No, they're not as crazy as the deep-fried butter and deep-fried Kool-Aid from years past, but the new food offerings slated for Erie County Fair 2018 bring a bit of a "wow" factor.

Fair organizers rounded up the media for a preview of new foods for the festival that runs Aug. 8-19 at the Hamburg Fairgrounds (5600 McKinley Parkway, Hamburg).

Here's a closer look at three of the 10 contenders in the New Fair Food Showdown, which will be judged by local media at 11:30 a.m. Aug. 9, and then a quick peek at an embattled returnee for the 2018 event. The deep-fried Piggy Mac is one of the other newcomers, not featured at the preview, that would be an intriguing spectacle.

Doughnut grilled cheese with bacon from The Big Cheese

What it is: A glazed doughnut, cut in half, grilled and filled with American and cheddar cheeses and a few strips of bacon.

Why it's wild: It's gooey, messy and decadent. Cheese, doughnuts and bacon – separately – are three of the most beloved comfort foods, so why not pair them all together?

More to know: The Big Cheese's Jack Kolassa is happy to accept suggestions from friends and family, and they've been pushing for a doughnut-based delicacy for some time, he admitted. Grilling a pre-made doughnut is no simple task, Kolassa learned, as a lack of focus means the doughy bottom can burn in no time.

"We tried different cheeses, but it turned out that simple cheeses like American and cheddar let the taste of the doughnut and bacon come out," Kolassa mused. "It's a nice balance between the sweetness and the bacon – sweet is the more dominant flavor."

The vendor, which does not have a brick-and-mortar location, added that the Yancey's Fancy Buffalo wing cheese and Buffalo wing grilled cheese would return to the menu after past success. 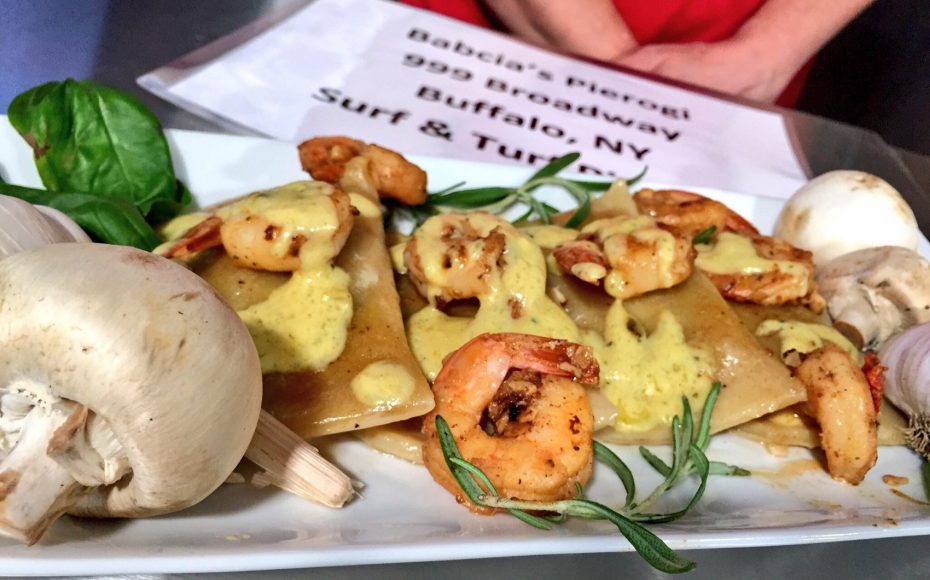 Babcia's Pierogi, based out of the Broadway Market, will debut a surf-and-turf pierogi at the Fair. (Ben Tsujimoto/Buffalo News)

What it is: Pierogi filled with shaved beef, mushrooms, onions and jus, topped with grilled shrimp and a creamy Parmesan sauce.

Why it's wild: Perhaps it's not wild to Babcia's, which rolls out 22 flavors from its spot inside the Broadway Market, including a "pizza-rogi" bacon cheeseburger pierogi. For the eater, though, this style pierogi gives a suggestion of upscale while being entirely approachable (then again, who finds a pierogi unapproachable?).

More to know: Maybe the Millennials are to blame, but maybe we should thank them. When it comes to pierogi, the days when potato, farmers cheese and sauerkraut were the only three options are long gone. According to Babcia's founder Linda Lund, whose family makes pierogi for Christmas and Easter, this sense of tradition has "gotten lost with the younger generation, as a lot of younger kids won't eat the sauerkraut." Fair enough.

Although the surf-and-turf, suggested by Linda's husband and co-owner, George, and their co-worker Paula, is the featured item for the New Foods Showdown, the apple a la mode dessert pierogi, which is dipped in graham-cracker crust and served with caramel ice cream, is more our speed. 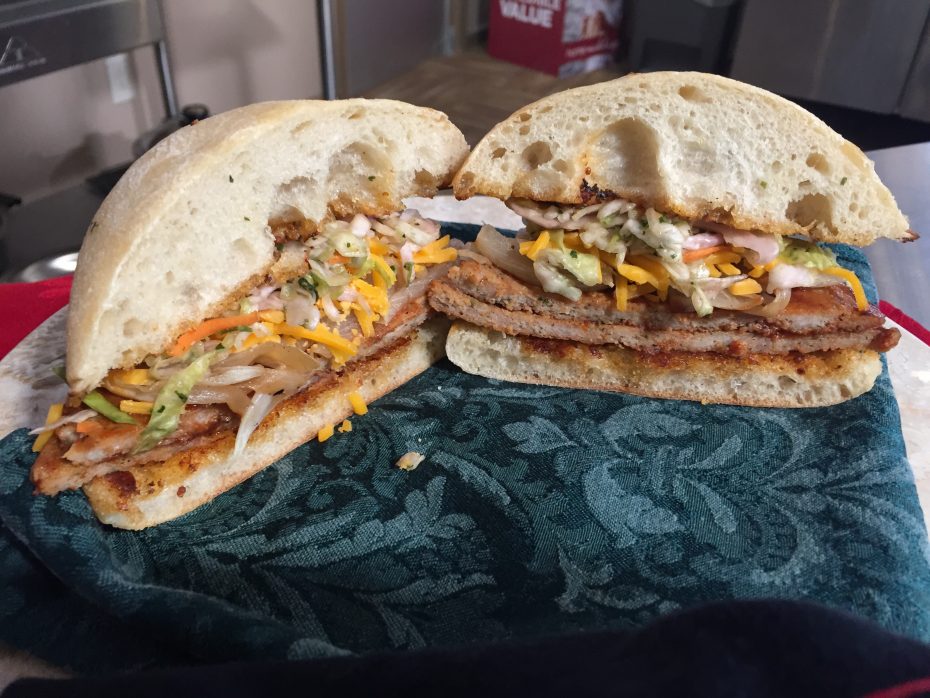 The Dirty Bird is a healthy option from Mineo & Sapio, but its presentation is compelling. (Ben Tsujimoto/Buffalo News)

The Dirty Bird from Mineo & Sapio

Why it's wild: It certainly has a snazzy name, reminiscent of the late-1990s Atlanta Falcons, and the Dirty Bird manages to be both colorful and aesthetically pleasing while retaining some health value. Representative Tony Ocasio noted that each of the two thin patties has just 3.5 grams of fat. "It's filling," he said. "You probably won't be able to eat the whole thing." Don't doubt me, Tony.

More to know: Ocasio and his Mineo & Sapio workers at the fair are excited about this year's space, which will be highlighted in the festival map released Aug. 1. After not having any seating last year, Mineo & Sapio will have nine tables that will seat roughly 65 people in total, an inherent business edge.

"When you're walking around the Fair all day long, people want to sit down," Ocasio said. 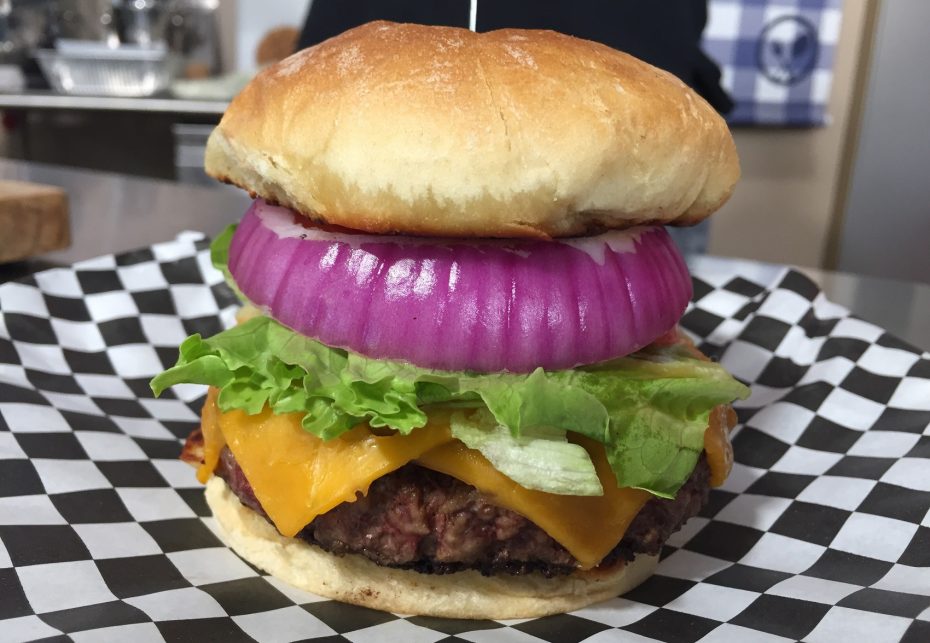 Known for its chicken, Weidner BBQ pays tribute to the original hamburger for 2018. (Ben Tsujimoto/Buffalo News)

They're back! The 1885 Burger from Weidner's BBQ

What it is: It's a big, simple burger. You can find it this year under a tent at the Avenue of Flags.

Why it's wild: The burger itself is not really that wild – although some of the spice rubs used for their barbecued chicken are woven into the burger mix – but it's a tribute to the Menches Burger, the alleged first-ever hamburger, crafted at the Erie County Fair in 1885. The original burger was made with coffee grounds in the meat mixture; Weidner's tried repeatedly to make that unusual ingredient work – but couldn't create something exceptional. Probably for the best.

More to know: Weidner's has scrambled to return after a fire ruined its Fair stand, which had existed for five decades, last summer. The barbecue chicken standouts won't miss a year, however, even though Ryan Gerber – grandson of founder Bert Weidner – remembers the circumstances surrounding the fire vividly.

"It was chaos," he said. "I was there, fortunately, but we didn't even know it was happening – you could see it only from the outside. There was no fire in the back – it was all up in our chimney. I'm glad no one was hurt, but obviously we would have loved to save it."

The Weidner family has built a temporary structure, in pieces, to transfer over to the Hamburg Fairgrounds over the course of the next 12 days. One perk, however, is the barbecue specialists will now have charcoal pits instead of gas at their disposal, cooking the poultry and burgers more evenly and lending a tasty char.