Food-focused operations made up nearly half of the grant recipients awarded by Ignite Buffalo judges earlier this month.

Ignite Buffalo selected 27 local small businesses to receive a combined $1 million in grants as part of a Facebook-funded program aimed at helping promising operations take their next step.

Small startups working on establishing urban farming programs, fermented foods and seed crackers were among recipients of the largest awards. Here's a closer look at some of the food businesses that hope to use the Facebook fertilizer to power them into their next phase, along with a year's mentorship through state startup incubator 43North, with help from M&T Bank:

A $100,000 recipient, Gro-operative aims to help create a food hub in an East Side building, raising plants and fish in an interconnected, sustainable ecosystem while training students for urban agriculture jobs.

It's currently in the pilot program phase in the basement of a University Heights hydroponic store. 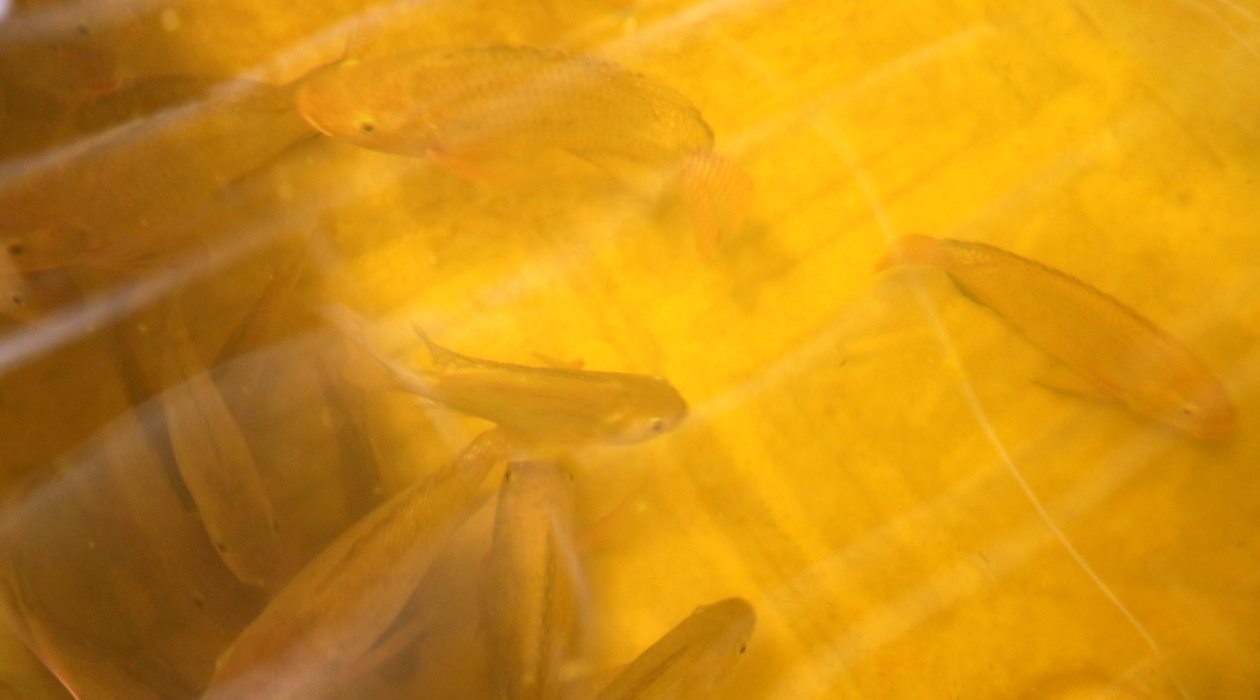 A look inside one of Gro-operative's 250-gallon tanks. (Mark Mulville/Buffalo News)

There, Michael Zak, two other worker-owners, and volunteers are raising tilapia and ornamental goldfish in 250-gallon tanks.

Fish waste, passed through filters, is used to nourish plants like basil, microgreens and collard greens, grown under LED lights. The basil is sold to the Lexington Co-op's two locations, the East Aurora Co-op, and other customers.

Zak graduated from the University at Buffalo with a bachelor's degree in philosophy, with an emphasis on environmental ethics. He wanted to create a business "that would change the way we grow food in America, respecting the environment, while respecting workers' rights," he said.

At first, he was daunted by the capital and real estate needs of starting a traditional rural farm.

"When I found out about this technology, and the growth of vertical farms throughout the world, I said, 'Wow, there is a way to do it in the city. Why don't we have fresh organic food that will one day be from renewable energy in one of these old factories, and give people good careers?' "

Zak said the operation plans to move to the Genesee Street site of Groundwork Market Garden, another Ignite winner, late this year. There, it'll have 5,000 square feet, three times as much room, and become the indoor part of a site where fresh food is produced year-round. Another partner, African Heritage Food Co-op, will be setting up a retail grocery as well, he said.

"The three of us will be doing a youth training program for at-risk youth on the East Side," Zak said. About 20 students at a time will embark on a nine-month program, with a curriculum he's developing now. For the last four years, Zak has taught construction skills to at-risk youth in the WNY YouthBuild program.

Its aim will be to steer trainees into jobs in a food-related area.

First, he has to fix up the building, which needs structural work and roof repairs, Zak said. They'll also work to harness solar energy for electricity, and an anaerobic digester on site, "so we can source more waste and turn that into electricity and heat."

"We started with an idea," he said, "then turned it into a small little system to get our feet wet." 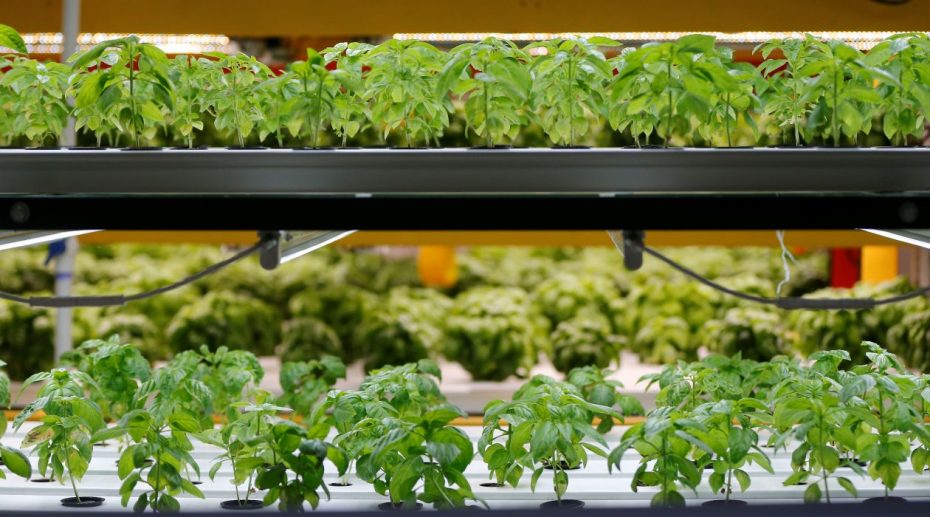 Groundwork is an organic farm on Genesee Street.

"We've turned a vacant lot into a productive USDA-certified organic urban farm in an area that's a certified food desert," said Mayda Pozantides, partner in the farm with Anders Gunnersen. "The people in this area lack access to healthy fruits and vegetables."

In its third season, the farm sells its products at a stand, the North Buffalo Farmers Market, and to restaurants.

It also supplies vegetables to members of its community supported agriculture program, which is a farm subscription. Currently at 30 members, the program can hopefully expand next year, one of the effects of a $50,000 Ignite award, Pozantides said.

The money will support efforts to use more of the property, which has vegetables growing on about half. Local youth have been working these this summer, and "we want to expand that programming," said Pozantides, who is a former teacher.

Last year, Groundwork bought an abutting 40,000-square-foot warehouse that Gro-operative is planning to move into. "We want to expand our production indoors so we can produce year-round revenue streams," Pozantides said.

Groundwork plans to create an educational space there, too, for school and volunteer groups to use.

Another plan: a commercial kitchen, "so we can process our own food products and diversify our products that way," she said. It could also be used for events like cooking classes. "We also want to have space for other like-minded businesses – health-centered, food-oriented – to join us on the East Side."

Barrel + Brine had already planned to move into a larger Chandler Street space later this year, adding a taproom and café.

The grant will mean the purchase of a 400-square-foot walk-in cooler "that will allow us to store more product and obviously bring in more produce from farms," said R.J. Marvin, who owns the business with his wife, Lindsey. 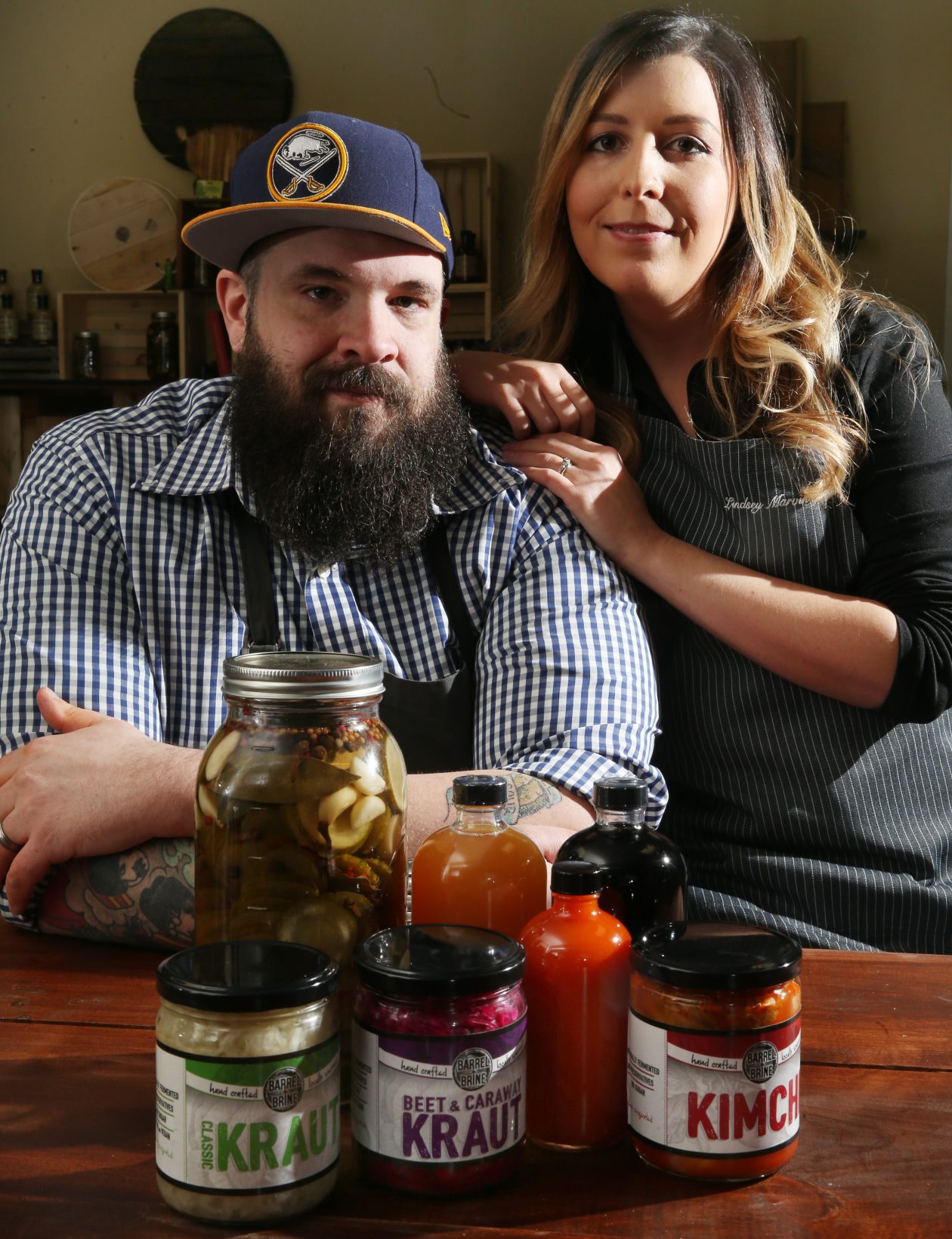 "We're going to buy some bottling equipment and an industrial cabbage shredder, so that instead of making 500 pounds of sauerkraut a month, I can make 2,500 pounds," he said. "Lindsey's kombucha production will go from 900 liters a week to like 5,000-liters-a-week capability."

The business could add eight new jobs by 2019, he said.

Barrel + Brine has products like its horseradish dills and kimchi available for sale in many area Wegmans supermarkets, all Feel Rite stores, Whole Foods, and both Lexington Co-ops.

"With the new capabilities, we should be able to start making enough product to start having legitimate conversations with distribution companies that can carry our products, not only throughout New York State, but Pennsylvania, Ohio and beyond," R.J. Marvin said.

"Basically, after we move into the new space, the grant will allow us to do what we planned to save up money and do in two years."

A $50,000 Ignite grant also will be a game-changer for TopSeedz, the seed cracker company founded by Rebecca Brady.

The New Zealander lives in Clarence, where she moved with her Irish husband, William Brady, who works at Moog.

They're raising three children, 11, 13 and 15 years old. In her spare time, she started a company that sells crackers made from seeds, flavored with sea salt, cumin or rosemary, rolled out and baked to a crisp.

She started selling them in 2017 in Horsefeathers, then local co-ops, the Clarence Center Café, Squeeze, O3, and Salt.

Then she got into some area Wegmans and Whole Foods. Now demand has exceeded supply. In her rented kitchen, she must use "four little ovens in two rooms, and I'm running back and forth, rotating trays manually," Brady said.

"With this money, I'm going to be able to buy an oven the size of a small bathroom, and roll trolleys in filled with crackers, and the oven will rotate them," she said. "Another piece of equipment will roll the crackers out for me. At the moment, I'm rolling every cracker out."

She expects to able to produce 700 boxes of crackers a day instead of 350, and work more days.

Next to be pitched: Rochester-area Wegmans.

Others receiving $25,000 grants include: