Doors at 5 p.m., headliner hits the stage around 8, show is done by 10:30 on July 26 at Canalside (44 Prime St.). Cost is $5 and comes with a free drink ticket if you purchase in advance at Consumer's Beverages.

When the 2018 Canalside Live! lineup was announced, this multi-talented Maryland-born musician was the social media darling (alongside Vanilla Ice, of course). In his initial report, The News' Jeff Miers said that Misty is making "some of the most thoughtful popular music in recent memory."

While recording several albums under the solo name J. Tillman, the artist also toured as the drummer for Fleet Foxes - also coming to the Buffalo area this week - before breaking out under new moniker Father John Misty.

5:30 to 9:30 p.m. July 25 at the Four Corners in Orchard Park (West Quaker and North Buffalo streets). Free to attend, although the food ranges in price, by item.

A whopping 78 vendors will set up around the Four Corners in Orchard Park, spotlighting the village's restaurants, ranging from pizzerias to bars to dessert specialists. Ten mobile eateries - four focused on desserts - will congregate in Food Truck Alley. If you're salivating at the thought of food, then here are five foods to try at the Taste.

Find a handy PDF of the festival layout, as well as the individual offerings from the restaurants, here. Like the Taste of Buffalo, there will be wine slushies available.

When media outlets write quick previews of coming shows, they'll tend to latch onto keen, active descriptions of the band, which every other source will imitate. For The Struts, it's that the English rockers are "dangerous and glamorous," terms originally (as far as we can tell) pegged by the Georgetown Voice's Sarah Pavlak. Chalk up a victory for college journalism!

If you can't make Luke Spiller and friends' show in Niagara Falls, there are September opportunities in Toronto and Albany on a North American tour the band just announced.

The colorful Hospice fundraiser invades RiverWorks on Thursday with the usual perks: cocktails, dinner, dancing, auctions and music from JoyRyde and an outstanding balloon selection.

Look back at News Smiles photographer Matt Weinberg's gallery from last year, where attendees enjoyed the venue's indoor and outdoor spaces. Hospice Buffalo focuses on care, support and advocacy for those suffering from serious illnesses. 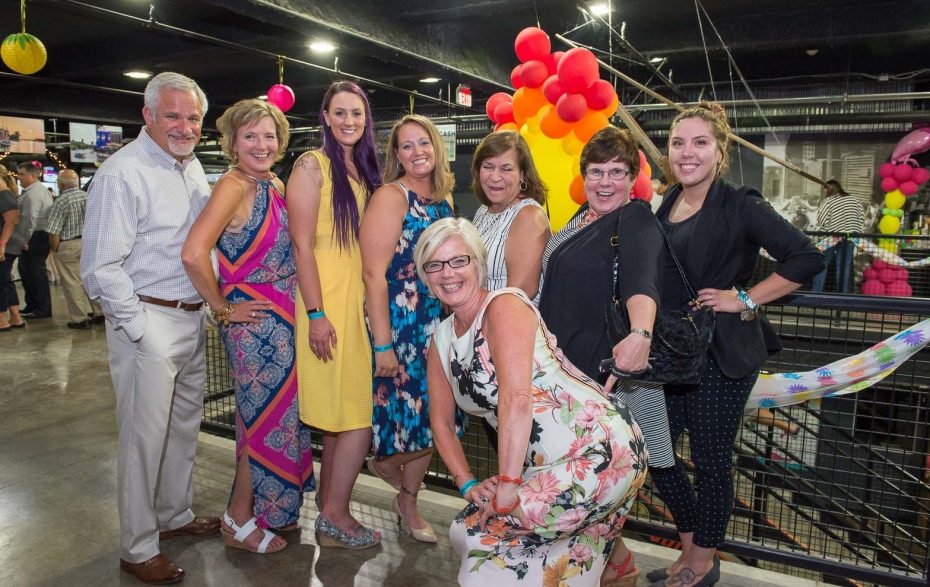 Smiling faces at Buffalo RiverWorks for the Hospice Summer Affair in 2017. (Matt Weinberg/Special to The News)

July 23-28 in several venues, including Pausa Art House, Hallwalls, the Historic Colored Musicians Club and more. Full music lineup here. Festival passes run for $95 general admission, $145 for VIP and $85 for student. Many tickets for individual shows are cash-only and sold at the venue. Ticket details here.

There will be several chances to take in the Colored Musicians Club's annual Jazz Fest, which graces multiple venues over the course of the week.

Slow Roll Buffalo leads into a 7 p.m. Monday performance at the title venue, 145 Broadway, featuring the Katy Miner Quintet, followed by a blend of intimate shows leading up to the daylong outdoor festival Saturday.

Among the smaller events, the four-part round-robin jazz piano special on Thursday night in Hallwalls, based on the music and style of Cecil Taylor, caught our eye.

It's been a strong run, Warped Tour. From the days at LaSalle Park, which featured a pre-stardom Eminem, to Wednesday's finale on several stages at Darien Lake, the musical festival conjures up fond memories from many a music lover.

Among the recognizable names hitting the last iteration is Frank Turner, 3Oh!3, Mayday Parade, Simple Plan, Every Time I Die, Senses Fail and more. Full lineup can be found here.

Although it's unfortunate that Lewiston won't hear the full "Dark Side of the Mule" Pink Floyd interpretation by Gov't Mule, the Tuesdays in the Park crowd should plead for a few Floyd covers.

Niagara Frontier Publications' Joshua Maloni interviewed the band's frontman Warren Haynes, who once starred for the Allman Brothers Band, in advance of the show. The longtime jam band is versatile, for sure - Maloni's interview discloses that Haynes and friends play a different set list every night.

He's young (31), tall (6-foot-4) and an accomplished songwriter, having written Florida-Georgia Line's big-time hit, "Cruise." (Hey, no one can make Chevy references quite like Chase!). The country musician's last area visit came in summer 2016, when he headlined a gig at Lancaster Speedway.

Get fired up for the 2018 Buffalo News Runner of the Year race, which gallivants around scenic West Ferry (is that a stretch? There are nice houses). The post-race party is strong, too, with a picnic dinner, beer, pop, music from the Scott Celani Band and an awards ceremony. Friends of runners may attend the later festivities for $10 - tickets here - too.

Five events to anticipate for the weekend:
- Cobblestone Live Music Festival in the Cobblestone District
- Ludacris at Canalside Live
- Niagara Wine Festival in Lewiston
- Brews and Wines on the Water in Gratwick Park
- Kingdom Bound at Darien Lake