“This is a staple, like a Buffalo staple,” a passing young woman told her friend while pointing at Chris’ NY Sandwich Co., where I sat under an awning barely providing refuge from the mid-summer heat.

One would never guess this business lost everything in an electrical fire a little over a year ago. Since Chris’ opened back up in June in stride, it’s continued to fulfill its reputation as an essential downtown lunch spot with massive portions and now, updated interior design.

The deli restaurant teemed with customers on that sunshine-filled Tuesday afternoon. Under several short red awnings, metallic tables with fresh flowers bordered the sidewalk patio, each full with people taking in a scenic downtown view of Delaware Avenue. Watching food come out, I hungrily anticipated a turkey, green apple and melted Brie sandwich.

The most accurate way to describe the portions is to say they are deceivingly large. What appears to be a respectable-sized sandwich becomes much more daunting halfway through consumption.

Classic deli sandwiches are liberally loaded with meat and toppings, ensuring not even the hungriest of customer hungry. Only a couple of diners left the restaurant over the course of an hour without a Styrofoam to-go box. 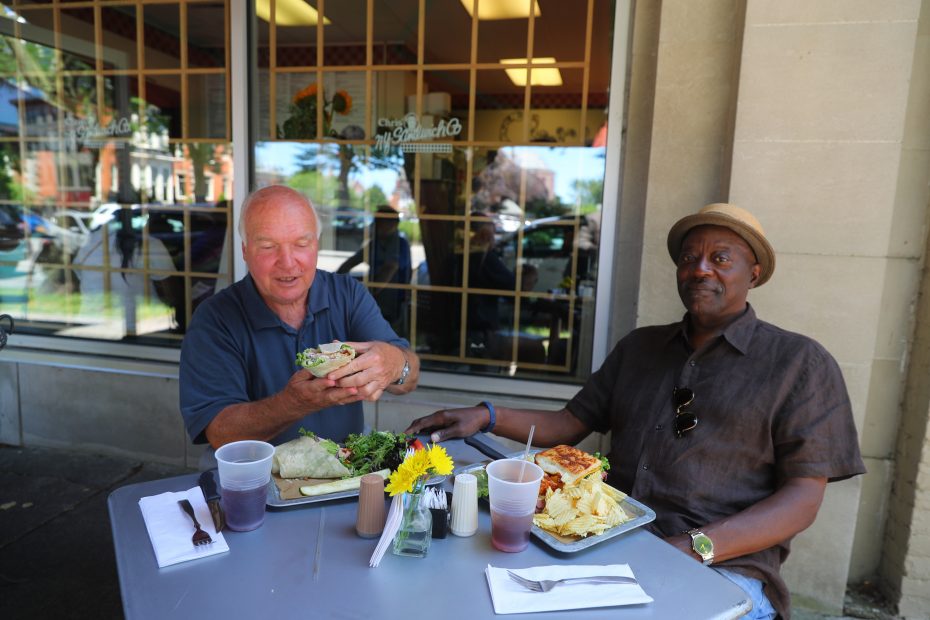 John Gardner shows off the size of his taco and Duane Crockett enjoys a pastrami and Swiss sandwich on the patio at Chris' NY Sandwich Co. on Delaware Avenue. (John Hickey/Buffalo News)

Laminated menus depict an overwhelming-in-the-best-way selection of bread-meat-cheese combos, from stacked classics like ham, turkey, tuna or capicola (all served with lettuce, tomato and cheese, on your choice of 10 breads, $9.50-$11.95) to specialty choices including a trendy goat cheese and arugula pesto turkey burger or a turkey jalapeno club ($9.95-$12.95).

Further down the menu is an almost equally overwhelming amount of salads for a healthier choice. Similar to the sandwiches, simple and customizable turkey julienne, grilled chicken and Caesar salads ($7.95-$10.95) are available alongside their "boujee-r" counterparts, a walnut-encrusted goat cheese salad, Anjou pear and grilled Portobello salad ($10.75-$13.95).

Each entree is served with chips, but a plethora of sides straight out of a family barbecue can be added, like tuna salad, macaroni salad, cottage cheese, fruit salad and several choices of fries ($2.50-$4.95). 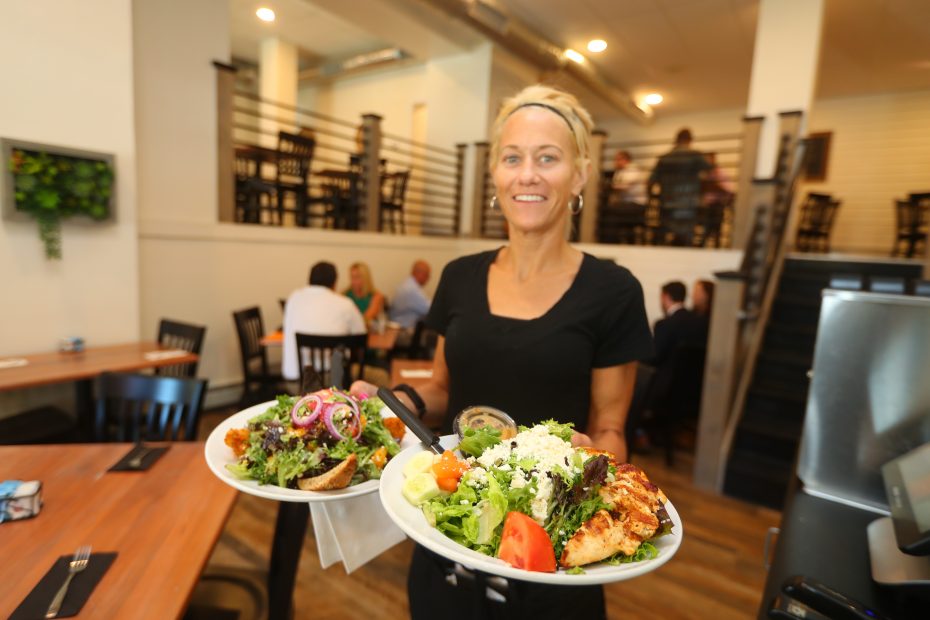 Server Courtney Appleton brings out the grilled chicken and feta salad and panko chicken strawberry and pecan salad - one of the healthier options at Chris's Sandwich Shop. (John Hickey/Buffalo News)

Outside, a sprightly, older man greeted customers on the sidewalk and took photos of the place.

“Are you getting stood up?” he came over to me and chuckled.

“I actually chose to come alone,” I answered, gesturing to my laptop. I thought I could sneak some work in, but learned it’s a more social environment for business meetings and casual catch-ups over gargantuan subs than a place to go alone, at least not without a book, newspaper or something that doesn’t require internet to keep you occupied. (There is no Wi-Fi.)

It’s not an in-vogue, new restaurant pop-up that garners a lot of attention -- it doesn’t have succulents or twinkle-lights -- but it’s a classic, a “staple” as the passerby called it, and it sees a full lunch crowd. Chris' is the kind of place an idealist might think all deli restaurants are like, only to be inevitably disappointed someday, but at least they can come back here. Not even a fire can keep them out of business long.

As for my turkey, apple and Brie sandwich? Delectable, refreshing and with the chunky cranberry sauce, tasted a lot more like a Thanksgiving dinner than I expected, in the best way.

“Next time you come here alone, I’ll keep you company,” the same man, who turned out to be owner Chris Vendetti’s father, Ed, said warmly upon my departure. They don’t call Buffalo the City of Good Neighbors for nothing.

Handicapped accessible: Yes. There are  no steps to enter and a first-floor with a seating area.

*Read more Cheap Eats by clicking the tag, below.