An emaciated common raven hopped like a rabbit up a makeshift wooden ladder at the SPCA of Erie County.

The year-old bird feasted on a platter of moistened cat food, mouse, smelt, blueberries and strawberries.

The bird had just spent some two months living in the rafters of a pallet warehouse at the Bethlehem Steel site.

Its appetite: ravenous, of course.

"They’ll eat just about anything," said Barbara Haney, the SPCA’s director of wildlife. 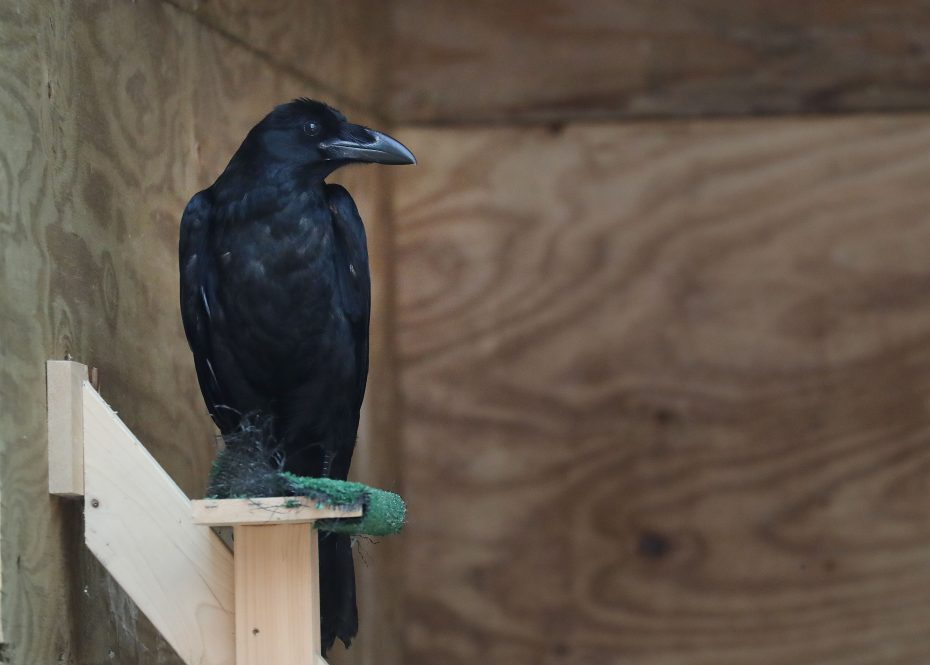 The raven was dropped off at the SPCA earlier in the week by an employee of Father Sam’s bakery after it apparently hitched a ride there atop a pallet truck.

Haney said the SPCA tracked the origin of the truck to Advantage Pallets in Lackawanna. An employee there told the SPCA that the bird took up residence in the rafters of their warehouse over the spring.

"I wish they’d have called us two months ago," Haney said Friday.

The raven appeared listless and was covered in what seemed to be a thick coating of motor oil. Under that was just feathers and bones, SPCA officials said.

When the raven was admitted to the SPCA wildlife hospital in West Seneca, it was as emaciated as an animal could be and still be alive.

"His body condition was a 1 out of 5," said Allie Booth, supervisor of the SPCA’s wildlife hospital. “He was as low as you can go.”

The first step was cleaning the bird.

SPCA staff used mineral oil to break up the sticky black oil that coated the raven's wings and body, then used their fingernails to scale away residue from its wings before giving it about a half-dozen baths and rinses in Dawn dish soap and water.

"You try not to form emotional bonds," Haney said. "But, when you see this bird covered in oil, it’s hard not to."

The goal now is to bulk the bird up for a few weeks.

It’s not believed the bird had any broken bones or wings.

It flew for the first time Friday when a reporter and photographer visited its enclosure at the SPCA’s Harlem Road site.

"It’s amazing what a little TLC will do," Haney said.

Next for the bird: blood work, an X-ray and another weigh-in.

SPCA officials said they aim to release the bird back to the wild after at least a month of rehabilitation.

"We want to get him back to where he came from," Haney said. "If we can find there’s a place where there’s another raven near him, that would be the best place.

"I doubt he was born and bred in the Bethlehem Steel building."

The common raven can be found in the Western states, across Canada and in the upper Adirondacks, but have remained relatively uncommon in upstate New York, according to Audubon’s Guide to North American Birds.