Clearly, after 150 years, Young & Swartz is not a company to be brushed aside.

The company began manufacturing industrial brushes on Cherry Street in downtown Buffalo in 1868.

That year also proved to be a significant one in the country's history. The 14th Amendment to the U.S. Constitution granted African-Americans full citizenship, the House of Representatives impeached President Andrew Johnson and then the Senate acquitted him, and Thomas Alva Edison applied for his first patent.

Yet, after all these years, the family-run business has remained a well-kept secret.

That may be because the company operates in a small building off the beaten path with its facade facing an on-ramp to the Kensington Expressway.

And then there's the product.

"There is nothing glamorous about a toilet bowl brush," said Paul Winzig, who owns the business with his wife, Evelyn, and father, Raphael "Ray" Jr. "It only becomes special when you need it." 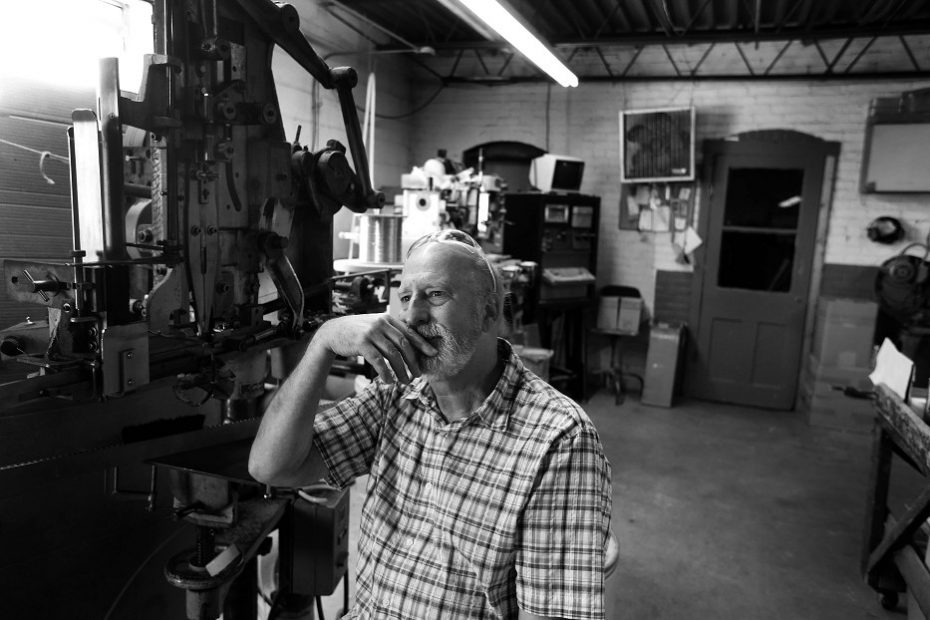 "We all take great pride in the fact it's still here," says Swartz & Young co-owner Paul Winzig. "To me, every day it goes is just icing on the cake." (Mark Mulville/Buffalo News)

Young & Swartz, which does wholesale distribution and retail, is not the oldest business in Buffalo. At least three law firms date back to the early 1800s, beginning with Hodgson Russ in 1817. A couple of banks started in the mid-1850s. And a smattering of other businesses began several years before the brush manufacturer.

"We all take great pride in the fact it's still here," Winzig said. "To me, every day it goes is just icing on the cake."

The story the company has told over the years has Young & Swartz starting in 1866. That's what it says on company business cards.

But a year-by-year search in Thomas' Buffalo Business Directory reveals that Frank Young started a business on 32 Cherry St. in 1868, two years later. Young moved the business the following year to 83 Cherry, before relocating to 39 Cherry in 1871, the current address.

Valentine Young, almost surely a relative, began a brush business in 1866, but it was at 323 Batavia, which became 323 Broadway when the street name changed. No documentation suggests Valentine and Frank Young ever worked together.

Meanwhile, Frank Young's company changed its name by the early 1890s to Young Bros. The company merged with Benjamin Swartz in the 1920s to form Young & Swartz Inc. 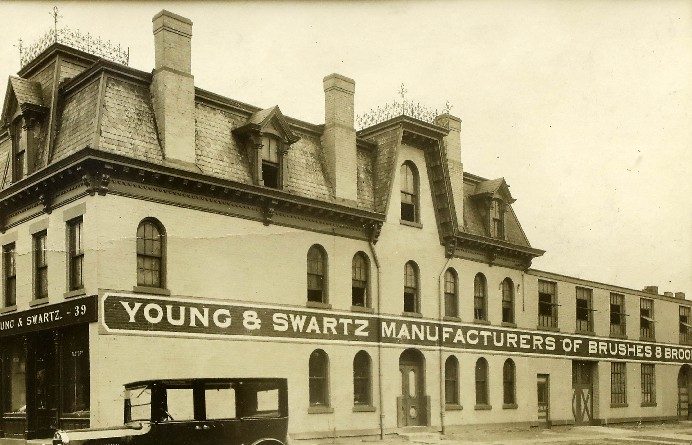 A photo of a 1924 photo of the Young & Swartz building on Cherry Street in Buffalo. (Mark Mulville/Buffalo News)

Raphael Winzig, Ray's father, a nephew of Young and Swartz through marriage, got involved in the business after returning from military service in World War I and became part-owner. After he died on Jan. 1, 1950, his children Earl and Jane helped run the business for the next several years.

Ray Winzig, who graduated Bennett High School the year his father died, became involved with the business out of a desire to help the family.

"It was satisfying work," Ray Winzig said. "I enjoyed helping our customers and the challenge of solving problems in the industrial field. It was always interesting to me, and it still is."

The Winzigs doubled their square footage by buying two next-door buildings in the early 1960s.

Ray Winzig, 85, still makes brushes at home while Paul runs the Cherry Street business. He is currently working for a Niagara Falls client on a customized brush with brass bristles for use in an industrial application.

Ray Winzig said he considered updating the company's name in the past, but nothing came of it.

"We retained the name because of historic implications," Ray Winzig said. "I often thought of modernizing the name, and making it Buffalo Brush, or something like that," he said.

"There's a little bit of Buffalo in every brush," Ray Winzig said, noting the logo features a Buffalo inside a brush.

The closest the brush manufacturing business ever got to glamour was "The Fuller Brush Man," a 1948 movie that starred Red Skelton. "The Fuller Brush Girl," a less-known film starring Lucille Ball followed two years later.

The Fuller Brush Co., established in 1906, was known for its sales force that went door-to-door selling an array of brushes for home use out of suitcases.

"We're not a Fuller Brush," Ray Winzig said. "We weren't door-to-door toilet brush salesmen. We had hair brushes, but that wasn't our focus.

"We make a lot of brushes for specific jobs," he said. "That's our bailiwick. We depend a lot on that custom brush. It's probably 75 percent of our business," he said. 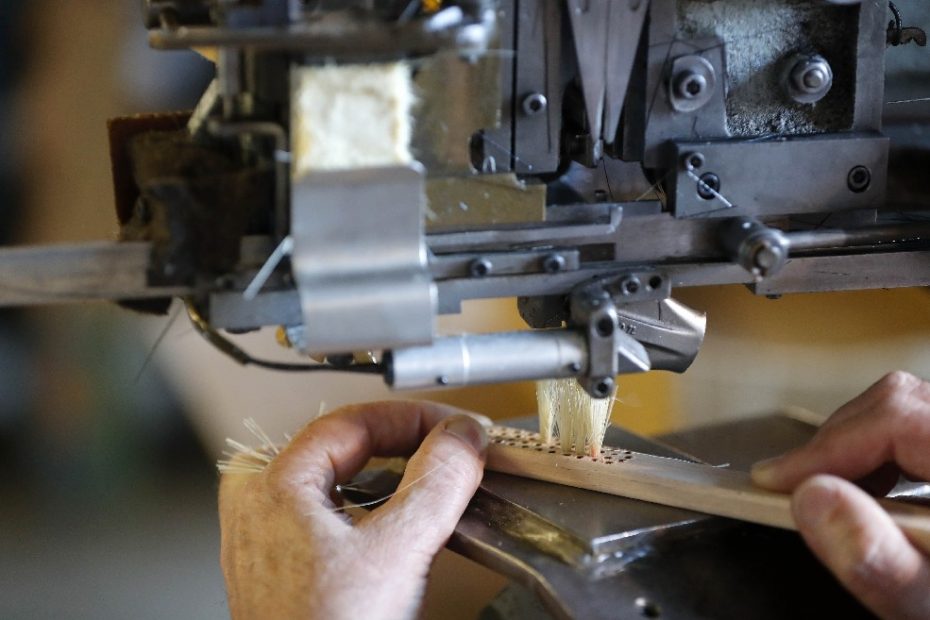 Paul Winzig makes a hand brush at the factory of Young & Swartz in Buffalo on Monday, July 9, 2018. (Mark Mulville/Buffalo News)

The brush's solid backings are primarily made in wood and also metal, while the flexible backings are in plastic and leather. The bristles are primarily synthetic. About 25 percent of the natural bristles are from animal hair, including horse, badger, hog and goat, and the rest from vegetable fibers mostly imported from Mexico. There are also bristles made of wire.

"You don't think about it, but you use a brush every day," Ray Winzig said. "You brush your teeth, your wife cleans the dishes, you have to clean up the mess in the floor in the garage with a broom. You have to paint."

"We were the only company around in this area, and we stayed in our own backyard," Ray Winzig said. "Many others branched into janitorial supplies and chemicals to expand their businesses, but we carried only a very limited amount of that, more for customer convenience."

Paul Winzig occasionally gets a strange request, but a recent one topped the list.

"My favorite request happened earlier this month," Winzig said. "We were closing up the place and the doorbell rings. This kid's at the back door and he says to me, 'Is this the mop place? It says you have brushes and mops.'

"He said he was working on a slasher movie here in Buffalo, and there was a scene where they were trying to splatter blood on the actors and it wasn't having the right effect," Winzig said. "I showed him an original urn brush that's known as a colt swab with a tail. He got a hold of it and he said, 'Oh, I can see the blood going," and he took a couple of mops.

"You know who I sell these mops to, mostly?" he said. "The guys who do the barbecues. They love them for slopping ribs."

About three years ago, Young & Swartz made an experimental brush for a client in "the deep South" that simulated the reeds in a swamp for a fish hatchery. The fish laid their eggs in it.

With around 10 manufacturing machines on the second floor, about half of which are used with regularity, Winzig can often be found working on various brush projects.

The machines punch holes and fill them with bristles for brushes that come in all different sizes and shapes for use in many different applications.

Paul Winzig has been maintaining and retrofitting the machines, including the use of outdated computers, since the 1970s.

"I'm mechanically inclined, but he's about 10 times smarter," Ray Winzig said of his son. "Even as a kid he was always tinkering with something."

The brush business, Paul Winzig said, is segmented and based on size and scale.

Their niche, he said, is ingenuity and the ability to respond quickly to small orders.

"I can do super short runs that nobody wants to do," Winzig said.

About 90 percent of the company's business is repeat business. But the internet has opened up opportunities.

"We recently took in a marvelous $17,000 order on the internet," Winzig said. 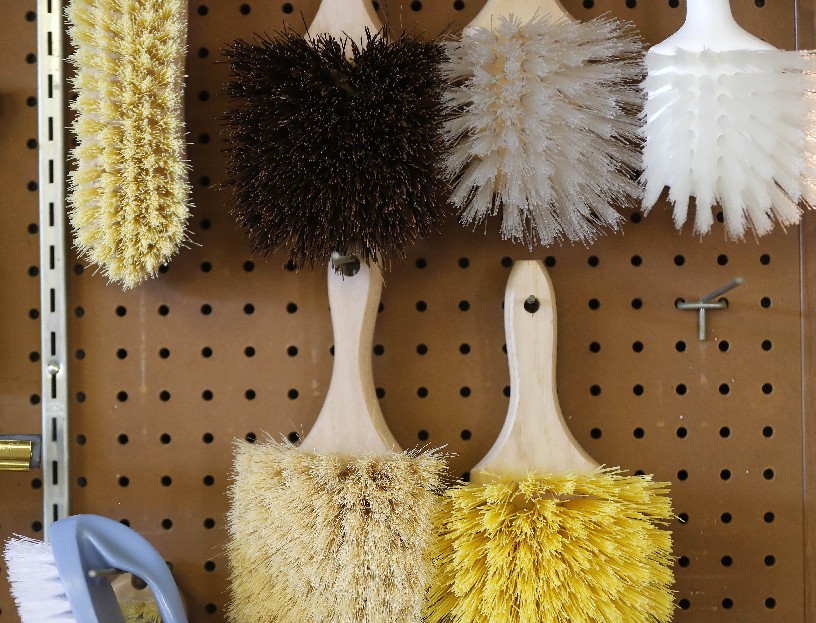 Brushes made at Young & Swartz in Buffalo. (Mark Mulville/Buffalo News)

Thanks to online orders, Winzig is currently developing a special timing belt brush for a chocolate manufacturing plant in Mexico, and a custom ring brush for a New Jersey company for a process that pushes out chocolate bonbons.

"We get a lot of fun out of helping people with the applications," Winzig said. "Some of them are doable, and some of them are just absolutely impossible.

Those at the new Tesla plant hope the company can produce for a brush for them.

"They told me they wanted to buy from Buffalo," Winzig said. "I don't have the equipment, so I sent it all over the country and it bounced back to me," he said.

Winzig is also trying to redesign a brush that helps remove pulp after grapes are crushed. They are also working on a prototype of a brush for the manufacture of whipped cream cans.

Winzig began working at the family business after graduating Kenmore East High School and attending Eisenhower College, a now-defunct school in Seneca Falls. He is encouraged about the future, especially by what he sees going on in Buffalo and from reading business news.

Over the years, staffing has dwindled. Once, eight employees worked along with the family members. Today, the lone employee is Brian Deeds, who handles shipping and receiving, and customer service.

Other mostly industrial companies that once operated within blocks of the company are gone, including Carton-Craft, Weinheimer and Whitney Printing.

But business remains steady, and the Winzigs still love what they're doing.

He gives them the brush-off.

"They swarm around this neighborhood in their Audis and their Beamers, come in the door and ask if we want to sell our buildings," Winzig said. " 'No, I make my living here,' I tell them. 'What are you going to turn it into, a brew pub or some kid's apartment?'

"I  just hope I can pass it on to somebody and keep it going, but I'm just not ready yet to do that," he said. "I'm proud to be a brush maker, and it's a fun craft."