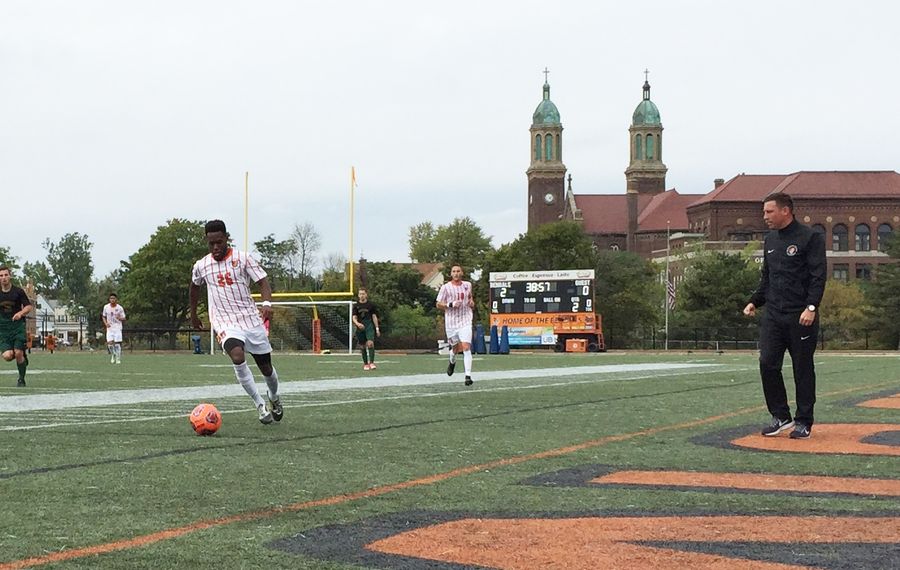 Mark Howlett had built a dynasty of sorts at Buffalo State College, leading the men's soccer team to new heights over the course of his five years as head coach. The Englishman had already claimed two SUNYAC Coach of the Year honors, with his staff earning Regional Staff of the Year in 2017 after the Bengals made the NCAA Tournament for the first time since 1984.

Bengals players and alumni were stunned by an email this week from Howlett, who announced he'd accepted the same position at SUNY Geneseo, a rival SUNYAC school.

"The decision we made is centered around our family," Howlett wrote. "My wife Regan grew up near Geneseo and will now be able to help care for her grandmother in her home, which is a big relief to the entire family. We had already been in the process of trying to figure out how we could be more supportive to our family, so when the position opened I had to explore that option."

Although there's been no official announcement by the Buffalo State Athletics Department, Howlett's email indicated that assistant coach Francesco Cardillo would be promoted into the vacant head coach position.

Josh Beshaw, who transferred to Buffalo State from St. Bonaventure before last season, partly in order to play for Howlett, reacted to the news.

"I didn't believe it when I first found out," he said in a message. "I have a tremendous amount of respect for him and his decision to leave. Howlett is the type of coach who's there for his players on and off the field, which is what I admire most about him. It's a tough loss, and I wish him the best."

At Buffalo State, Howlett was instrumental in furthering the careers of several of his players. Bass Sarr, a raw, athletic forward, developed dramatically to the point where he seized SUNYAC Offensive Player of the Year in 2016, then transferred to NCAA Division I school Cal State Fullerton.

Luke Pavone, an All-American as a redshirt senior, had long ago forged a bond with Howlett when the then-hard nosed midfielder first came to the United States. But thanks in part to Howlett's tutelage at Buffalo State - Pavone's landing spot after a difficult time at the University of Massachusetts - the pupil signed a professional deal in Israel for Hapoel Petah Tikva FC in June.

At SUNY Geneseo, former head coach Dominic Oliveri left the program after the 2017 season, his seventh with the school; his departure has yet to be announced by the college's website. The Knights knocked Buffalo State out of the SUNYAC Tournament with a quarterfinal upset, but the Bengals qualified for the NCAA Tourney with an at-large bid through their season-long resume.