After decades of neglect, the heart of the South Buffalo commercial district is getting new attention and investment.

Investors, developers and residents are purchasing and renovating old buildings, particularly the two-story structures that line the street, as well as some old churches.

They're sprucing up building facades and storefronts, using either their own money or government grants.

They're pouring time and money into plans for road redesign to slow traffic, enhance the appearance and make it more walkable.

"We haven't seen this sort of investment in South Buffalo in a very long time," said state Sen. Timothy Kennedy, D-Buffalo. "This is the sort of thing that's redefining the next generation of development in Western New York, and it's happening right here on Seneca Street."

Together, the efforts are bringing a new energy to one of Buffalo's oldest neighborhoods.

"I think what's taking place along the corridor is a great model for the redevelopment and revitalization of a commercial corridor," said Peter Scarcello Jr., part of the firefighting trio that makes up Hook & Ladder Development. "The relationship between the private and public sector along Seneca Street and within the community has been nothing short of amazing. It's the way it should be." 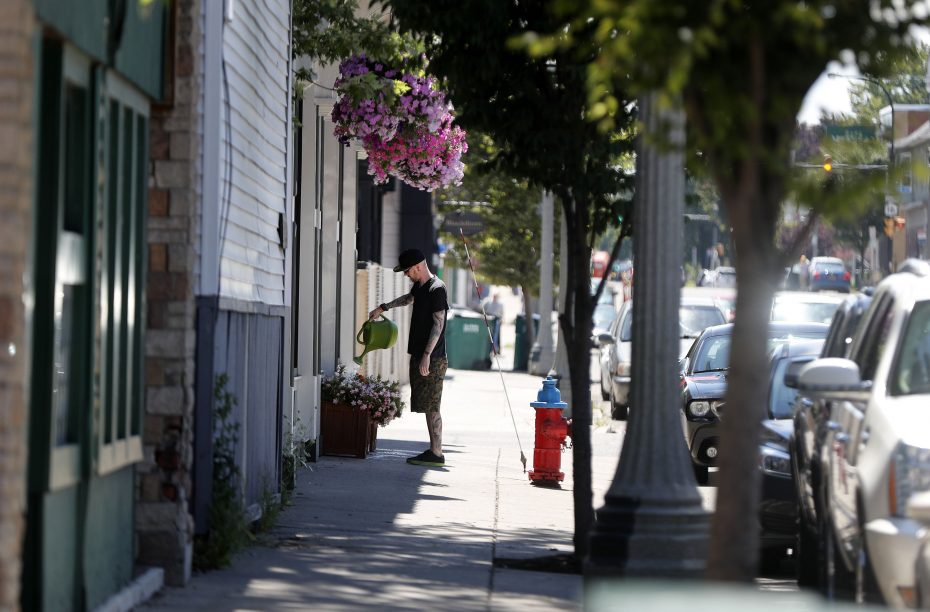 Buffalo has been undergoing a real estate renaissance in the last eight years as state, city, private investors and businesses have poured billions of dollars into redevelopment projects.

Downtown Buffalo has seen the bulk of the activity, with old or abandoned warehouses, industrial facilities and commercial buildings transformed into new apartment buildings, office space and hotels.

But as real estate prices downtown have soared, investors and developers have turned their attention and dollars elsewhere, to more affordable parts of the city, like the West Side and North Buffalo. And Buffalo's political leaders have followed up with improvements to Niagara Street, Hertel Avenue and others to create more vibrant neighborhoods that encourage walking and bicycling.

Now those opportunities are coming to the East Side – such as Jefferson Avenue and Broadway – and to South Buffalo. And locals couldn't be happier.

"People have been waiting for change to take place in that neighborhood for a long, long time," said architect and developer Jake Schneider, who's renovating the former Shea's Seneca building and a nearby bank branch. "There's a lot of enthusiasm."

The initiatives didn't start out coordinated, but the momentum came together quickly as various parties saw what others were doing.

The two projects totaled about $9.8 million.

Then Schneider bought the 48,500-square-foot former Shea's Seneca Theatre commercial building, which he is spending $9.5 million to redevelop into 23 apartments, a banquet facility and four retail spaces. He also purchased a former Liberty Bank and Bank of America branch that he's marketing as a unique restaurant, banquet or retail space, dubbed Liberty Seneca. 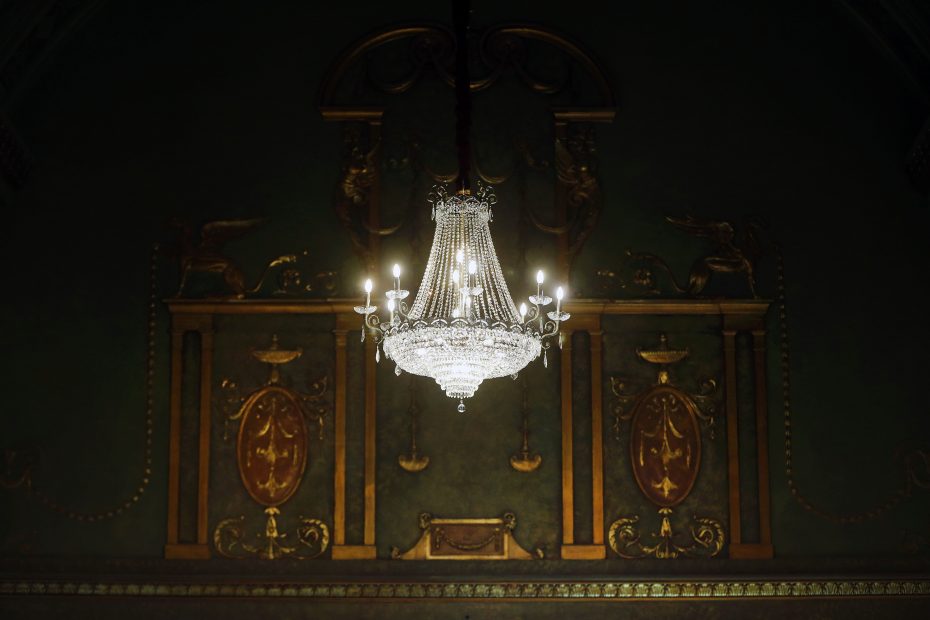 New chandeliers and a new floor are part of the renovation and restoration of the lobby of the old Shea's Theater on Seneca Street in South Buffalo. (Mark Mulville/Buffalo News)

"We've shown it to some people, and we certainly think it's a beautiful opportunity," Schneider said. "We're open to other investments in that area, but we have a lot on our plate right now."

And now Ellicott Development Co. is bringing the Western New York Maritime Charter School to Buffum Street, which Schneider noted is just "a stone's throw" from the back of Shea's Seneca.

"What's happening is the same thing that's been happening in the downtown. It's kind of a re-awakening of what people are looking for in lifestyle," Schneider said. "There's a lot of density, and that's what you need to have a successful commercial corridor."

Three Buffalo firefighters-turned-developers restored a century-old building at 2096 Seneca St., anchored by a barber shop that has been part of the community for decades, as well as a new photography studio.

The apartments upstairs will be available as of Aug. 1, but two are already pre-leased. "We already have a list a mile long of people who are interested in the remaining two spaces," Scarcello said.

The $500,000 renovation included gutting and redoing the interior, as well as investing in new lighting, entrances, landscaping and antique-style black signage for the storefronts.

Constructed in 1922, the building now features a new stone facade on the front of the lower floor, with red fiber-cement Hardieboard siding on the upper level that continues around the side.

The first floor includes Bob's Barber Shop, which has been at the building since 1958. Originally founded by Frank Campanile in 1935 and located further down the street, the business was taken over and renamed in 1975 by the founder's son, Bob, who continued operating it until he sold it in 1992. Subsequent owners have maintained the name and traditions, however, and Hook & Ladder dedicated the building Wednesday to Frank Campanile.

The second business is Studio on Seneca, which will specialize in family portraits and day-to-day photos. The studio, run by Erin Moran and Kari Vogl, will also display local artists' work and offer community photography classes for families. 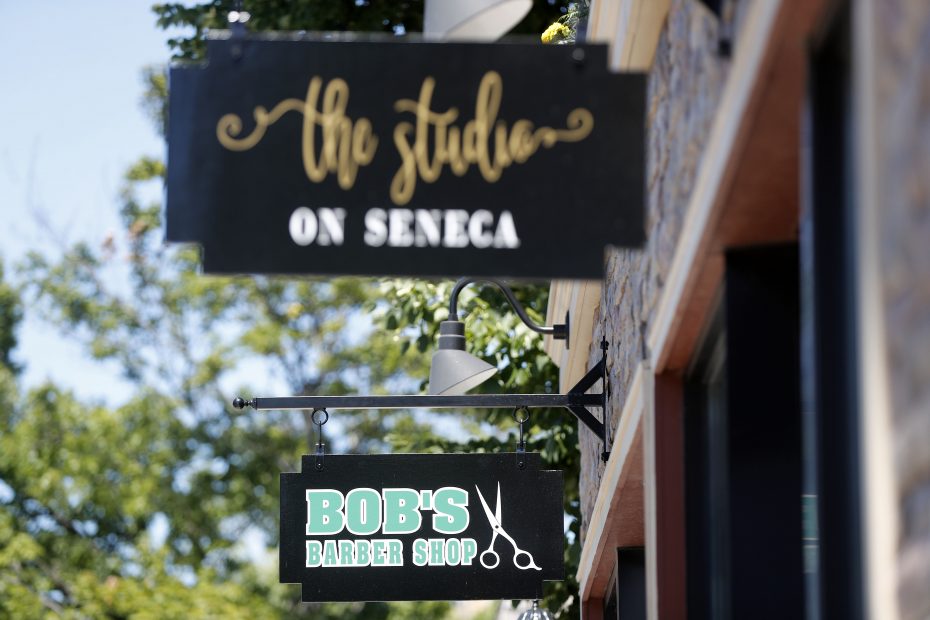 From firefighting to developing

"Everything from top to bottom has been restored or refinished or replaced," said John Otto, one of the other two partners in Hook & Ladder, along with Gino Gatti. "It's really top-of-the-line stuff, and that's what we're hoping to do with all of our units, especially on the Seneca Street corridor."

Two of the units are about 650 square feet, while the other two are slightly smaller at about 600 square feet, but "the finished and open concept makes the units feel larger," Otto said. Rents will vary from $750 to $900 per month.

This is the third finished project for Hook & Ladder, a relatively new entrant into the local development scene, with a specific focus on the South Buffalo neighborhood where they and their families are rooted.

The three firefighters – all members of Engine 21 in Buffalo – got their start buying and sprucing up singles and doubles, but have recently begun expanding their vision for revitalizing Seneca Street. The team is now spending several million dollars to buy up and renovate properties, mostly two-story buildings with first-floor retail and some apartments on top.

"These guys have not only made a very personal investment, but they have made a commitment to putting their vision into the neighborhood where they grew up, and reinventing really the bones and infrastructure of the neighborhood for the next generation," said Kennedy, who said he grew up with the firefighters. "What it's doing is captivating the entire community. An investment to the level they're doing is a gamble, but they're doing it in a way that's paying off."

The firm's headquarters is in another two-story mixed-use building that the trio renovated just across the street in its first venture. But it now has five other similar projects in various stages of work, mostly on its own with a handful of subcontractors. 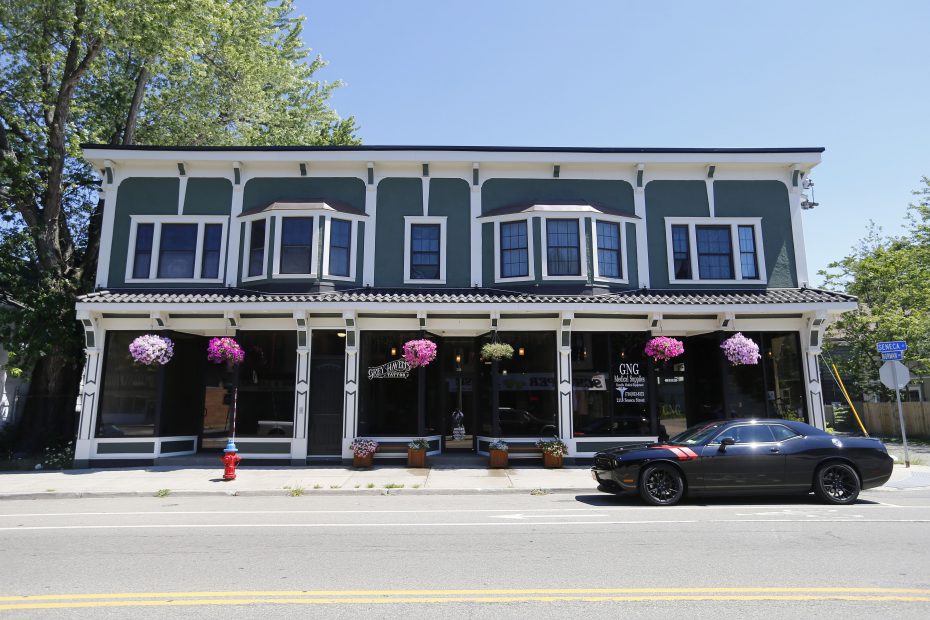 This recently renovated building by Hook and Ladder Development on Seneca Street has three residential units on the second floor and room for three businesses on the first. (Mark Mulville/Buffalo News)

And it's getting ready to tackle a larger redevelopment of the former St. John’s Evangelist Church at 2315 Seneca, which it purchased for $175,000 but plans to renovate into four commercial units and 12 loft apartments, at a cost of $1.5 million to $2 million. Hook & Ladder brought in RP Oak Hill Building Co. to manage the construction that will start in the fall.

The three firefighters of Hook & Ladder have also developed ties with Howard and Leslie Zemsky's Larkin Development Group, which has led the charge in Larkinville, less than two miles away up Seneca.

"At the end of the day, there's a big picture," Scarcello said, referring to the need to connect the city's commercial districts. "There's something greater going on here than just restoring old buildings."

Meanwhile, Frizlen also met Mark Pasquale, a local investor who had been purchasing and renovating singles, doubles and even four-unit houses in the area. Pasquale had started a Facebook page to promote South Buffalo, and had several thousand followers.

That soon evolved into a broader community effort to form a nonprofit organization called the Coalition for a Vibrant Seneca Street, which is now pursuing potential government funding for its initiatives. The new organization, which doesn't yet have formal nonprofit status, already worked with the Wellness Center to obtain a $300,000 grant from the Better Buffalo Fund, to award money for facade improvements in a six-block area.

The group has even dug up prior studies of how to revive the district, using roundabouts and narrower streets to calm the traffic while still keeping it moving and enabling better pedestrian access – similar to what the Village of Hamburg has done. And they're taking their proposals to the city.

"I think with South Buffalo there is a better chemistry in place with private developers who are willing to risk their money and a very willing public sector," Frizlen said. Still, "we're just starting. This is the very beginning."