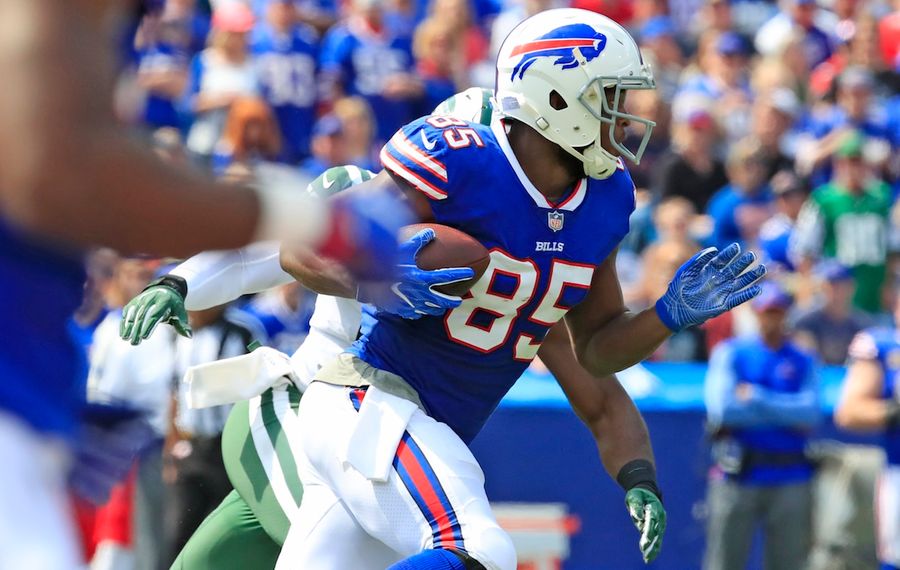 A lot of questions this week, so no room for an introduction.

Jeff F. asks: Which under-the-radar player is your early guess for the surprise of camp?

Jay: Rookie undrafted receiver Robert Foster. The Alabama product played last year for new Bills offensive coordinator Brian Daboll with the Crimson Tide. He has the size and speed NFL teams covet at the position – 6-foot-2 and 196 pounds. He plays a position that is crying out for someone to step up and earn a job. Honorable mention goes to his Alabama teammate, Levi Wallace. That’s partly because I love his story of going from a walk-on to a starter in what is always a loaded Alabama secondary. There aren’t as many jobs up for grabs at cornerback, though, so Foster gets the edge.

Andrew Kuczkowski asks: What should fans look for when attending practices in Rochester next week?

Jay: *Drum roll, please* … LeSean McCoy! Seriously, though, the status of the team’s star running back will be the dominant storyline at the start of training camp. That situation figures to hang over the team until there is some resolution.

After that, the obvious focus will be on the quarterbacks. Having an open competition for the starting job always makes for an exciting camp. How much work does rookie Josh Allen get with the first team? How are A.J. McCarron and Nathan Peterman splitting reps? All of those will be a daily focus for media covering the team.

If you really want to get serious, the competition between Russell Bodine and Ryan Groy for the starting center job should be close, although I’d caution that evaluating offensive line play is hard in general and even more difficult when the players aren’t in pads. I’ve always felt it takes a defending player who is trying to sack the starting quarterback before an offensive lineman’s performance can truly be judged.

Jay: Elliott all the way! An explanation for those who don’t know me: My 4-year-old son has loved golf since he was a baby. He watches it with me every weekend. I’ve taken him out this summer and I make a course for him that measures 1,110 or so yards (the standard U.S. Kids Golf tournament distance for 5- and 6-year-olds). One of the last times out, he shot 46. No gimmes, no mulligans. His average drive is about 80 yards, and he’s hit a few more than 100. OK, enough about that.

To Bob’s question, I’d take Elliott or any other 4-year-old on this question because I don’t believe that Allen will start in Week 1. He barely took any reps with the starters during the spring. Perhaps that changes when camp gets going, but he has a long way to go before moving ahead of either McCarron or Peterman on the depth chart.

Jay: The reason the NFL limits game-day rosters to 46 players is competitive balance. Even though teams carry 53 players on their active roster, it’s rare that all of them are healthy enough to play. By making seven players inactive, it basically guarantees that both teams will have the same number of healthy players.

That being said, I do think the league will one day soon eliminate the inactive list. The players are receiving their full game check either way, so they should be eligible to play. Having more players available would make the game safer, because an injured player wouldn’t have to risk making things worse by staying in the game.

If competitive imbalance is something the league fears, an easy solution would be to make players on the practice squad eligible to be called up on an “emergency” basis – similar to how NHL teams use their farm clubs. There might be some salary-cap implications to doing that, but it seems like an issue that the two sides should easily be able to find common ground on. Of course, when it comes to the league and the players’ association, it’s dangerous to ever assume that.

Rick asks: Don’t get why everyone is down on the Bills. You replaced the 31st passing offense – how much worse can they get? You upgraded the defense. Eric Wood will be missed, but Richie Incognito was a year away from being replaced anyway. Tough early schedule. Better talent than last year.

Jay: This was not in the form of a question, Rick, but let’s go through some of these points. I agree it’s conceivable the passing offense does improve, but that has to be balanced against the reasonable expectation the running game’s production will drop without the scrambling ability of Tyrod Taylor – and the uncertainty surrounding McCoy’s status.

The defense should be better, but will they be able to produce as many turnovers? Those are tough to predict year over year. I agree that Incognito was heading into what was likely his final year, but having to replace him now is still going to be a challenge. He made the Pro Bowl the last years.

The schedule is difficult at the start, with three of the first four games on the road, and then features a Week 16 trip to New England. If you’re thinking playoff push, that’s a tough time for what most people accept is going to be a loss.

It’s fair to say the talent has been upgraded on defense, but that’s a stretch on offense, which has to replace Wood and Incognito and has very little proven depth at wide receiver.

Sanjay Kapur asks: Are you more or less optimistic heading into camp vs. same time last year when everyone thought they were tanking?

Jay: I’ll start by saying I never thought they were tanking. Trading away Sammy Watkins and Ronald Darby would have been tanking … if the Bills didn’t get Jordan Matthews and E.J. Gaines back in the deals? Sure, the draft picks acquired were probably more important to General Manager Brandon Beane, but those deals weren’t throwing in the towel on the 2017 season.

That said, I’d say I’m slightly less optimistic this year. As laid out above, I have serious questions about whether this offense can score enough points. Now, the easiest way for that to change and me to be wrong is if one of the quarterbacks exceeds expectations. I’m not ruling out that possibility, I just wouldn’t predict it.

Bradley Gelber asks: How do you expect Kelvin Benjamin to be utilized in Brian Daboll’s offense? Is it contingent upon which quarterback wins the job?

Jay: Mostly because they don’t have much else, Benjamin figures to be the No. 1 target among receivers – provided he can stay healthy. I’d expect him to be used plenty on slant routes, and frequently be the top option in the red zone, where he can use his 6-foot-5 height on jump balls. Can he stay healthy? That’s the great unknown. He did look fit in spring practices, which was a good sign.

I don’t expect the quarterback decision to greatly alter Benjamin’s work load. It’s not like he’s going to stretch the field, which might lead to more deep balls from the big-armed Allen. Instead, Benjamin will work the shorter and intermediate routes, which all three quarterbacks will make most of the time. It’s a contract year for Benjamin, so both sides would benefit from him becoming a bona fide No. 1.

“JWS77” asks: The national media doesn’t “Billieve.” Do you “trust the process” or are you looking for a setback this season?

Jay: I’m not predicting the Bills to be a playoff team, so in that sense I’m expecting a setback. However, I can see the vision for this team that Beane and coach Sean McDermott have. Obviously, Allen will play a huge part in whether that vision proves to be successful. With the amount of salary-cap space and the draft capital the Bills will have next offseason, I feel like they’re a year away from what should be playoff contention.

James J.L. Rizzone asks: Should fans be worried that Allen hasn’t signed yet? Who is your sleeper as camp MVP?

Jay: It’s a bit weird that Allen hasn’t signed yet. It would not be a good look for him or the team if they’re unable to get a contract done and have him in camp ready to go on Day One. In fact, it would be unacceptable. If Allen wants any chance at the starting job, he needs to be there at the very beginning. The longer this drags on, the worse it looks for both sides. So, yes, I think it’s fair if fans have some level of concern.

As for camp MVP, I’ll go with Charles Clay. There were three years of stories about how Tyrod Taylor didn’t properly utilize the middle of the field (even if the topic was overblown). That’s not out the window. Clay needs to be a big part of the passing game in 2018, and should get every opportunity to do that.

“Wandering Jack” asks: Curious about a guy no one has talked about on the offensive line, Conor McDermott. Does he factor in at the weak right tackle position?

Jay: Absolutely he does. McDermott was claimed off waivers from New England shortly before the start of the 2017 season but appeared in just three games, spending most of the season as a healthy inactive. The coaching staff thought enough of him, though, to keep him on the 53-man roster the entire year. That wouldn’t have happened if they didn’t think he had a chance to be a contributor. I wouldn’t say McDermott is the favorite for a starting job, but there will be one or two tackles kept behind starters Dion Dawkins and Jordan Mills. The third job, in particular, is important, since that player is active as the top backup at the position every week. It would be a step forward for McDermott if he was able to claim that role.

“We will outlive you” asks: Would it have been better for the country to let Trump buy the Bills if it meant he wouldn’t be president?

Thanks for all the questions this week!