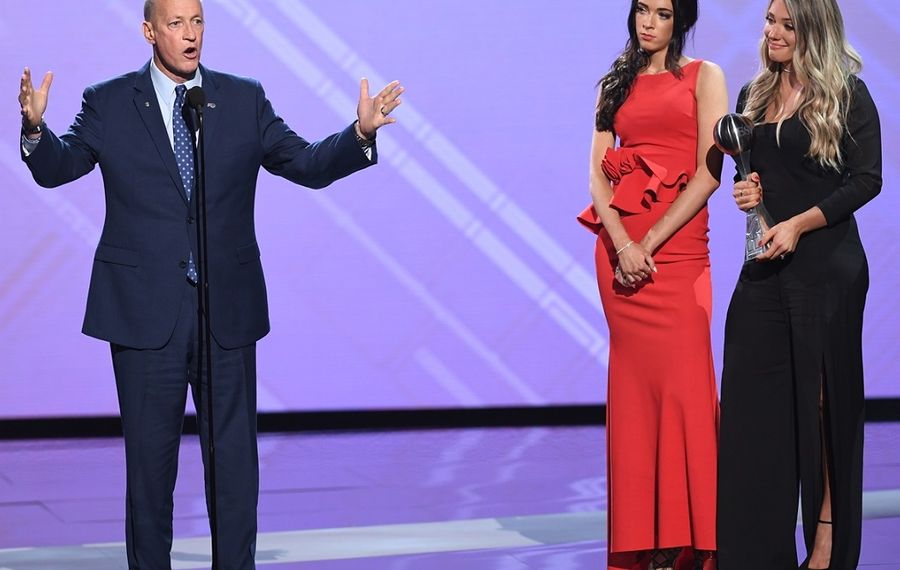 Yes, there were some dry eyes in the audience during Jim Kelly's speech at the 2018 ESPYs  in Los Angeles. But there weren't many. The show's director wisely flashed to audience reaction shots while Kelly was speaking.

Eyes were wet all over. Expressions were stricken with empathetic sorrow over a man whose son lived for eight years with a rare and terrible disease that prevented him from speaking a word; a man who has survived three bouts with jaw cancer, the most recent in March with 12 hours of surgery.

These were people in the audience who were, by no means, easy marks for showbiz manipulation. These were people who know how the tricks are done but, more importantly, know when no tricks at all are involved. I'm talking about the faces of Oscar-winner Allison Janney, Jon Stewart and Philadelphia Eagles quarterback Nick Foles. I'm talking about Kelly's friends John Elway and Dan Marino standing onstage with him.

These were adults who couldn't help but marvel at the determination of a man dealt so many staggering blows by life. What you see on Kelly's fight to deliver his speech online is, in fact, less than half of what had such a wallop on TV.

When Kelly began his five-minute speech, the audience had already been rocked for several minutes of ESPN's expertise in documentary television telling you the stories behind exploits in stadiums and arenas.

Kelly began by choking up and admitting he still has trouble watching footage of his son, Hunter, who died of Krabbe's disease. He admitted he used to dream of having a son who would play his sport and even wear his number 12. Such frankness and vulnerability were already shattering. At that point, any Buffalonian watching without tears was already giving evidence of being a quart low in humanity.

He finished by exhorting everyone in the audience to "make a difference" in the lives of those who are suffering, whatever the reason.

So there we were watching the ESPYs, supposedly dedicated to rewarding great athletic endeavors. And Jim Kelly, through ESPN, was essentially telling the world that sports are all well and good but what could it matter next to two grown daughters who never fail to greet their father with smiles and good cheer no matter how many hospital rooms his jaw cancer had thrown him into.

In a way, all the participants at the ESPYs have an advantage over the pampered showbiz narcissists at the Oscars, Emmys and, especially, Grammys who are being rewarded for reasons that are usually far from pure.

Athletes spend their working lives listening to the exhortations of passionate people meant to inspire them. Especially when those athletes – quarterbacks, for instance – are meant to inspire others, these are people who are, to put it mildly, "in touch with their feelings." (And those of others, too.)

When Kelly was finished following up ESPN's already powerful film "package," I tweeted on Twitter that he'd finally won the Super Bowl. He'd given television as powerful a moment as any athlete ever has.

Little did I know that the ESPYs had far more in store for those of us at home. They proved in an extraordinary way to be infinitely more devoted to the dramas of life than those of sports.

The evening ended with 140 female gymnast survivors who had, over many decades, suffered sexual abuse by the same man, Dr. Larry Nassar, whose "treatment" of female athletes in this country continued though women spent years coming forward and telling those in charge something was very wrong.

What the women were doing was, ostensibly, being given the Arthur Ashe Award for Courage. But what they were really doing was presenting American TV watchers with a huge Sisterhood of Survivors who had finally stopped putting up with a sickening American ability to countenance abuse of power over women, especially when they're children.

We're in a very different world now. "Me too" has caused an immense reckoning. Hugely powerful film producers are going on trial; Olympic doctors will spend the rest of their lives in prison.

Somewhat incredibly, the 2018 ESPYs seem to have invented "woke" award show television for the 21st century.

It wasn't just that final sisterhood where Olympian Ally Raisman was breathtakingly harsh on how gymnastics had been perverted by success and money. It was, as well, another segment in tribute to the coaches at Marjory Stoneman Douglas High School who lost their lives saving students during a horrific school shooting.

And it was a Pat Tillman Award given to Team Rubicon CEO Jake Wood, a former jock and soldier who is now a first responder to disasters everywhere around the world.

We've spent so many years being inundated by award shows that are about egos and money and the folkways of showbiz promotion.

And now, incredibly, sports has given us an award show that wasn't about sports at all but rather the primacy of life itself, that thing we all have to deal with.

Where the rewards can be so very much richer.

And the losses are the most grievous that there ever are.