The blow was both economic and spiritual, a combination all too familiar to a weary community .

For many of us in Western New York, it is impossible to think of Dunkirk without seeing the smokestacks of the old power plant – operated for years by Niagara Mohawk – that dominate the city's waterfront. In the decades after World War II, the economic heyday of the little Chautauqua County city, that towering landmark was a source of enormous municipal tax revenue.

Once NRG Energy decided to shutter the coal-powered plant, it became a different kind of emblem. Yet that message temporarily turned around once again two years ago, when NRG proposed restarting the plant behind the use of natural gas.

That dream ended last week. NRG confirmed it was abandoning the plan.

I was born in Dunkirk, where the news hit "like a punch in the gut," in the words of state Sen. Catharine Young, R-Olean, a backer of repowering. It was enough to cause me to take a ride the other day to the Dunkirk Historical Museum, where city historian Diane Andrasik wanted to show me an artifact she saw as appropriate to the moment.

Andrasik had been thinking about a 19th century civic hero named Horatio Brooks. He was fiercely loyal to the city at its most difficult moments, she said. Directors of a hospital named in honor of Brooks and his wife, Julia, have also announced that after an extended search process, they intend to move the hospital from Dunkirk to nearby Pomfret – leaving Andrasik to hope it does not leave a void in the city.

As for me, the power plant shutdown felt both deeply personal – my father worked there for Niagara Mohawk, driving a crane on the coal pile – and all too emblematic of the struggles of the region: Even as Buffalo quietly revives, step by step, its satellite cities are still coping with such psychic body blows.

The plant remains a dominating feature along Lake Erie. Tuesday, Young spoke with regret of the NRG announcement. The entire region, she maintains, could benefit from that new power. And Dunkirk Mayor Willie Rosas said the plant, in full operation, would have provided about $3 million a year for the city in payments in lieu of taxes.

While Rosas said the shutdown had a lingering emotional impact, he refused to see it "as the end of the world." He emphasized there is still some unusually good economic news in Dunkirk, which is another reason I decided to take a ride. I wanted to see that good news with my own eyes, especially after Alain Kaloyeros – former president of SUNY Polytechnic Institute – was one of four men found guilty last week of bid-rigging linked to state contracts.

When I think of Kaloyeros, I think of the day in 2016 when he was front and center, with Gov. Andrew Cuomo and other state officials, in what amounted to a euphoric pep rally at Dunkirk High School. Everyone was on their feet and cheering about how Athenex, a biotech company that produces cancer-fighting therapies, was going to create hundreds of jobs in the community, how work on the site would be rolling by that spring.

It took a little longer to get everything in action. Nine months later, Kaloyeros was indicted on corruption charges unrelated to the Dunkirk project, and I worried the Athenex plan would somehow get caught in paralysis triggered by that scandal. Rosas, for his part, said he never lost faith in the goals of company officials. And the plan itself shifted into the control of Howard Zemsky, president and CEO of Empire State Development.

Even so, after a lifetime of watching big dreams in Dunkirk suddenly turn into vapor, it was good to hear these six words Tuesday from Teresa Bair, an Athenex vice president.

"The project is a complete go," she said.

Crews are already preparing land, near Route 5 in the Town of Dunkirk. She said the plant is scheduled to open in 2020 with 150 jobs, a number expected to reach 450 by 2025, while Athenex promises a total investment of $1.5 billion in the local economy within a decade.

The contrast between that project and the power plant shutdown stand in stark relief. Latest census estimates put Dunkirk's population at 11,848, down about 35 percent from when I was born. The city has a preposterously beautiful waterfront, juxtaposed against the grim aftermath of industrial flight, which disrupted thousands of lives and left behind too many families that suffer in poverty.

The most immediate challenge is a simple one: Once Athenex gets rolling, can the city convince many of those new employees to buy homes, raise their families and pay taxes in Dunkirk? Rosas and Rebecca Yanus, the city's planning director, spoke of the allure of Lake Erie, and said the question is already a priority – two years before Athenex opens its doors.

All those issues led me to the Dunkirk Historical Museum on Washington Avenue, where Andrasik, the city historian, was waiting with a 19th century leather booklet – a kind of combined notebook and wallet – wrapped carefully in plastic. 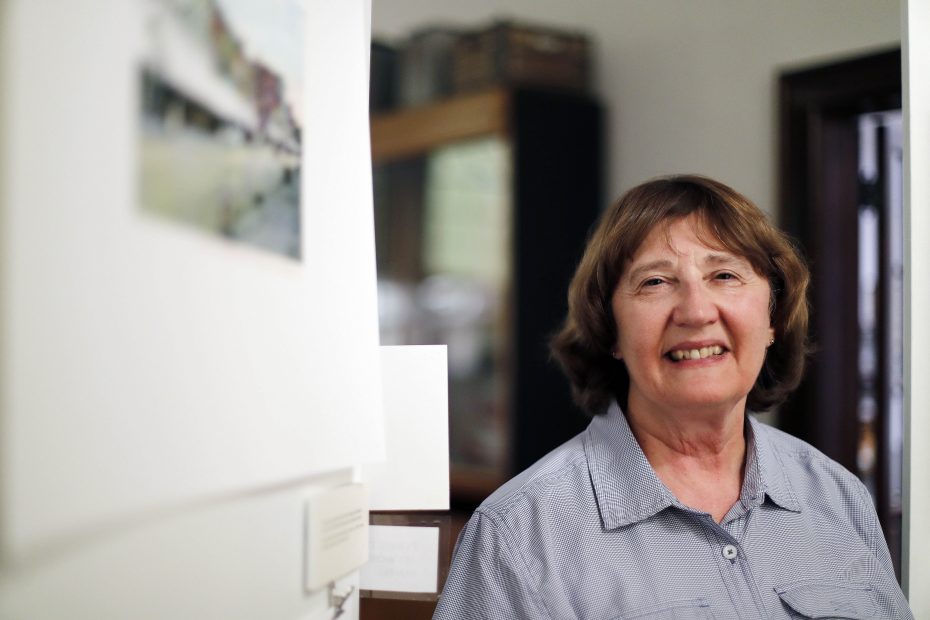 The booklet dates to 1875. It belonged to Horatio Brooks, the 19th century founder of the old Brooks Locomotive works. Andrasik noted how Brooks used a pencil to chronicle both his daily business and such intimate details as his concern about one of his daughters, Ella, who finally recovered after struggling for months with a "typhoid-like" disease.

Born in New Hampshire, Brooks was working by the time he was 16, Andrasik said. He ended up in Dunkirk as a superintendent for the Erie Railroad. When that company decided to shut down its operations – potentially cutting the heart out of a fragile community – Brooks gambled on opening his own locomotive works. He was not only the city's main employer, but served three terms as its mayor.

In the 1870s, a depression staggered the American economy. Brooks, with the support of his wife, Julia, nearly went broke buying groceries for employees when there was no work for them. "He could have sold the company and made a lot of money and left," Andrasik said. 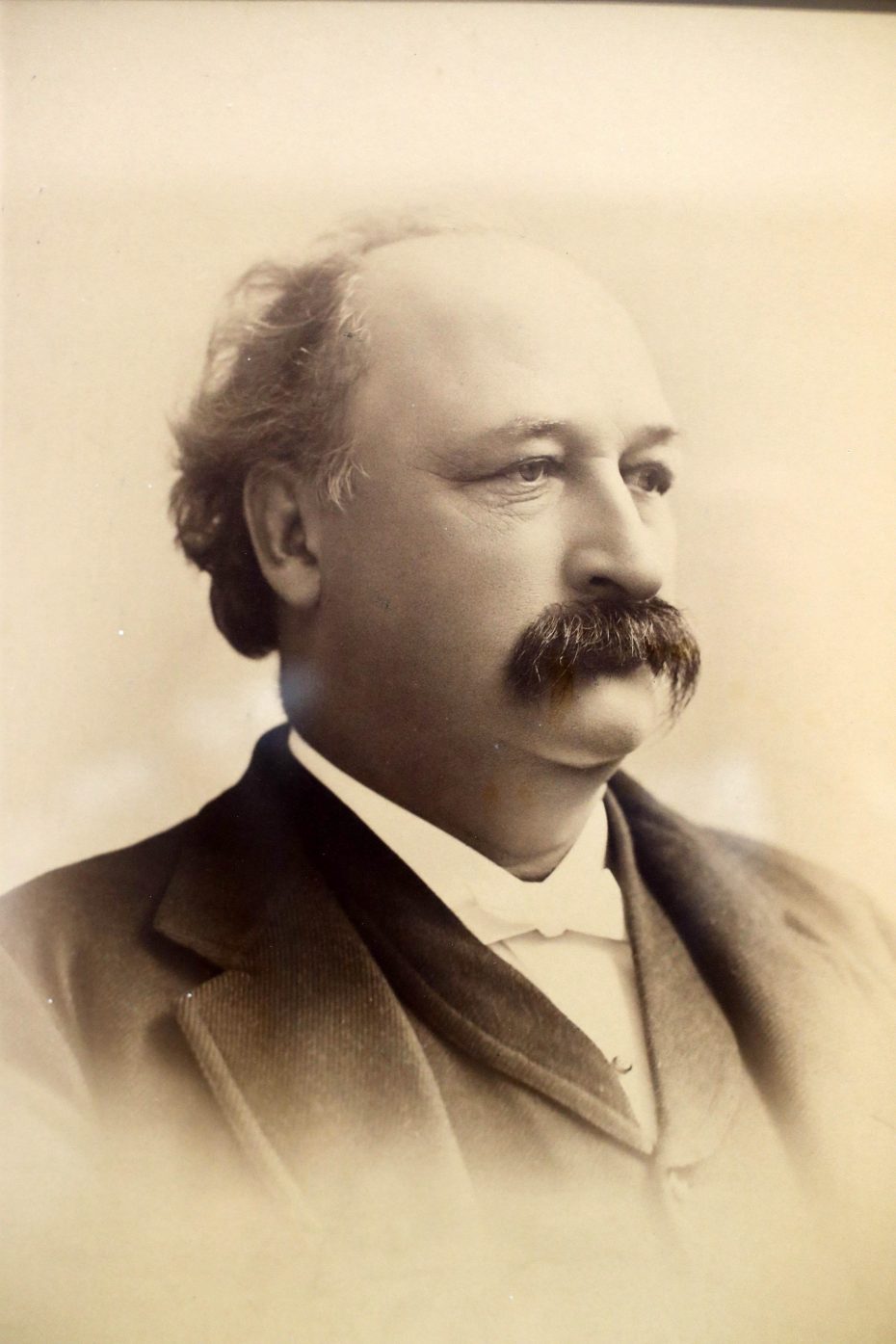 Instead, he remained loyal to his city in grim times. When he died too young, at 58, he was seen as a civic hero for one reason.

"He was committed," Andrasik said. "He believed in this community."

She spends many days in the museum, a place that by its nature commemorates the used-to-be: factories, breweries and storefronts that disappeared long ago. While she daydreams about the sweeping beauty of a wide-open Dunkirk lakefront, it is hard for her to wrap her arms around the idea of how you demolish and clean up a massive steam station if it is truly closed for good.

She also hopes a special reuse committee comes up with a vibrant purpose for the longtime site of Brooks Memorial Hospital – built on land in the heart of the city, and donated by a family that believed so powerfully in Dunkirk – once hospital directors follow through with plans to move that hospital to Pomfret.

All of it, to Andrasik, only amplifies the meaning of Athenex, a company whose success represents the potential "life blood" of the community.

Amid so much change, she sometimes pulls out the little notebook owned by Brooks. She reads the thoughts he jotted down on his hardest days, and she thinks his voice – or maybe even more so, his essential nature – needs to resonate in Dunkirk, beyond the walls of the museum.

"The thing about him," Andrasik said. "He never gave up hope."