Catholic Health next month expects to open a drug treatment center in Amherst that will distribute methadone, one year after opposition forced the system to scuttle its original plans.

Renovations have quietly moved forward in a nondescript West Amherst industrial park where clinic employees will provide daily methadone doses and other services to patients.

The office building on John Glenn Drive is about 5 miles from the site, on the edge of a residential neighborhood, where Catholic Health initially wanted to open the clinic.

"I'd like to think that they wanted to be good neighbors, and moving it was the right decision — for them as well as for us," said Lynda Hitchcock, a North Ivyhurst Road resident who spoke out against the initial site.

People on both sides of last year's controversy agreed that patients need easier access to treatment for their opioid addictions. But residents and some elected officials said Catholic Health picked the wrong location, on Millersport Highway in Eggertsville, and didn't do enough to explain their plans to the public.

Still, when the center opens in mid-August, system officials say they look forward to showing it will operate safely and without disruption to the community.

"This location allows us to really expand quicker, exhaust our waiting list, open up our doors for more patients," said Marty Boryszak, president and CEO of Sisters of Charity Hospital.

Sisters Hospital, part of the Catholic Health System, has operated an outpatient addiction treatment program in Amherst since 1988. The clinic at 3730 Sheridan Drive provides counseling and other services, but Sisters wanted to expand to offer medication-assisted treatment, such as methadone, to patients.

The system's initial desire to offer the new services at 3730 Sheridan was rebuffed by its landlord in spring 2016. That eventually led to 910 Millersport, off Sheridan Drive.

Catholic Health informed some town officials of its plans in 2016. But no public hearing or vote was required for the clinic, and system administrators had not met with neighbors through early 2017.

Word of the clinic didn't reach the public until a Town Board meeting in April 2017, when residents raised concerns about methadone distribution and the lack of information about the project.

People who live on North Ivyhurst, behind 910 Millersport, and elsewhere in that neighborhood said they feared the clinic would be a magnet for crime and drive down property values. Catholic Health insisted it had the right to open the clinic, and it belatedly tried to win over reluctant neighbors and town officials with the support of county health administrators.

But town and state officials objected, and a standoff dragged into late summer before Catholic Health selected an alternative site in the Audubon Industrial Park.

Sisters' treatment center will open at 210 John Glenn Drive, in a space where a health and wellness company planned to move in but never did.

Spokeswoman Carrie Sette-Camara said workers found inspirational messages throughout the building when they moved in to start renovations. Recently, a mantra printed above the main entrance, "Count Your Blessings," still was visible to people walking out.

Contractors are gutting and rebuilding the interior at a cost of about $600,000.

Security is a prime consideration for the center. The methadone is kept locked away in a safe and its distribution, in liquid form, is highly controlled, said Sheryl Brown, director of chemical dependency services for Sisters.

A guard will be on site and surveillance cameras will provide added security.

The majority will drive there, but the office park is along a bus route and that was important to Catholic Health, said John Sperrazza, Sisters' chief operating officer.

The clinic also is set up for counseling for drug and alcohol abuse, and Sisters plans to expand to offer primary care and other services.

Sisters operates one clinic that provides methadone, on Holden Street in Buffalo, and it has had few problems despite serving 930 patients a day there, officials said.

About 50 of the Holden Street patients live near the John Glenn Drive site. Sisters expects up to 250 or 300 patients to receive methadone at the clinic within six months of its opening, Boryszak said. Many are desperately waiting for treatment.

"People are literally dying on our waiting list," said Brown, noting how some have turned to street fentanyl without realizing the danger. 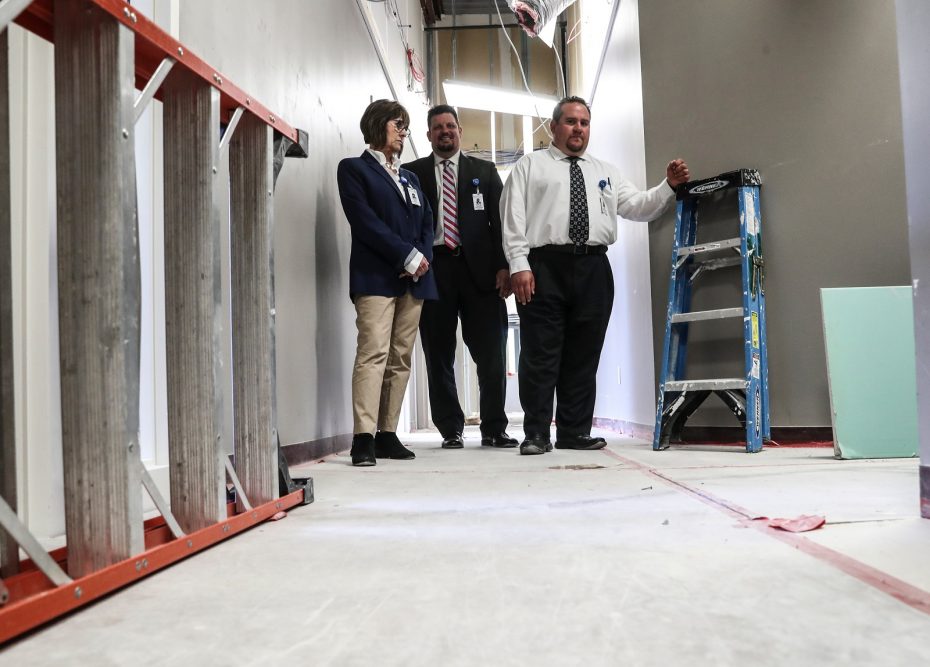 The Sisters treatment center space is in a building that has at least one other tenant, a medical-supply company. Nearby buildings on John Glenn and Commerce drives host IIMAK, Eaton Office Supply Co. and Brook and Whittle.

Sisters officials said they sent out letters to the clinic's neighbors explaining what will happen at the facility and why they believe it fits well in the office park. They also held two or three forums to collect public input, though few people showed up, Sperrazza said.

Susan Stamp of IIMAK – a maker of specialty printer ribbons, inks and other supplies for industrial and medical uses headquartered at 310 Commerce Drive – had mixed feelings about the clinic's presence.

"We know that our employees and families, some of them have struggled with opioid addiction. And the clinic is much needed in the suburbs. But I don't know what it will bring," said Stamp, the company's senior vice president of human resources.

Hitchcock conceded some of last year's opposition stemmed from "horror stories" neighbors heard in the community. But she said Catholic Health compounded the issue by not being transparent early on.

Amherst officials last year introduced a local law to limit where new drug clinics could open in the town. The law would bar them within a certain distance from residences, schools, playgrounds or libraries, but the Town Board never approved it.

Bucki in February introduced a resolution creating a chemical dependency task force that remains on the board's agenda under "unfinished business."

"I think it's an issue that still needs to be resolved," Bucki said.

Sisters Hospital officials envision opening more clinics, to bring methadone and other badly needed treatment closer to where their patients live. But first they have to get the John Glenn Drive clinic off the ground.

"It's been a long year. It's been a long road," Boryszak said inside the unfinished space. "I think the end justifies the means. And, again, I think overall this is the best for everybody – especially, I'd say, the patients."