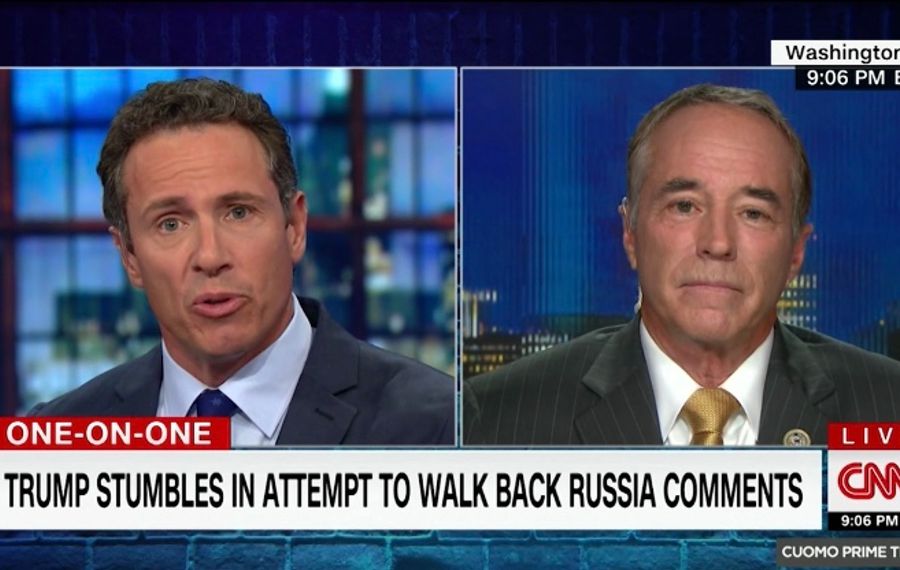 WASHINGTON – Reps. Chris Collins and Tom Reed doubled down on their backing for President Trump Tuesday, sitting down for combative national television interviews at a time when Democrats – including their fall opponents – and commentators continued to eviscerate Trump for his friendly summit with Russian strongman Vladimir Putin.

Collins' nighttime conversation with Chris Cuomo of CNN, as well as Reed's earlier talk with MSNBC's Katy Tur, both sounded more like debates than interviews, with the lawmakers appearing flustered at times amid especially aggressive questioning.

Both Collins and Reed agreed, though, that Trump did the right thing in meeting with Putin and that the president's motives were pure.

Those comments came a day after the president, at a news conference with Putin, appeared to contradict the American intelligence agencies that concluded long ago that Russia meddled in the 2016 presidential election to benefit Trump, the Republican candidate.

"I don't see any reason why it would be" Russia's goal to interfere in the American democratic process," Trump said at that news conference.

Trump tried to clarify those comments Tuesday by saying that he meant to say "wouldn't" rather than "would."

Under pressure from Cuomo, Collins agreed that the president misspoke. But Cuomo then played the video clip of Trump's clarifying statement, in which the president said the foreign hacking of the 2016 presidential election "could be other people also" as well as Russia.

Collins defended that comment, too, saying: "We are being hacked hundreds of thousands if not millions of times a day, people probing from any countries, whether it's Iran, North Korea."

An incredulous Cuomo then said: "This is who attacked us during the election. The answer is Russia, not or somebody else."

Collins and Cuomo later sparred over former CIA director John Brennan's statement that Trump's comments after the summit were "treasonous."

Collins criticized that comment, saying: "A lot of it has to do with the news media. When I watch folks use terms like 'treason,' oh, my God, Chris."

"Well, because it's being reported now and pushed like this guy's got some level of credibility," Collins replied.

Things were equally contentious over on MSNBC. Hours after telling reporters on his weekly conference call that he didn't see Trump's actions as treasonous, Reed told Tur that he accepts Trump's acknowledgement that he misspoke after the summit with Putin.

“I think the president made clear again today what he has said four times previously," Reed, a Republican from Corning, told Tur. "He recognizes that there is meddling by the Russians in the 2016 election. But no evidence of collusion."

Asked "What does Vladimir Putin have on President Trump?" and whether Congress ought to subpoena Trump's tax returns to see if there are any Russian connections, Reed demurred.

"The issue of this question is that red herring, its something that I think that is more motivated on the media and the hysteria," Reed said.

To which Tur injected, twice: "How is it a red herring to see where his money is?"

"The president has made the decision," Reed replied. "He's won the election the way that it's been handled. We need to move forward. And we understand that there's financial disclosures on record that people can have access to. And that, to me, we need to move from beyond that question and move it to the issues that face us day to day as American society."

By opting to go on national television, Collins and Reed took a more aggressive approach to defending Trump than many other GOP lawmakers, and they did it at a time when their campaign opponents were eviscerating Trump for his performance with Putin.

Nate McMurray, the Grand Island town supervisor and the Democrat challenging Collins in the fall, issued a statement saying that Trump's actions were a threat to Western democracy.

"This is one of the most despicable moments in our history," McMurray said. "The president of the United States has publicly chosen to side with a foreign government over the work of the men and women of our intelligence agencies."

Noting that he grew up during the era of President Ronald Reagan, McMurray said Trump is a different president entirely.

"We have seen nothing but weakness from this president," McMurray said.

Reed's Democratic opponent, Yates County lawyer and cybersecurity expert Tracy Mitrano, was no less sparing in her criticism of the president.

Mitrano offered no immediate comment on Reed's MSNBC appearance, but McMurray took to Twitter to offer a scathing review of Collins' interview on CNN.

"How does THIS man represent us?" McMurray asked. "I take my complaints about his constant presence on CNN back. Put him on every night. It’s like free negative advertising, and free – the only type advertising we can afford."