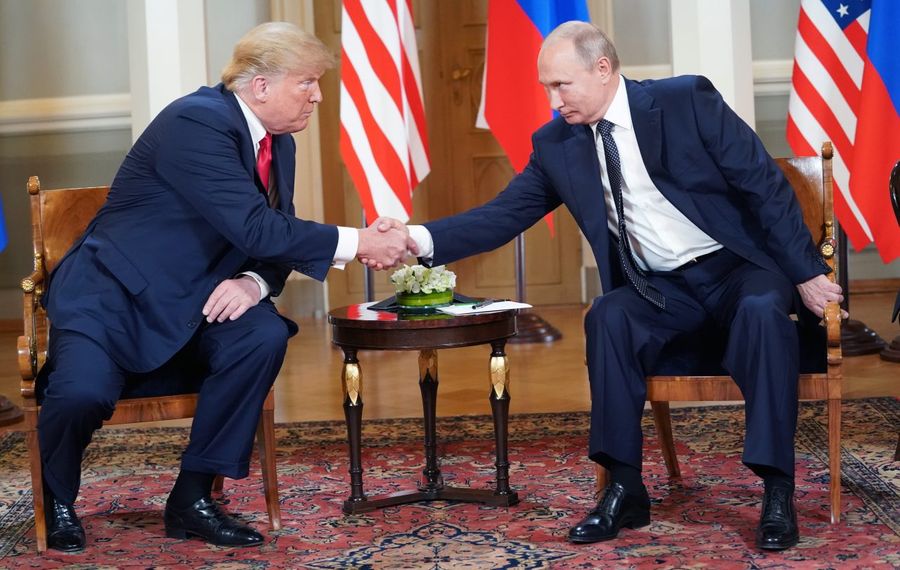 And that sentence rings true even if you love Donald Trump and believe every word he says and if history proves you were right to believe in him.

Those are the only logical conclusions stemming from Trump’s illogical "summit” with Russian strongman Vladimir Putin, where the American president gave equal weight to the word of American intelligence agencies and a murderous tyrant.

U.S. intelligence agencies unanimously agree that Russia meddled in the 2016 American presidential election to help put Trump in the White House, and Putin denies it.

And rather than choosing sides, Trump sort of took both sides while really backing Putin, saying, at a joint news conference,  "I don't see any reason why it would be" Russia's goal to interfere in the American democratic process.

There was more, much more. Most notably, Trump said both the U.S. and Russia are to blame for the problems between the two countries, and that special counsel Robert Mueller's investigation of Russian election interference "is a disaster for our country."

All of this gobsmacked pretty much everybody who heard it. In response, Trump's director of national intelligence, former Republican Sen. Dan Coats, contradicted him. Sen. John McCain, a former Republican presidential nominee, called Trump's performance "disgraceful." A former CIA director called Trump "treasonous." And even Newt Gingrich, a Trump acolyte if ever there was one, called Trump's comments "the most serious mistake of his presidency."

But why do Trump's comments prove that American democracy is under dire threat?

Because one of three things must be true. Either Trump is Putin's lapdog, or Trump is an incompetent who disdains democracy, or there really is a "deep state" out to destroy Trump's presidency.

Here's a closer look at those three ugly possibilities:

Trump, the lapdog. This has been the unspoken fear underlying the Mueller investigation, a possibility so terrible that you mostly heard it mentioned on the far-left fringe.

But by pandering to Putin, Trump made the preposterous seem possible, and maybe even likely. Proof came from the most mainstream of Democrats, Senate Minority Leader Charles E. Schumer of New York.

In the wake of the summit, "millions of Americans will continue to wonder if the only possible explanation for this dangerous behavior is the possibility that President Putin holds damaging information over President Trump," Schumer said.

Think about it. This is a U.S. president who has called the Canadian prime minister a liar, who has disrupted British domestic politics, who has worked to upend the alliance that has kept the West peaceful since World War II – and that's just this summer.

All of those moves weaken American allies while strengthening Putin's hand.

So is it any wonder that some people think that what a former British spy alleged in 2016 might be true – that Putin might be blackmailing Trump?

Trump, the incompetent. Of course, the idea that a Russian dictator had the goods on an American president, and used those goods to get his way, still seems somewhat far-fetched.

Some signs point in that direction. Most notably, in kissing Putin's ring, Trump is dissing his own advisers, who urged a much more cautious approach to the Russian leader. So if there's a pro-Putin conspiracy in the White House, it seems to be a conspiracy of one.

Besides, this is by no means the first time that Trump has been, well, less than graceful in the fine art of leadership. His first travel ban ended in disaster. His now-abandoned policy of separating immigrant families at the Southern border is an evolving disaster. And his continuing insistence that the free press is "the enemy of the people" shows that he hasn't thought very much about the oath of office where he vowed to "preserve, protect and defend the Constitution of the United States" – which includes the First Amendment right to a free press.

Trump, the victim. For a minute, though, let's consider the possibility that Trump is right to try to rebuild relations with Putin. Let's presume for a moment that the probe of Russian interference in the election is a "witch hunt." Let's presume there was "no collusion" between the 2016 Trump campaign and the Russian regime.

In that case, perhaps Trump's supporters are right. Perhaps a "deep state" of unelected government professionals is out to destroy the Trump presidency. And if that is the case, American democracy is under every bit as much of a threat as it would be if Trump is Putin's tool or if Trump is just a fool.

For years, the deep state seemed to be the creation of conspiracy theorists, but Trump has made the term mainstream, throwing it around as a possible explanation for all this fuss about election meddling. And while the term utterly infuriates FBI agents and others who put their lives on the line to protect the American people, it's become code on the right for what they see as an out-of-control bureaucracy – which would, come to think of it, be pretty dangerous for democracy.

There you have it: three ugly possibilities, every one of which could destroy the democracy we were raised to revere.

This is where we are. So what's the average citizen to do?

Pay attention. Don't tune out, not now. More on this tomorrow, but now is one of those times when our duty as a citizen is to watch what's happening in Washington and think clearly about it and act accordingly, for one paramount reason.

Your country, and the country your children will live in, is at stake.

Today we offer five different takes on the Trump-Putin summit: At the Atlantic, James Fallows says the meeting is a moment of truth for Republicans ... Meantime, Thomas Friedman of the New York Times argues that it's Trump and Putin versus the U.S. ... On the right, Rich Lowry of the National Review argues that Trump undercut the country he leads ... And the Trump-loving Daily Caller says Trump haters are losing their minds over the summit ... Meantime, the Washington Post says Fox News' Chris Wallace grilled Putin when Trump wouldn't.