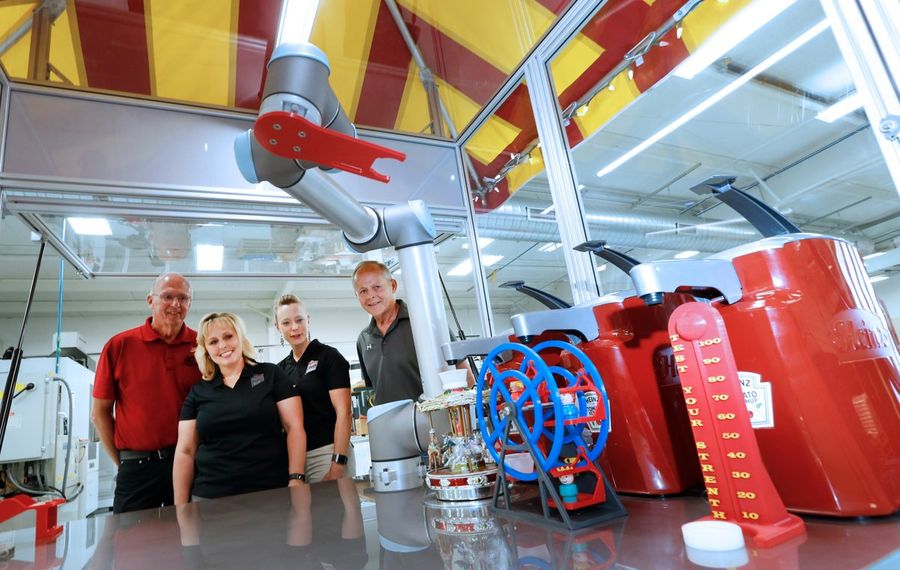 Ladies and gentlemen, boys and girls, prepare to stand spellbound with amazement at this year's Erie County Fair.

Because a robot will be fetching your ketchup.

"Molly the Ketchup Robot" is making its debut at this year's fair, a result of some only-in-Western-New-York synergy.

The robot was created at Hamburg's Staub Precision Machine by a team that includes brothers Tony and James Staub.

James Staub is the "Jim" in the "Jim's Fries" stand at the Erie County Fair, where he and his french fries have been a midway staple for 25 years. The Staubs had toyed with the idea of building a robot over the years, but finally decided to do it to help kick off the 2018 debut of the "I-Hub at the Fair," which will highlight science, engineering and technology with exhibits by local companies.

"When somebody says, 'We're thinking about building a ketchup robot,' you never know quite what is going to come out of it," Erie County Fair CEO Jessica Underberg said after the robot was unveiled at Staub Precision's Grimsby Drive location. "Tony and Jim have done an excellent job. Everyone keeps saying kids are going to love it, I think adults are going to love it just the same. It's amazing."

When fairgoers step right up to "Jim's Fries," they'll see the robot stand right next door.

As carnival music plays from a speaker hidden beneath a red-and-yellow canopy that will fit right in on the midway, Molly's robot arm picks up a small plastic cup and places it down on one of three carnival-themed holders — a test-your-strength hammer game, ferris wheel or merry-go-round.

Then the robot arm hits the dispenser pump a couple of times (just like you would), to pump the ketchup into the cup. The robot then scoops up the cup, drops it off, and then gives it a nudge down a ramp, through a hole in the plastic window, ready for pickup.

"It feels like the fair, it feels like a carnival," said Tony Staub, who founded Staub Precision Machine. "We are ecstatic."

The Staubs and fellow designers Tony Mormina and Joe Pinker (president of the company) spent more than 300 hours on the project, but James Staub said "I think by the time we're done we'll have over 400 hours."

A few hours will be put toward the merry-go-round holder, which wasn't operating for Tuesday afternoon's media debut but was expected to be running by Wednesday.

Tony mentioned the idea of building a robot to Jim in recent years, but it didn't go over so well.

"Tony asked me, 'What if we design and build a robot that dispenses ketchup at the fair?" And I said, 'Tony, no way, we are way, way too busy at the fair. We have too much going on,' " Jim said.

And he does. Jim lives about 15 minutes away from the fairgrounds, but during the fair he stays in a camper to run his stand. He's up at 7 a.m. to change the oil every day in the fryer, and the earliest they usually shut down the stand is midnight. In 2015, one of Jim's specialties, fried pierogi, along with one of his son's, Jim Jr.'s deep-fried taco (at a separate "Jim's Tacos" stand), made a News list of outstanding food choices at the Erie County Fair.

The team started by cutting steel and building the frame. The project had several incarnations along the way. Originally, the idea was to have ketchup dispensed from underneath, but they were moved on top "because people want to see movement," Jim said.

The robot, which is referred to as a "cobot" or a collaborative robot because it is built with sensors which help it to work alongside humans, was originally set up in the middle of the stand, but was moved to the corner so it would be able to reach all of the dispensers.

Mormina designed the ferris wheel, in which all of the parts were 3D-printed in-house at the Staub facility. Polycarbonate plastic windows were added, with the ability to swing them open. A door was built into the back so the ketchup could be reloaded. Tony Staub built the drawers to load the cups.

The slides where the cups come out had to be perfected with some trial-and-error — at first cups were sliding on to the floor — but the right angles were found on the curved slides. The team also added crossbars on the slides to make them childproof.

(The story behind the name of the robot is not quite as interesting: The team was originally seeking an alliterative name to pair with the 'R' in robot; that led them to "Rollie," but there were concerns about the pronunciation, so then they shifted to "Molly.")

The steps in the manufacturing process reflect what the fair is trying to do with the I-Hub exhibits. The I represents "innovation, imagination and ingenuity." Fairgoers will be able to fly a virtual drone, drive robots, work with pulleys, levers and gears among other activities.

"One of the things we did last year in the fall, was taking a look at everything we do, why do we do it … and what pieces are we missing," Underberg said. "We as a staff thought the technology part was missing — and technology is how fairs started.

"There's a huge emphasis on (science, technology, engineering and math) ... in schools and clubs, and we wanted to be a part of that, and to help showcase the Western New York manufacturing jobs and businesses that are right here in our backyard."