Samuel Mascorella looked like anyone else in the crowd when he climbed off the train. This was 98 years ago, after he arrived in Syracuse for the dedication of a World War I monument that may have as much intimate meaning as any memorial to that war in this nation.

The Rev. J.J. Ganey, a Catholic chaplain who served alongside Mascorella, peppered him with gentle but insistent questions, according to newspaper reports of the time: Why had he chosen not to wear all his medals? Would he "come through" and be willing to show them to his friends, the priest asked, these fellow witnesses to a battle that equated to utter horror?

"I didn't do much," said Mascorella, before he pulled them out.

Barely 21, Mascorella was the child of Italian immigrants, a guy shaped and raised in Western New York. He had the medals in a coat pocket, and he was in Syracuse for a ceremony to honor more than 1,000 men killed or wounded within the 38th Regiment alone during the Second Battle of the Marne.

Fought 100 years ago this weekend, it was the beginning of the end of World War I, a battle – won at a high cost – of such meaning that it set the stage for events leading to the western world as we know it today.

It was decided by the exploits of soldiers like Mascorella, a private who volunteered to carry a critical dispatch when those who tried the same task before him were quickly killed.

There will be a ceremony at noon Sunday in Syracuse to recall that battle and its lasting magnitude. "It was absolutely the pivotal moment of the war," said Stephen L. Harris, an author and historian who wrote "Rock of the Marne," a book about the sacrifice of Mascorella's 38th Regiment and the Third Division.

According to documents used in the creation of "Buffalo Never Fails," an exhibit at the downtown Central Library that recalls civic sacrifice during World War I, nearly 19,000 soldiers, sailors and Marines from Erie County served in the war, and almost 1,000 never made it home.

The young and untested Americans who held their position in 1918 at a French river called the Marne - the soldiers who drove back the onslaught of German forces desperately attempting one last surge - soon earned a place in legend.

After the war, grieving, their original numbers decimated, survivors in the 38th came up with the idea for the monument in Syracuse, then paid for it in great part with a collection beginning with their own wallets – behind the belief that the sacrifice of their friends should never be forgotten.

Mascorella, whose name you probably never heard, is proof of a truth that seems to play out many times:

So many great stories, in some fashion, thread their way to Buffalo. 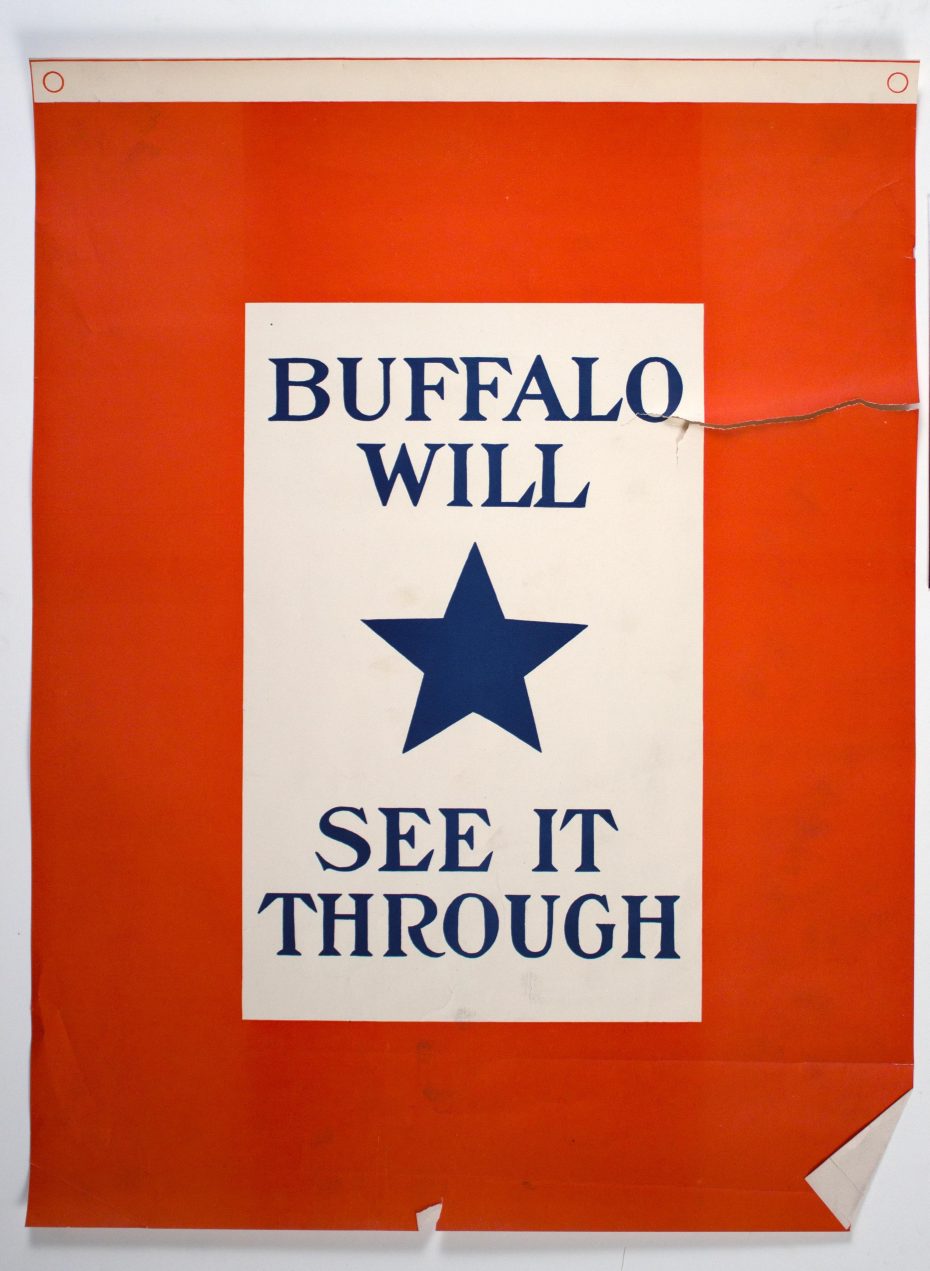 Mascorella was raised in Western New York. Most of his birth records say he was born in Buffalo. Old city directories indicate his father, an immigrant laborer, was living here in the early 1900s.

A marriage certificate, discovered by skilled researcher and genealogist Megan Smolenyak, documents Mascorella's 1916 wedding in Silver Creek to Grace Guarino, a native of Dunkirk, whose parents were also newcomers from Italy.

At that time, Mascorella was not yet 17 – even though his age on the certificate was listed as 18.

A year or so later, when he enlisted, he and Grace were living in Erie, Pa.

When Mascorella died in California, in 1960, after 27 years as a guard with prisoner work details, the selfless nature of his actions in the war led to his burial in Arlington National Cemetery.

Yet the ceremony in Syracuse, even after a century, is not intended to invoke ancient history. Instead, it is the renewal of a living promise. In 1917, when the United States entered World War I, the 38th regiment organized at the state fairgrounds.

"They were young guys, college students, maybe 21, 20, 19 years old," Harris said. They bonded in training and were sent to Europe. The Germans, understanding the American presence would tilt what had turned into one long and bloody stalemate, launched what Harris described as their fifth and decisive offensive.

The goal was seizing Paris. Claim that city, and there was a chance for the Germans to win the war, Harris said, rather than succumbing to Allied terms.

To get there meant a savage battle at the Marne. The French, defenses staggered, asked for American help. Gen. "Black Jack" Pershing, commander of the American Expeditionary Force on the Western Front, sent his second and third divisions. He would later call the stand at the Marne "one of the most brilliant pages of our military annals."

At the center was the young 38th regiment, "with no combat experience whatsoever," Harris said. Before the battle, American soldiers laid down underground telephone lines to try and stay in touch with their command. An artillery barrage quickly blew those lines to bits.

It is hard to grasp, Harris said, what the 38th endured. A French division on their flank was decimated. They were attacked on three sides by artillery, withering machine gun fire and assaults with poison gas. Men went mad from the sheer horror of what happened to soldiers standing at their side, Harris said.

With the telephone lines cut, human messengers – known as runners – took on long shot, almost suicidal missions. Mascorella was stationed at headquarters. Harris said that meant delivering messages for Col. Ulysses Grant McAlexander, one of the legends of the war.

The two runners who accepted the job before Mascorella died in their attempts to get to the troops and back.

At 18, Mascorella volunteered to go.

"It was horrible," Harris said. "He would have been running through the gas, the artillery, the machine gun fire."

Mascorella made it. The achievement took on such unforgettable status that he received the Distinguished Service Cross, second only to the Medal of Honor amid American medals for valor and selflessness. The French awarded him the Croix de Guerre, a medal for distinguished bravery in combat.

As for his regiment, about one-third of its 3,600 men were listed as casualties. Those who survived could not forget the lost. From their own pockets, they took up a collection to build a monument. They commissioned Roland Hinton Perry, a sculptor who did memorable work at Gettysburg, to create a statue of a soldier with a gas mask around his neck, a rifle in his hands and his foot on a stone.

They called it "The Rock of the Marne," the same name by which the Third Division is known today. They considered placing it at Arlington, then thought about the camp where they grew close.

The memorial was dedicated on July 15, 1920, in Syracuse, in the presence of a crowd of about 25,000, a crowd so thick the veterans had trouble shouldering their way to the ceremony.

"We of Syracuse accept this trust," Mayor Harry Farmer told the men who served with the 38th. "We shall never be forgetful of the honor it confers upon us. We will cherish it and guard it as we would the graves of the heroic men whose names make up a magnificent roll of surpassing honor."

That area, Farmer said, would always be "a sacred spot."

In the way life too often goes, the promise was forgotten, the park hardly regarded as sacred. For years, one of the bronze panels – only recently rediscovered – vanished from the monument. A memorial to what historians call the turning point of the World War I, built upon the blood and grief of the survivors, lost the protection of that sense of civic purpose.

Sunday, a century after the battle, the promise will be renewed. Major Gen. Leopoldo Quintas, whose Third Infantry Division is still known as "The Rock of the Marne," will be the keynote speaker in a ceremony organized by the Onondaga Historical Association.

As for Mascorella, according to Smolenyak's research, he eventually moved to California, where a few of his exploits raised him toward local legend.

As a high-risk joke in 1930 on the Fourth of July, according to The Los Angeles Times, Mascorella told a friend he had to leave a party in a hurry, and then spontaneously jumped through a second -story window – burning himself on electric wires as he fell.

More than a decade later, The Times reported, he enlisted for a second time and served again during the Second World War.

Smolenyak's quest also led to a grandson, James Mascorella of Montana. A veteran of Vietnam, he said by telephone this week that while family stories always placed his grandfather's childhood as somewhere in New York, there was no family lore of the Distinguished Service Cross, or how Sam Mascorella gambled with his own life to save his friends.

Once Mascorella made it home, the guy who married his wife in Silver Creek chose to keep those stories, like his medals, in his pocket.

"As an American soldier, as a combat veteran," said his grandson, "he just makes me incredibly proud."