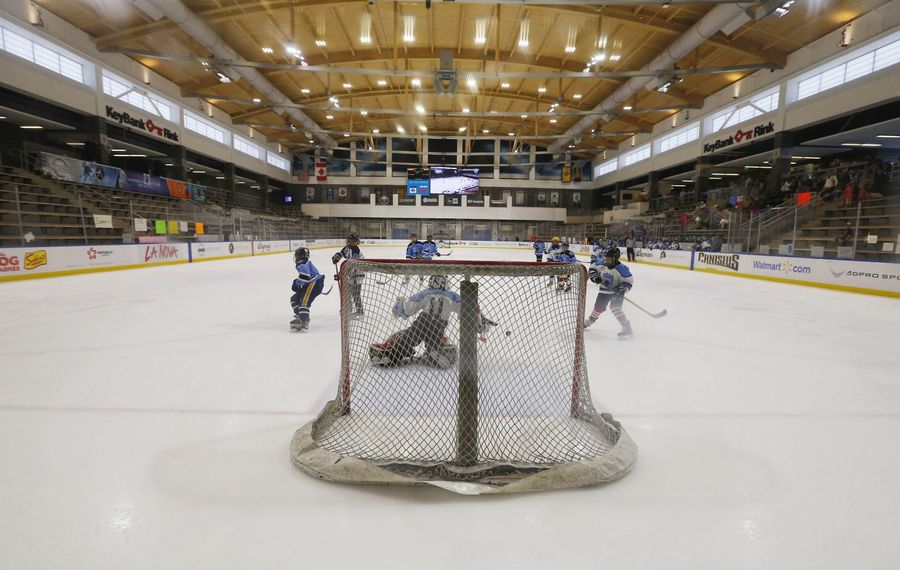 As the 11 Day Power Play heads into its final weekend, there will be an emotional Sunday finale – and there are already plans for the event to return next year.

Amy Lesakowski, the executive director of the 11 Day Power Play, said the fundraiser will be back in 2019 with the same "Community Shift" format it had this year.

"At the closing ceremony last year we mentioned that we weren't going to stop," she said, "and we're not going to stop. We just hope the event becomes more successful. We look forward to future years to support the community and the fight against cancer."

The 11 Day Power Play was started in 2017 by Amy Lesakowski and her husband Mike. The event raised $1.2 million that year, in which a group of 40 amateur hockey players, including Mike Lesakowski, participated in a marathon game at HarborCenter that continued around the clock and lasted more than 10 days and 10 hours, surpassing the previous world record for the longest hockey game.

This year the event's "Community Shift" format had different groups from the community participate as hockey again continued around the clock for 11 days. This year's fundraising total surpassed $1.2 million Wednesday night.

"The support last year was incredible with our 40 guys, and there were people who wanted to help and come and play, but not everyone realized the guidelines that we had to follow," Amy Lesakowski said, noting that that interest was what sparked the "Community Shift" idea.

"We knew every four hours, we'd need two new teams," Amy Lesakowski said. "We thought in Buffalo, we can do this. Buffalo is a hockey town and it's a city full of good neighbors."

More than 1,500 players along with 400 volunteers, including officials and off-ice personnel who donate their time, are involved this year. Nearly 120 teams have participated.

In going to the "Community Shift," Amy Lesakowski considered this year's venture a first-time event. The logistics involved in planning out that number of teams, around the clock, was a challenge, but Amy Lesakowski lauded event manager Sara Shumacher for her work.

"It's been a year in the making, and Sara Shumacher has been incredible," said Amy Lesakowski. "I'm a social worker and my husband is an engineer, and we needed her guidance. Between the three of us and the entire community stepping up, that's why we are where we are. It's just people pulling together and helping, people with different expertise have reached out to help us. It's overwhelming."

The original group of 40 players from 2017 have been a presence during this year's event, helping out in various ways.

"The 11 Day guys have been here throughout, hopping on teams with shorter numbers, or jumping in and refereeing," said Amy Lesakowski, noting that a group of the 2017 players, including Mike, played a game from 2 to 6 a.m. after one team wasn't able to make it.  The original guys haven't been on ice as much, but they've been on the ice a lot."

Amy Lesakowski said husband Mike – who skated five shifts as of Thursday and was scheduled to play in at least three more – is interested in reprising another record-setting attempt in the future, but that immediate plans for next year are for the community shift.

This year's 11 Day Power Play will conclude Sunday evening with some special final "shifts." At 2 p.m., members of the Olympic gold medal-winning U.S. Sled Hockey team will play, followed by games in which the top three fundraising teams skate against squads that feature Buffalo Sabres alumni and Buffalo Beauts players.

"Those three teams have raised a combined $137,000," Amy Lesakowski said. "Sunday is going to be very special."

With the weekend still to come, Lesakowski is hopeful that the fundraising total will go even higher. The event benefits Roswell Park (80 percent), as well as Camp Good Days (10 percent) and Make-A-Wish (10 percent).

"We have some great groups that are coming in that have not played yet, and the merchandise we have is very popular," she said, noting a new merchandise shipment arrived Thursday. "We have bands every evening and it's an ongoing community event.

"Seeing the fans come in to root each team on and to cheer and dance in the stands, and the stories that are being told with each of these teams ... we had a gentleman who lost his father two weeks ago, but it was so important for him to be here playing. We keep hearing how people are taking the sport they love and honoring and supporting those who are battling cancer."