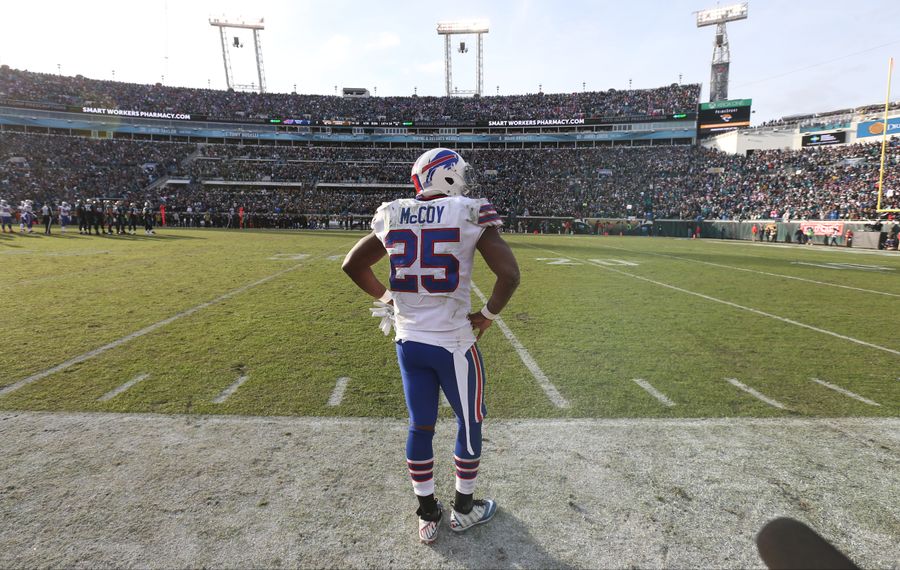 This is the first in a series on 10 key questions facing the Buffalo Bills entering training camp. Read the rest of the questions here.

Buffalo Bills fans weren't impressed with the performance of Mike Tolbert last season as the team's backup running back.

Neither was the rest of the NFL, apparently, as Tolbert remains a free agent.

To address that, the Bills added former Jaguars running back Chris Ivory in free agency. The plan was for him to take over the No. 2 duties, the thunder to starter LeSean McCoy’s lightning. Now, however, all that is up in the air.

After shocking allegations of domestic, child and animal abuse were made against McCoy on Tuesday, his status is a huge unknown heading toward training camp. Make no mistake — McCoy is the Bills' most indispensable player. Even though he turns 30 on Thursday, the offense in 2018 figured to be built around him. He's made three straight Pro Bowls since coming to the Bills in a trade with Philadelphia, and finished with 1,138 yards in 2017 — although his average of 4.0 yards per carry was the lowest of his nine-year career.

What happens if he’s unavailable to lead the offense is a question the Bills are now forced to consider.

Read all 10 questions in this series
Can Trent Murphy pick up where he left off?

Can Zay Jones rebound from a miserable offseason?

Can Tre'Davious White make the jump from solid to elite?

What happens if LeSean McCoy is unavailable?

Barring a roster move, Ivory would be the first option. The 30-year-old averaged a career-worst 3.4 yards per carry in 2017 with Jacksonville, finishing with 382 yards and one touchdown on 112 carries. Jacksonville released him in February to save $3.75 million against the salary cap. The Bills signed him less than two weeks later to a two-year contract that’s worth up to $6 million.

"He works tremendously hard. He’s had a great offseason," Bills running backs coach Kelly Skipper said. “The thing he has is the ability to run between the tackles and get tough yards. In the offseason, you’re not really in pads, so I’m looking forward to seeing him in training camp … He can be that physical runner we’re looking for. He’s been good in short yardage and goal-line situations in the past, so hopefully we can get the best version of him.”

Skipper has a history with Ivory. He coached him as a freshman at Washington State in 2006, and then again with the Jaguars in 2016.

"He’s quiet, but when he gets on the field, he’s so physical he turns into a different person," Skipper said. "We’re happy and excited to have him. We can’t wait to get the pads on and see what he does for us."

Ivory has had success as a feature back before. He led the AFC in rushing with the New York Jets in 2015, gaining 1,070 yards. That led to a five-year contract with the Jaguars, but an undisclosed injury at the start of 2016 cost him the first two games. He never regained his form from New York in Jacksonville, finishing with 821 rushing yards and four touchdowns over two seasons, along with 41 receptions for 361 yards and one touchdown in 25 games.

It’s fair, then, to be skeptical of Ivory adequately replacing McCoy.

“I’ve been told my whole career I can’t do this, can’t do that, but here I am,” Ivory told The Buffalo News during spring practices. “I’ve got a goal in mind for how long I want to play, and I’m just happy to be here with this opportunity.”

Ivory was a healthy inactive in January when the Jaguars hosted the Bills in a wild-card playoff game. He came away impressed with what he saw from Buffalo in a losing effort, then felt at home with the team’s atmosphere after making free-agent visits to Western New York and Cleveland.

“I feel like this is a team on the rise,” he said.

Ivory is followed on the Bills’ current depth chart by Travaris Cadet, Taiwan Jones, Marcus Murphy and Keith Ford. Cadet appeared in six games last season, rushing for 93 yards on 22 carries before suffering a season-ending injury against New England in Week 16. That opened a spot for Murphy on the 53-man roster.

“All of our backs are going to have their roles … as this thing works itself out over the course of the next few months here,” Bills coach Sean McDermott said last month. “We like the facts of what Chris has done with the ball in his hand, without the ball in his hand. He does bring a veteran presence to the table, as well, in that room, which is important. He’s been a nice addition.”

If the Bills look for help outside the organization, there are some big-name, veteran options still on the open market. DeMarco Murray, Adrian Peterson and Jamaal Charles are all familiar names who are well past their prime, but could be considerations.

Lesser options like Shane Vereen, Alfred Morris and old friend C.J. Spiller are also on the market. None of them, however, would make the Bills forget about McCoy, which is a scenario they hope doesn't come to fruition.