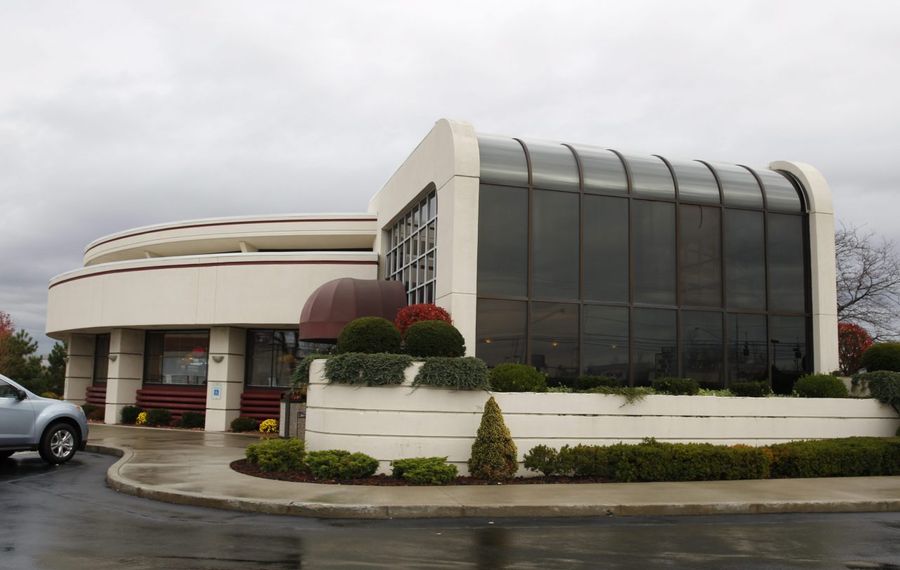 Alvin Wright redrew the cultural map of the City of Buffalo. As much as anyone, he democratized Buffalo culture and commerce.

No one has ever wanted to give him credit for it.

What Wright did was prove that Buffalo's most sophisticated movie audience would be just as happy seeing great movies in Cheektowaga as they were seeing them in North Buffalo or northern suburbia. He proved that if you build it, they will come.

He built the Holiday One and Two theaters. They did indeed come — in droves. He died more than 30 years ago, but the revolution in geographical consequences he began transformed Western New York.

It was only a matter of time before Union Road would develop as it is today and the Walden Galleria would grow up next door. Wright hadn't just made his point, he'd made it in thunder, as Herman Melville might have put it.

The last of those amazing facilities on Wright's Union Road site — the Holiday Showcase restaurant — closed Sunday. Anyone seeking a whipped cream-bathed strawberry dessert delight will have to go elsewhere. That's it. 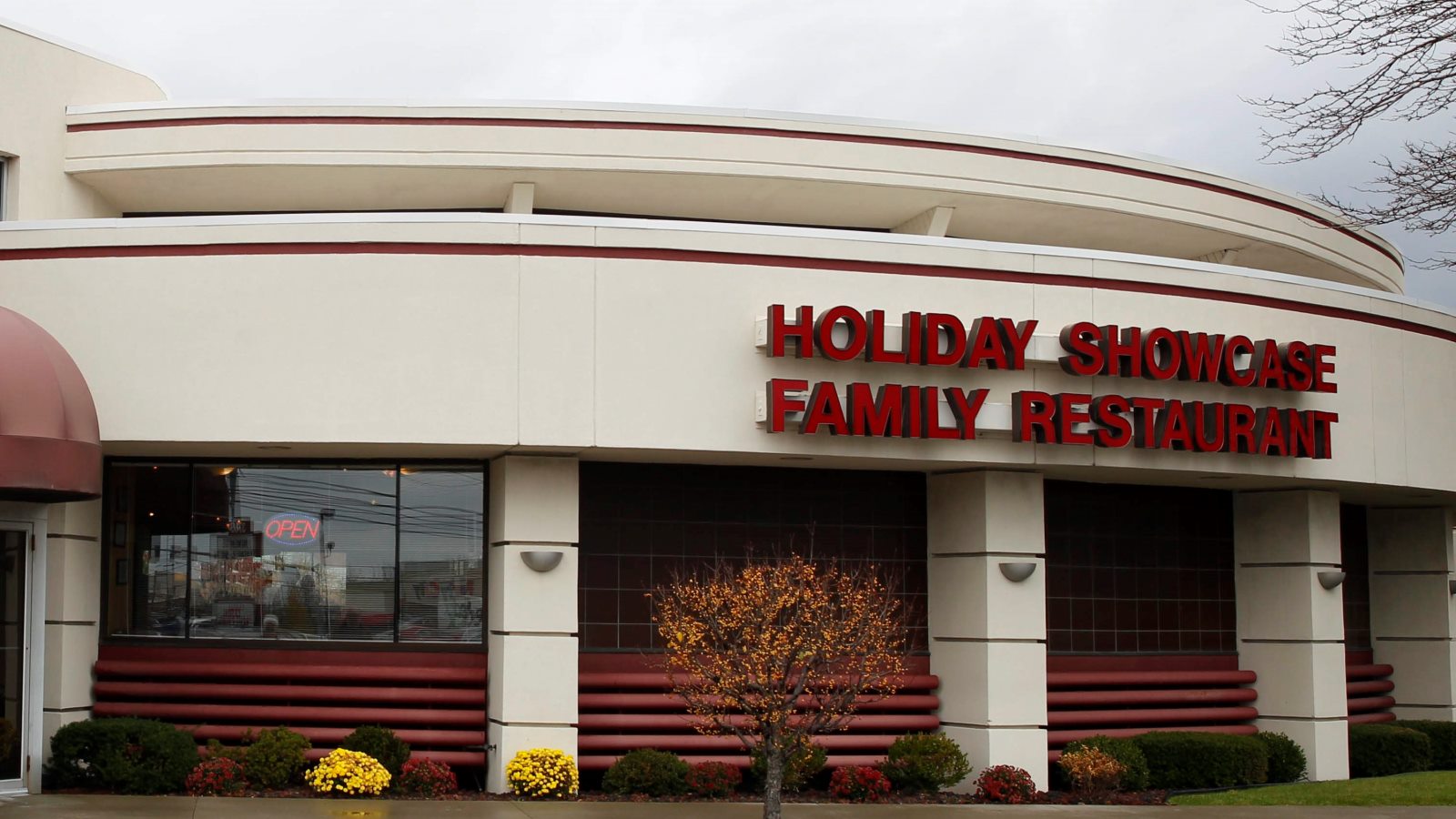 Everything else in Wright's little village is all gone — the Holiday theaters on his Union Road property, the Aerohead Inn, the wonderful Garcia's that was behind the Showcase and, before them all, Wright's Aero Drive-In Theater.

The first modernized Buffalo movie theater was the Cinema I and II across from the Boulevard Mall on Maple Road. The idea was that smart-aleck movie folk from the Delaware, Central Park and University districts would have no trouble traveling north to see, say, John Boorman's "Point Blank" with Lee Marvin.

Wright's first two theaters — the Holiday One and Two — were something else. People who never dreamed they would drive to Cheektowaga for culture did just that.

From the moment they were born, the Holiday One and Two theaters became the region's showcase movie houses — huge, with big screens, good sound and projection and comfortable seating.

That's why in 1972, they were chosen by Paramount for the Buffalo site of one of the historic movie screenings of the era — the first local screening for press and bigwigs of Francis Ford Coppola's "The Godfather."

It was a truly great place to see the modern classic for the first time. It was a prestigious modern movie treated like one. 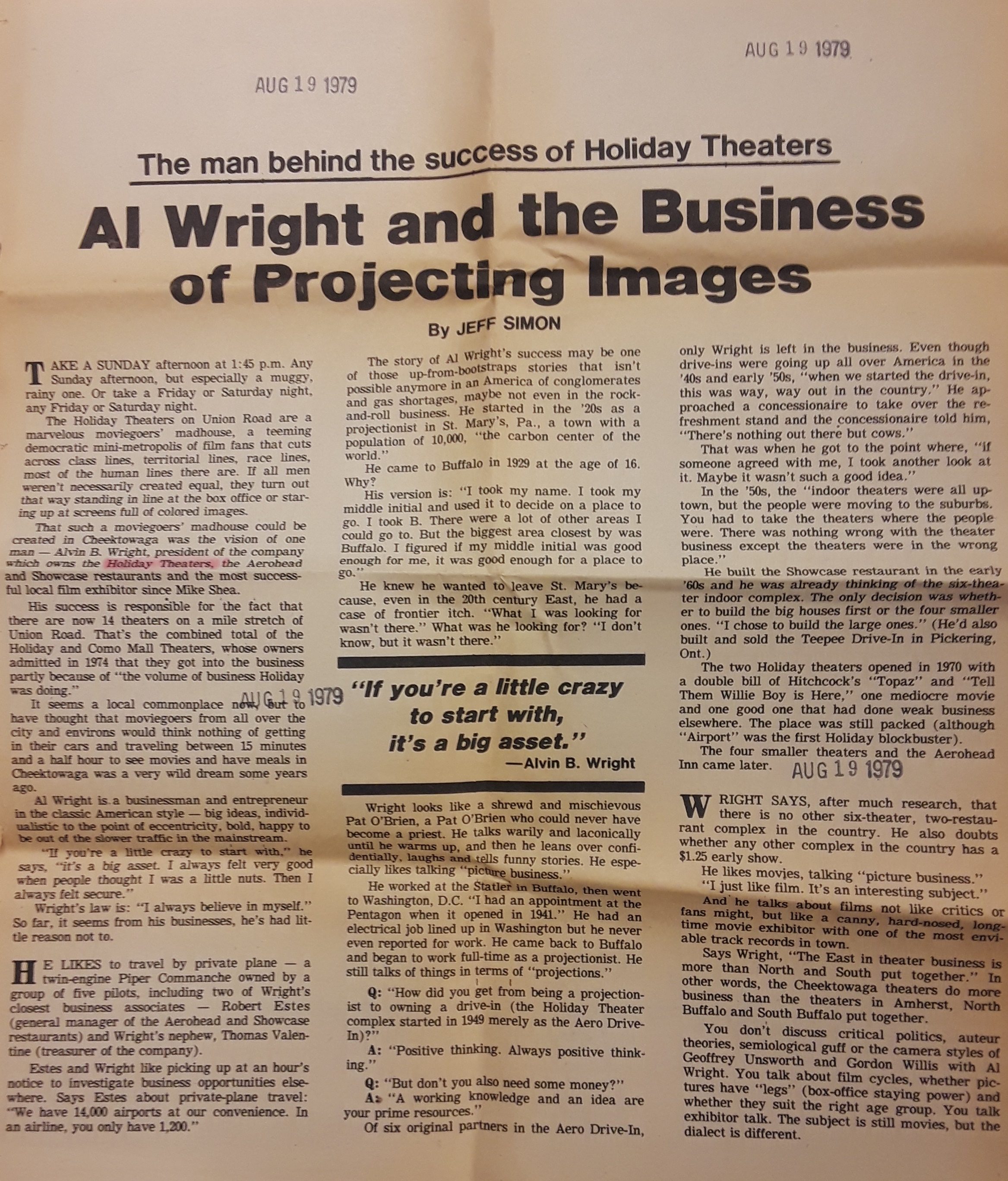 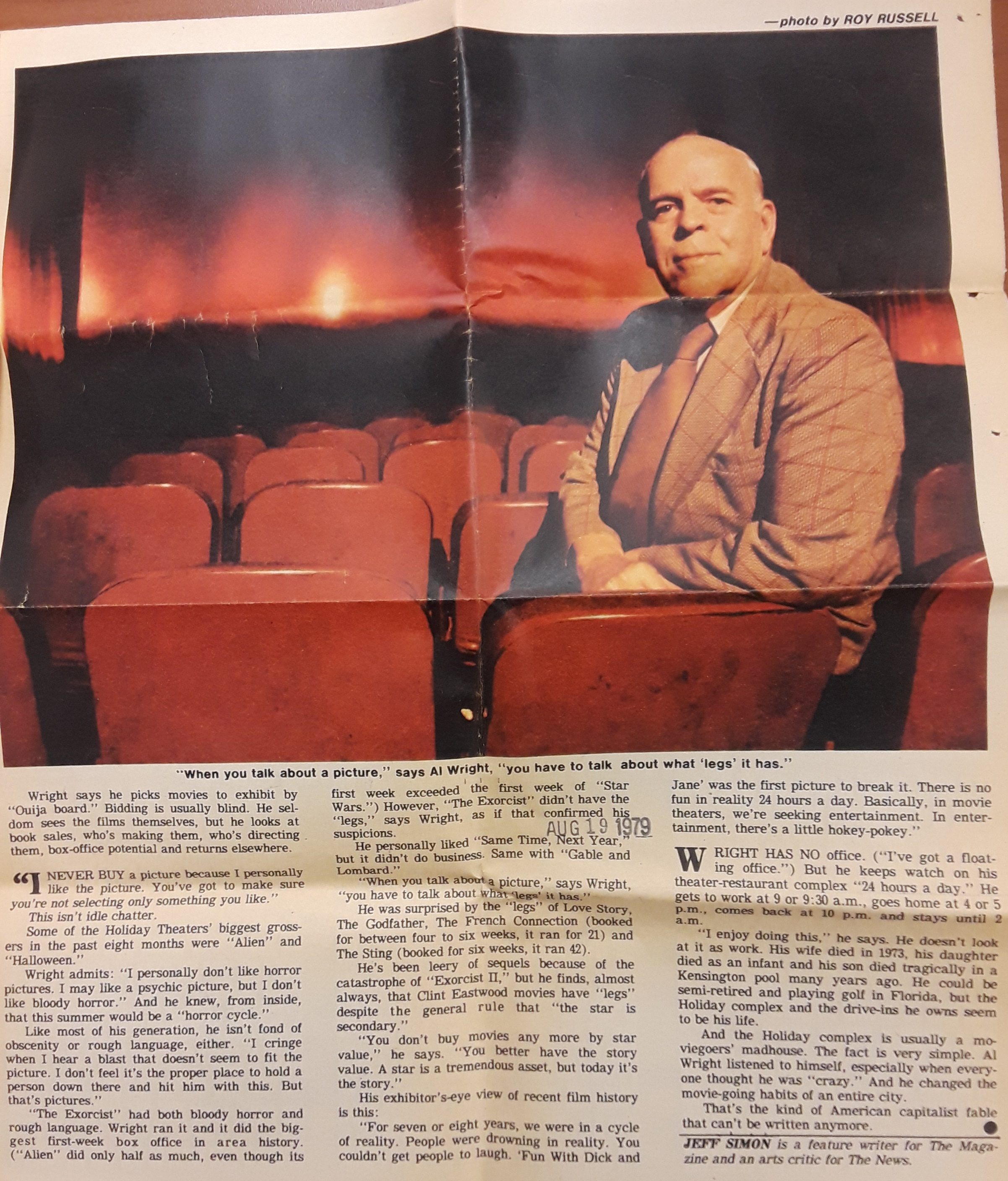 All right, there was an awful moment at the premiere screening when, at one of the film's most wrenching moments (when Michael's adorable young Italian wife has been blown to smithereens in a car bomb obviously meant for Michael), one of the theater workers burst in, screamed a license plate number at the top of his lungs and told the assembled multitude, "your lights are on in the parking lot."

Pure Al Wright that. He always wanted to protect his customers. It would never have occurred to him that a dramatic moment in a towering cinematic classic should not be interrupted by the consequences of a patron turning into a forgetful doofus in the parking lot.

The entire movie audience was changing all through the 1970s in America. The Holiday theaters were perfectly designed for it. Moviegoers were becoming more serious and knowledgeable. The old trashy neighborhood moviehouse wouldn't do anymore.

Wright was a former movie projectionist. He'd built a couple of state-of-the-art movie houses — ones I enjoyed going to as long as they had movies. His friend Bob Estes built a kind of casual adjoining restaurant — a weirdly plush burger joint with good coffee and dessert. It was, as designed, a good place to grab quick meals before or after a flick. 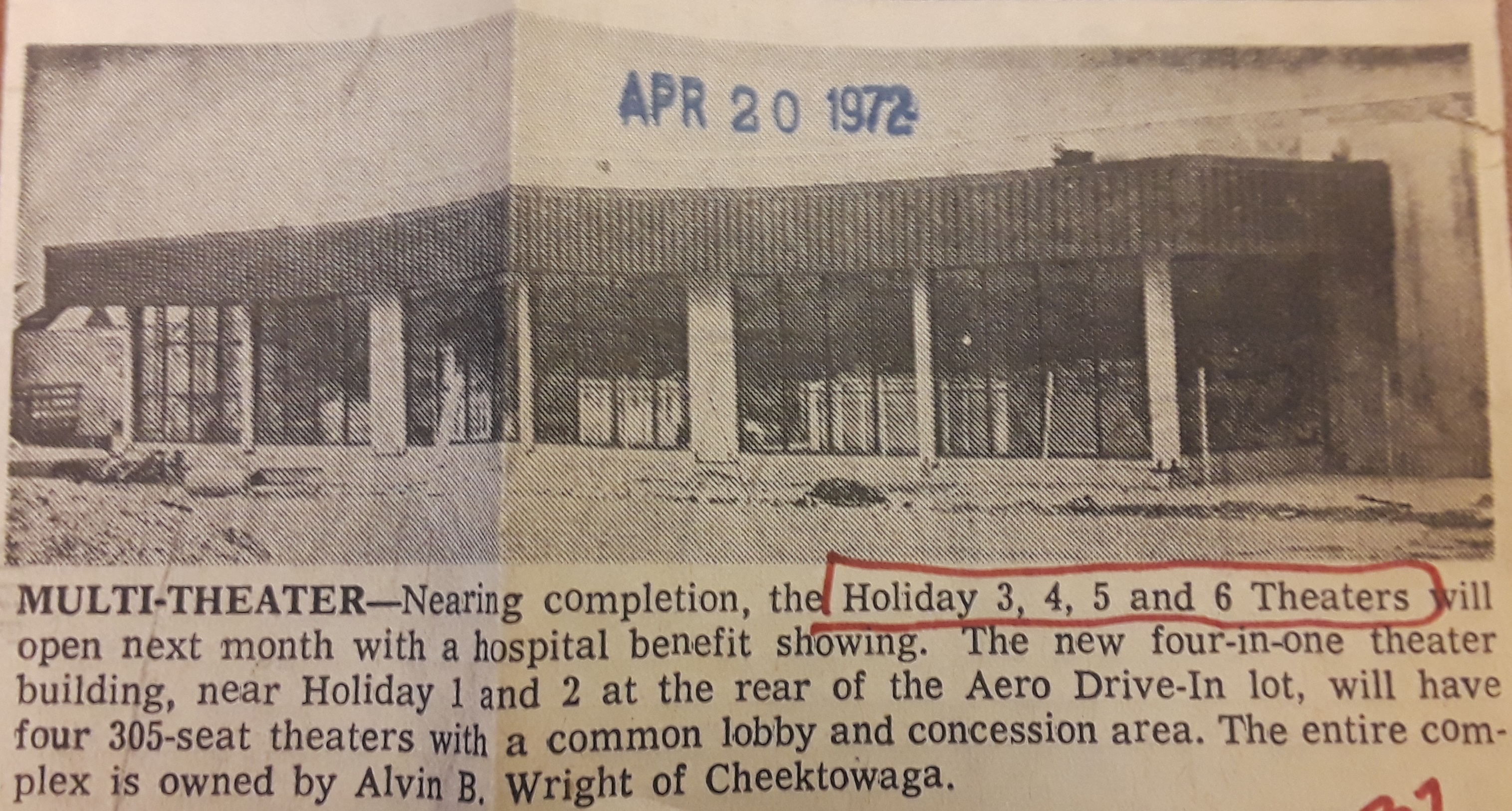 An item about the Holiday theaters' expansion in the April 20, 1972 edition of The Buffalo News.

A little later Garcia's behind the Holiday Showcase would offer good Mexican food. (Earlier, the Aerohead Inn had been the upscale place on the lot.) But, sadly, the quality would sink badly in the Holiday Three, Four, Five and Six theaters built on the back of Wright's parcel of land.

The films shown were usually good, but the projection could be dicey and, even worse, the sound bleed in those theaters could be fierce. You could be watching a quiet scene while, in the theater next door, extraterrestrials and actors from Sheboygan could be heard battling it out for the bragging rights to the universe.

The point Wright made couldn't possibly have been more worth making — if you build it they will come; and if you show it, they will come. People who want to see a good movie will travel well out of their neighborhoods if they are reasonably sure of the results.

Upscale tastes could be sated anywhere. All it took was for theater employees to be prevented from yelling out license plate numbers while great movie masterpieces were being shown.

I'm sorry the last vestige of Wright's demographic revolution on Union Road is now closed. The Holiday Showcase building remains. It even had to be rebuilt once after a tornado demolished it. Presumably, it's solid.

The world is full of nostalgists who might want it back with all its burgers, fries and whipped cream. Who knows what revolutionary things others might want to do with it.

I'd like to think Al Wright would give them all a hearing — for a couple of minutes, anyway.