It’s a 400-mile vacation consisting of aching muscles, history lessons and a winding trail that snakes east toward Albany.

The Cycle the Erie Canal bicycle ride kicked off Sunday morning in Buffalo as roughly 700 people hit the road for the event’s 20th anniversary.

It’s like a “summer camp for adults,” said Lisa Hurowitz, 57, at Amherst Veterans Canal Park on Sunday, watching dozens of bicyclists roll in to the first stop  just before 11 a.m.

“You meet up with the same people every year,” said Hurowitz, a tour volunteer and rider, from Baltimore, Md. “These are our hardcore bikers.”

She’s participated in the ride for roughly seven years.

The tour draws people from across the United States to enjoy the Erie Canal and upstate New York’s history.

Cathy Tanner, 72, from Seattle, Wash., spun around a corner of the trail Sunday morning in Pendleton, an old canal town.

“We’re having a great time,” she said, standing in line at Uncle G’s Ice Cream. Tanner brought her 11-year-old grandson, Tristin, along for the ride. 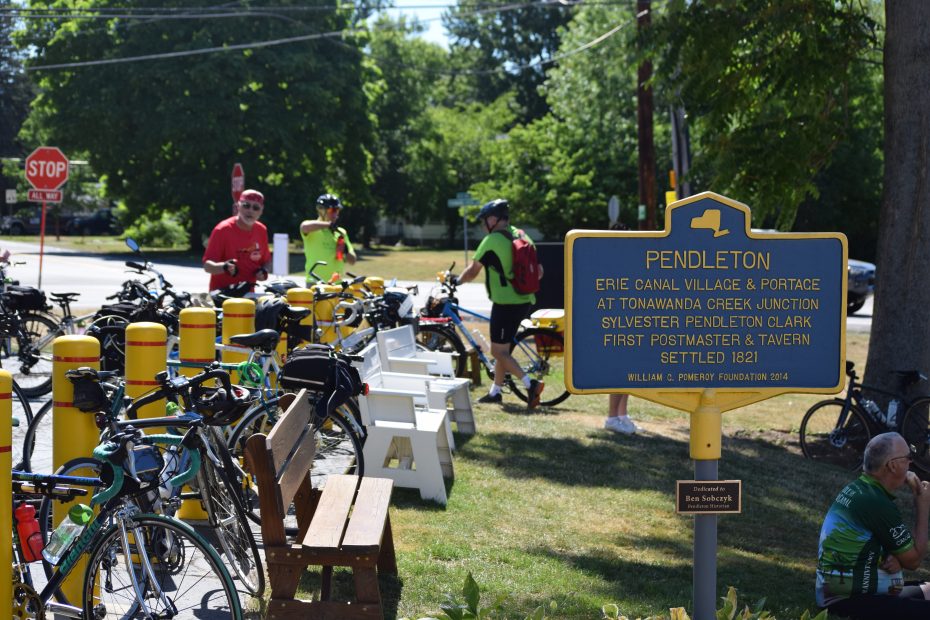 Bicyclists stopped in Pendleton on Sunday morning after the 2018 Cycle the Erie Canal tour kicked off in Buffalo. (Sam Ogozalek/Buffalo News)

Western New York residents participated, too. Craig and Gay Smith, of Kendall, rested at the tour's morning stop in the park, leaning against their bicycles around 11 a.m.

Craig, 64, said he and Gay, 65, trained for the tour. They typically ride about 5 to 10 miles per day. It’s the couple’s first time participating in the event, Gay said.

“I wanted to buy a Harley, and she said, ‘You get that Harley, you gotta do the Erie Canal with me.’ That was a few years back,” Craig said. “So, we’re doing the canal.”

They’re committed to the entire ride across New York. It’s a vacation, Gay said. By a little bit before noon, Craig and Gay were nearing a small, walking bridge just off Tonawanda Creek Road in Pendleton.

The Erie Canalway Trail is about 80 percent complete, and by 2020, is scheduled to be finished as part of New York’s sprawling, 750-mile Empire State Trail project announced by Gov. Andrew M. Cuomo in early 2017.

About 1.6 million people visit the canal trail every year, according to state officials.

The canal tour concludes July 15 in Albany, and riders usually cover about 40 to 60 miles each day before setting up camp at night.

The bicyclists are also scheduled to visit the Women’s Rights National Historical Park in Seneca Falls and Rome’s Fort Stanwix, a Revolutionary War-era site, among other places.

A checkpoint was organized at Amherst’s veterans park after the ride kicked off Sunday morning outside Nichols School.

Hurowitz, a rider and volunteer, standing near a food tent, said the event grows every year. When she first started, there were only about 40 volunteers, Hurowitz said. There are 90 now, she said.

She’s driving with the tour’s support staff, but is also hopping on a bicycle near Medina, for a bit.