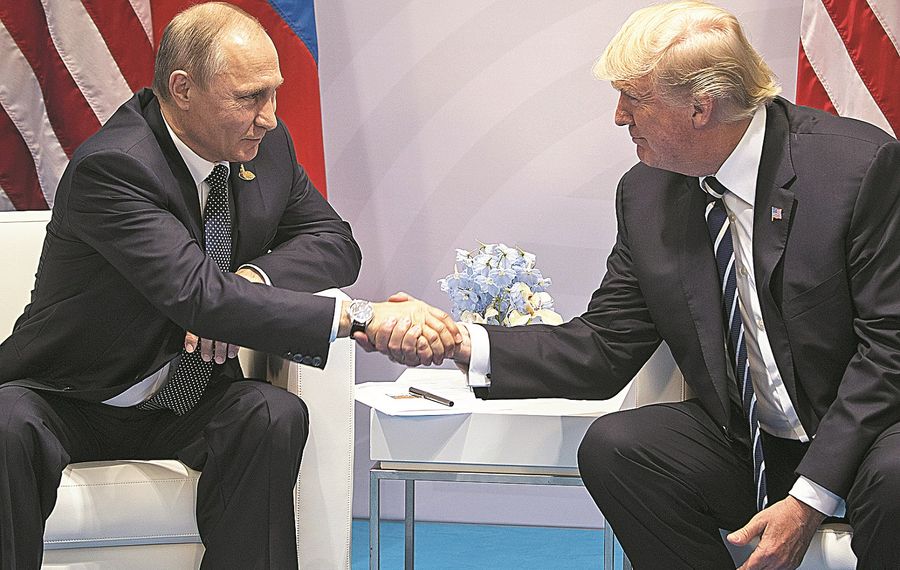 WASHINGTON – The Senate Intelligence Committee this week released some bold findings at a cowardly time, which is why you might have missed them.

On the afternoon of Tuesday, July 3 – when many Americans were paying more attention to their Independence Day plans than to the news – the panel said what every American, including the one who benefited the most, should accept as fact by now. Republicans and Democrats on that panel agreed that Russia tried to steer the 2016 presidential election to Republican Donald Trump.

The Senate panel's report is a preliminary one; it plans to release more details as it continues its Russia investigation. But still, the Senate report is an important, informative document, though it is couched in bureaucratese.

Here are its central conclusions, translated from bureaucratese:

So who do you trust? House Republicans who claim there was "no collusion" between Russia and the Trump campaign when the intelligence community didn't even examine collusion? House Democrats who rejected the Republicans' conclusions? Or the seven Republicans and six Democrats on the Senate Intelligence Committee?

• "The ICA is a sound intelligence product." The ICA stands for "Intelligence Community Assessment," that January 2017 report from the CIA, NSA and FBI that said the Russians meddled in the 2016 presidential election. The Senate panel, which includes highly regarded Republicans such as Sen. Richard Burr of North Carolina and Sen. Marco Rubio of Florida, basically said those intelligence agencies got it right. What's more, the Senate report said: "The committee heard consistently that analysts were under no politically motivated pressure to reach any conclusions."

• "The ICA states that Russia's state-run propaganda machine...contributed to the influence campaign by serving as a platform for Kremlin messaging to Russian and international audiences." The Senate panel confirmed this assessment. This means Putin and his henchmen did all they could to misinform the American public – through RT (the Russian propaganda network that is conveniently available to Americans in many U.S. cable packages) and through trolls who flooded social media with messages designed to divide America and boost Trump.

• "In July 2015, Russian intelligence gained access to Democratic National Committee (DNC) networks and maintained that access until at least June 2016." This sentence comes directly from the 2017 intelligence community assessment, and the Senate Intelligence said the spooks got it right. Simply put, Putin's henchmen did exactly what President Richard Nixon's henchmen did 44 years earlier: they broke into the opposing party's headquarters to try to steal secrets. The only difference is that now that we're in the internet age, the Russians broke into the DNC's online headquarters.

• "The ICA did not attempt to address potential counterintelligence investigations – for example, whether Russian intelligence services attempted to recruit sources with access to any campaign." This means that the intelligence community did not go looking for collusion between Russia and the Trump campaign. That continues to be the job of Robert Mueller, the special counsel appointed last year to investigate Russian meddling in the 2016 election – whose work has already resulted in five guilty pleas and 17 indictments.

Think of all of this, then, the next time Trump tweets about a "witch hunt," and if he once again says he trusts Putin more than he trusts America's own intelligence agencies.

Sure, maybe the president is right and there's no collusion.

But there are witches (or warlocks) – and the high priest of the coven is named Putin.

And two years after he tried to throw the American presidential election to Trump, Putin will no doubt flash a devilish smile when he meets his American counterpart at  a summit in Finland on July 16.

The New York Times explains how Andrew Wheeler, who is likely to succeed Scott Pruitt as Environmental Protection Agency administrator, differs from his predecessor ... The New Yorker tells us that parents of immigrant children taken from them at the Southern Border are having trouble reuniting with them ... The New Republic says overturning Roe v. Wade could remake American politics ... Vox says Bill Shine's arrival as a communications official in the Trump White House signals that the administration policy continues to be "triggering the libs" ... New York Magazine takes a close look at the newly elected president of Mexico, Andrés Manuel López Obrador.