Buffalo has talked for years about removing 1950s-era highways that harmed neighborhoods.

Down the road in Rochester, they're doing it.

A stretch of sunken highway that ran two-thirds of a mile east of downtown, known as the Inner Loop East, was filled in last year, creating 6 acres of undeveloped land and a smaller, at-grade, four-lane roadway. That is reuniting the East End neighborhood, including Monroe and Park avenues, with downtown's business district, enhancing walkability and returning land to the tax rolls.

The $21 million project is also generating tens of millions in economic development and bringing more vitality to a formerly moribund section of downtown. Two years from now, upscale, market-rate and affordable apartment units, a hotel and shops, along with an expansion of the Strong National Museum of Play are expected to be hubs of activity where the walled-in highway stood.

"This project is repairing the urban fabric and restoring the street grid by knitting back together a section of the city that was previously separated," said Robert Stark, a Buffalo-based partner with CJS Architects, part of the project's planning team.

"These projects are always challenging, and there are a lot of players involved in making something like this happen," Stark said. "But this obviously shows it can be done, with a positive benefit to the entire city."

Although Buffalonians might be surprised to see a portion of a highway disappear, the Inner Loop East in Rochester was not used nearly as much, nor was it as expensive to replace, as highway removal projects talked about for Buffalo.

Stark, who grew up in South Buffalo and works in the Larkin District, is familiar with calls for removing or decking over the Kensington Expressway, also known as the 33, or tearing down the 110-foot-tall Buffalo Skyway along Route 5.

"Buffalo has its own challenges that are related to some of these '50s-era transportation initiatives, as do many cities around the country," Stark said.

"The main thing is, this shows it can be done."

Construction of the Inner Loop began in the early 1950s, the decade when Rochester's population had peaked at more than 330,000, as opposed to the current population of about 208,000. The highway was completed in 1965.

Over time, car usage dropped as residents and jobs left the inner city. Like so many highways built during the urban renewal that occurred throughout the Northeast during that time, the Inner Loop came to be seen as a physical and psychological barrier dividing downtown from the rest of the city.

With vehicle use on the Inner Loop East dropping to about 6,000 daily — compared to 71,000 vehicles that travel daily on the downtown portion of the 33 in Buffalo — Mayor Thomas Richards' administration hatched the plan to fill in the highway and dispatch the cars onto a surface road. He proclaimed at the time that removing the highway would improve the city by creating a better quality of life, including encouraging more walking and biking and promoting density.

The project became feasible after the city, on its third try, was able to get $18 million in federal transportation money. Upgrades in infrastructure undertaken by the city, from new lighting and curb cutouts to permeable bike paths, also enticed developers to invest. 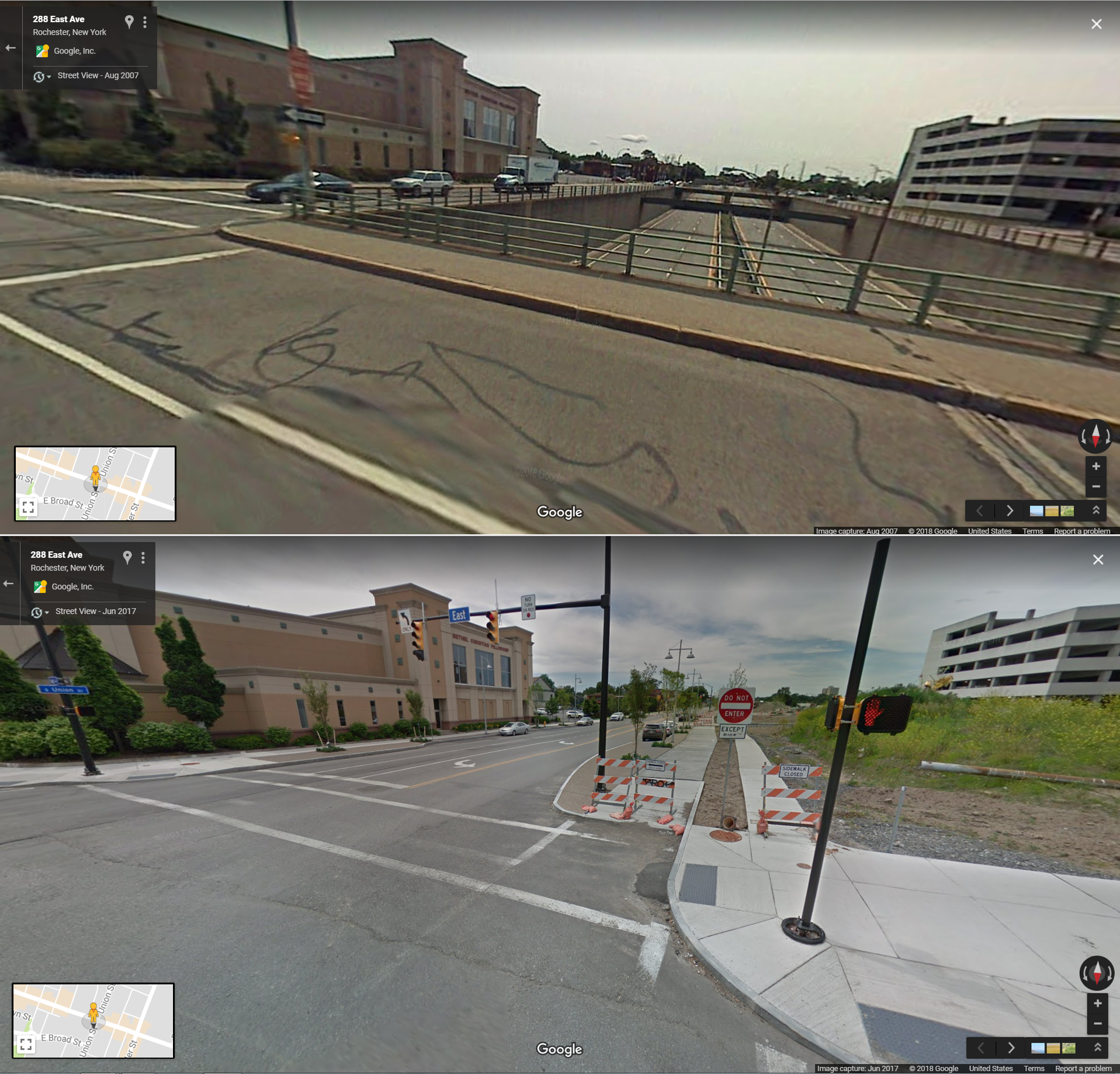 New infrastructure, including bike paths, cutout curbs and lighting, are part of a four-lane highway that vehicles that used to travel on a sunken highway are diverted to. Apartments, a hotel and expansion of the Strong National Museum of Play will soon rise where the highway stood. Here's a before-and-after view from 288 East Ave.

"It's a game-changer," Karsten Solberg of CJS Architects said of the transformation now taking place. "The bike usage since this has happened has skyrocketed. They have those rental bikes that didn't happen before. It's a totally different attitude that I think has picked up around this project."

Excited by the potential, Mayor Lovely Warren is now considering doing something similar to the sunken northern section of the Inner Loop.

Unlike the Rochester highway, low vehicle usage is not the case with the three-quarter mile portion of the Kensington Expressway that some want removed. It has created a wedge through the East Side since its construction between 1961 and 1965.

Proponents, including the Restore Our Community Coalition based on the East Side, want to see the return of the Frederick Law Olmsted-designed Humboldt Parkway that once stretched between Delaware and Parade (now Martin Luther King) parks.

One proposal is to start with a nearly mile-long stretch between East Ferry and Best streets, and decking it over to create what's being called the Humboldt Parkway Promenade. The tens of thousands of cars that now use the highway on weekdays would travel through a tunnel under the deck.

Another, less expensive approach would be to fill in the stretch of highway, similar to what was done in Rochester. This would send cars onto thoroughfares that can better handle the traffic. The cost to do that has not been tallied.

In 2016, Gov. Andrew Cuomo called for a $6 million study to provide a more complete environmental assessment and detailed cost analysis of different options. The study has yet to be completed.

"We have met with community leaders and elected officials about the project and we are completing a scoping report, which will outline project plans and potential funding, a significant step in the project moving forward," said Joseph Morrissey, a New York State Department of Transportation spokesman.

"The study is stuck in the damn mud on somebody's desk somewhere," Geter said.

There have also been calls to remove the heavily traveled Skyway. Proponents say it cuts off downtown from the waterfront, limiting public access to the water and unused land from being developed. But the cost to do so, and figuring out other ways to transport more than 40,000 drivers daily have proven to be obstacles.

The state Department of Transportation earlier this year began a $29 million redecking project to keep the highway intact for years to come.

Rep. Brian Higgins, D-Buffalo, thinks that never should have happened.

"It goes way beyond the removal of the Skyway. It's a lack of vision and boldness. We should be better about this, especially in the new Buffalo."

Higgins believes decking a portion of the 33 by the Buffalo Museum of Science into a parkway-like environment could serve as a demonstration project that could get the project off the ground.

"If you're trying to get a $500 million appropriation to get it all done at once, it's not as viable as taking an incremental approach to demonstrate the great benefit of covering the 33 in front of the MLK park and the science museum. That's doable," Higgins said.

"That will get you to a point in which you eventually get it finished," he said.

Higgins said Buffalo could learn a lot from Rochester's attitude.

"The people in Rochester demanded something new, something that fits with the new Rochester," Higgins said. "That project will change downtown Rochester and it will change the perception of that region in Monroe County.

"That's versus Buffalo, where people look at the Skyway and the 33 and accept that it's always going to be that way, so why fight for anything different?" Higgins said.

"The communities that realize their full potential are the ones who stand up and demand that the state Department of Transportation look differently at these kinds of projects," Higgins said. "They're not just transportation projects. They are transformative, both in terms of life quality and economic development."

Morrissey said the state Department of Transportation looks at the Rochester and the 33 projects as vastly different.

"Every project is different and the size, scope and design of these two projects varies significantly, with the Kensington proposal being the more complicated," Morrissey said, noting the proposal calls for a tunnel with a landscaped cover.

Other cities, including Milwaukee, Kansas City, Mo., New Haven, Conn., and Syracuse, have either removed highways that were remnants of now-discredited urban renewal projects, or are considering doing so.

In Rochester, Chris Spinelli, co-owner of Roc Brewing Co. on South Union Street, across from the soon-to-be developed parcels of land, said the change for his business and the surrounding area has already been significant.

Without the highway as a pedestrian impediment, Spinelli has seen attendance increase, including after weekly concerts at a nearby park.

"When we moved in, this street was a cut-through for the inner loop," Spinelli said. "Now it's slowly and surely becoming a neighborhood."