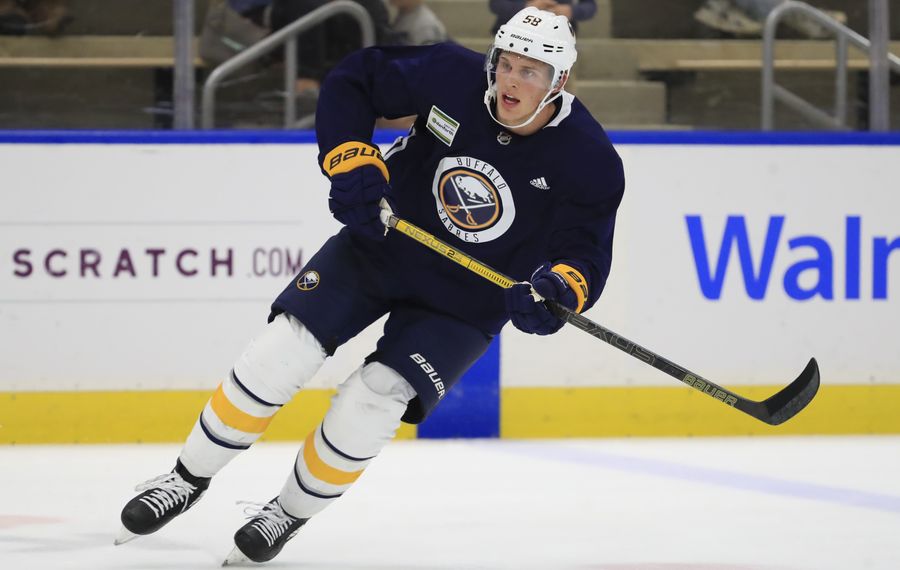 The fans chant as No. 58 skates across the ice during the final day of Sabres development camp. He zig-zags to avoid defenders on his way to the goal, where he takes a shot on net before retreating to the bench at the end of his shift.

He returns to the ice, this time on the same pairing as No. 1 overall draft pick Rasmus Dahlin. He feeds Dahlin a pass, to the applause of the adoring crowd, before he is intercepted by opposing players.

The chants weren’t for legendary Sabres player and former executive Don Luce, who was sitting in the stands proudly watching with his granddaughter in tow. Instead, they were for Griffin Luce, Don's grandson and a rising junior at the University of Michigan.

“It was great to see him get an opportunity to show what he can do,” said Don, now 69 and a scout for the Toronto Maple Leafs. “It’s a great experience, and he did a great job out there today. It makes grandpa very, very proud.”

Griffin Luce, a native of Williamsville, was invited to attend the camp and participated among the organization's top prospects for four days of on- and off-the-ice activities.

“It was an honor just to be able to put that jersey on for the first time,” Luce said. “Just a great organization they have here, and we have so much respect for it, and it goes a long time back with my family, so it was an amazing feeling.”

Up until this point, Luce’s favorite memories of the Sabres aren’t his memories at all.

There are the memories of his grandfather’s playing career, which have been passed down to him by various family members. Don played for the Sabres from 1971 to 1981 and was in the NHL for 15 years. He was inducted into the Sabres Hall of Fame in 1986 and served as head of player development from 1987 to 2006.

Griffin said he didn't really understand how good a player his grandfather was until he was about 10 years old.

Luce also has an appreciation for Sabres history. Even though he was only 2 years old, young Griffin was along for the playoff ride in 1999, including the Game 6 Stanley Cup final loss in triple overtime against Dallas that gave the Cup to the Stars. He was in the building that night.

Luce, a lefty defenseman, was born in Wisconsin and raised in London, Ont., though he lived for a time with his grandparents in Williamsville and always has been around the organization.

He estimates that he’s been to about 20 Sabres games, but nothing compares to being out on the ice himself.

His grandfather isn’t the only one who has made a career out of hockey. Scott Luce, Griffin’s father, is the director of amateur recruiting for the Las Vegas Golden Knights. Scott’s uncle Mike Boland played for the Sabres during the 1978-79 season.

His father wasn’t in attendance and his grandfather was only there for the scrimmage, but they both made sure to give him valuable advice before he took the ice.

“Just to play, go out and have fun,” Luce said. “That's what they [the Sabres coaching staff] were harping at us. It’s not an evaluation. Just go out, have fun, take a deep breath and play your game.

"My grandpa and my dad just basically emphasized the same thing. Just use it as a way to step in there and play my game, so that's what I did.”

Many thought Luce would get an invite to a development camp earlier in his career, as he was expected to get drafted in 2016 after playing with the U.S. National Team Development Program and getting invited to the CCM/USA Hockey All-American Prospect Game. He was ranked as the No. 70 North American skater by the NHL Central Scouting and was projected to go in the middle rounds.

But his name wasn’t called, and Luce had to deal with the disappointment.

“Every kid hears of having their name called that day,” he said. “At the end of the day, a draft pick is a draft pick. You haven’t made the NHL yet.

"There’s many people that go undrafted and make the NHL and are able to live their dream. I know it was a letdown and it hurt a little bit, but there's nothing you can do. You can’t dwell on it because then it’s just going to hurt your game. I just let it go and moved on. You use it as a motivation tool to prove people wrong, and I think that’s what I did.”

A few months later, he started his freshman year at the University of Michigan. There he was coached by the legendary Red Berenson, a former teammate of his grandfather's from their time in Detroit. Berenson retired at the end of Luce’s freshman season.

Luce, a health and fitness major, hopes to work in sports after college if hockey doesn’t work out. He puts a big emphasis on his education, and he was a member of the Academic All-Big Ten team last year.

“My mom is a principal and she really harps on academics,” Luce said. “I know it's a great academic school. So being able to play hockey and get an education at an institution like that, I felt like it was a great fit for me.”

Luce has two goals and four assists in 61 games at Michigan and was named an alternate captain last season.

He said even with all the hockey success in his family, the only reason he continues to play is because he wants to.

“I know there is no pressure to succeed. They don’t force me to play hockey,” Luce said. “It’s strictly just because I grew up around the game. I developed a passion for it, and in my heart it's just what I like to do the best. There's no pressure at all from them. They are fully supportive of me.”