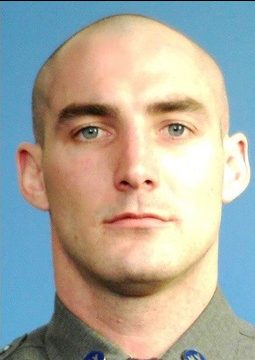 Calling hours have been set Saturday for a New York State trooper who was shot and killed in the line of duty near Corning earlier this week.

Clark was a 2011 graduate of Alfred, where he was a standout football player.

“He wanted to do one thing, which was to help people,” said Gov. Andrew M. Cuomo during a news briefing Monday.

Clark was among officers who responded to the home of Steven M. Kiley, 43, in the Town of Erwin at about 3:30 a.m. Monday after Kiley’s estranged wife called 911 and told police he was armed and suicidal.

Kiley was the kindergarten through 12th grade principal at Bradford Central School in Steuben County.

Clark, a trooper since 2015, lived in Troupsburg and was assigned to the State Police station in Bath. Cuomo on Monday ordered flags be flown at half-staff at state government facilities in honor of Clark.