Teddy Rivera always studied people, even before the second-by-second nature of combat in Iraq intensified that quality. So he admits it: He was not quite sure of what to make of Anna-Lesa Calvert when he met her, about five years ago, as he washed his car on a hot day on Carolina Street in Buffalo.

He lives in a nearby apartment with his wife Alexis and their two young sons. "She comes walking through, she's carrying a baby and she's handing out flyers," he said of Calvert. His first instinct was that she was a stranger in the neighborhood, someone working an angle or trying to sell something.

Calvert reassured him. She told him she simply hoped his kids might want to play in a city soccer program.

Rivera, 38, used a magnet to stick the flyer to his refrigerator, figuring it would hang there for a while, until he eventually threw it out. But it was summertime. His son Jeliel, then of kindergarten age, was eager for something new to do.

A couple of weeks after Calvert appeared, the Riveras grabbed their kids and headed for JFK Park on the East Side, one of the main sites for the Algonquin Sports soccer program.

In all the ways that matter, Rivera is still there.

"He's every parent's favorite coach," said Calvert, Algonquin's executive director. The organization's Soccer for Success program, in cooperation with the Independent Health Foundation, has grown to the point that it involves 2,250 city children, kindergarten through eighth grade, who take part at eight outdoor parks in Buffalo and one in Niagara Falls. They are involved with after-school instruction and with two summer sessions that go three times a week.

Last week, in a downpour, Soccer for Success held a a picnic at JFK to celebrate the end of the first session. Hundreds of parents and children showed up. Rivera moved through the crowd, slapping hands, hugging mothers and fathers and grandmothers and crouching to listen, eye-to-eye, as children told him stories.

To Alexis, it was evidence of an extraordinary transformation. Her husband remains in treatment for post-traumatic stress disorder. For years, after he returned from Iraq, he tried to find reasons not to leave his home. 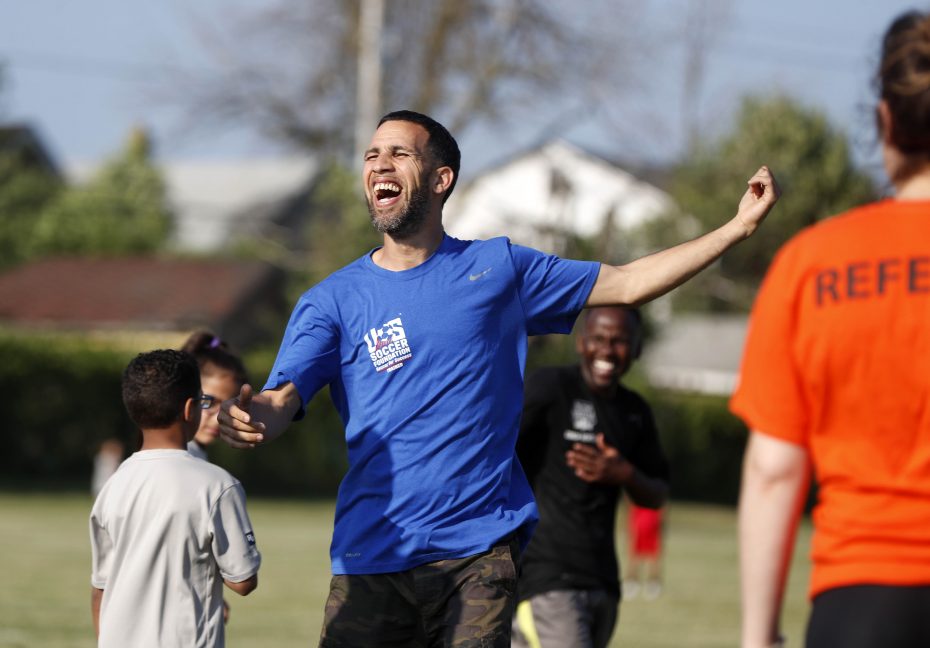 He expects, for the Fourth of July, his family will go to see the fireworks – a noisy scene he might have done his best to avoid, even a few years ago, because of the images triggered by the sound. For Rivera, Memorial Day is the national holiday of deeply intimate meaning, the one that makes him think most powerfully of national sacrifice, of the friends he lost.

In Iraq, he spent much of his deployment serving with the combat engineers along Route Irish, a code name for a 7.5 mile strip that was often called "the deadliest road in Iraq." The battered expressway, running from the Baghdad airport, was a regular target for roadside bombs and surprise attacks by insurgents.

That deployment equated to relentless tension. Rivera tells stories of being sent to the scene, just after close friends died. Sudden explosions were routine. He was in Iraq for 18 months, and he began to wonder if he would ever ever see his family again.

When he did make it home, the war came with him.

Rivera had joined the Army after high school in Buffalo. He was 18, at a point in life when he said he felt the need to get away. He and a buddy signed up together.

His friend changed his mind, but Rivera kept going. He met Alexis in Texas, just before his deployment. She was drawn to his energy, the way he rejoiced in life.

In many ways, he was a different person when he returned. Alexis said he struggled to rest at night and would sleep throughout the day. Doctors told him he was coping with intense depression.

"I isolated myself," he said.

The couple settled in Buffalo, where Rivera had grown up after arriving at kindergarten age, from Puerto Rico. Once he left the Army, he started a small photography business in the neighborhood, handling weddings and family parties, and he continued treatment for post-traumatic stress at the Veterans Affairs Medical Center.

He and Alexis have two sons, Jeliel and Emiliano, who are the center of their lives. Yet Rivera struggled to break out of what he describes as an emotional shell.

One day Calvert, with her flyers, walked into his life.

She was glad that Rivera and his family showed up at JFK. Calvert, a native of Texas, played soccer for the University at Buffalo. The Algonquin program is intended to teach children the game, while building community.

For Rivera, something clicked in the feeling, the energy, at the park. Before long, he was handling photography for the league. He seemed to know everyone, and Calvert liked the idea of someone raised in the city forging such deep connections.

He was hesitant. Rivera had never been an educator in any formal sense, and he still needed to fully learn the game. Calvert told him her organization could help. Rivera signed up for some training classes, and then began coaching a team of young children in the summer program.

A few years later, the results are evident. Rivera was showered with affection at last week's picnic.

"He's dedicated, hardworking and he's always here," said Carlos Costner, whose 10-year-old daughter Nylah played for Rivera. Many parents emphasized that point: In a neighborhood where stability and commitment can mean everything, children respond to someone who always puts them first.

"I love coach Teddy," said Alfreda Pinkston, whose grandson, Malachi Brazelton, also plays in the league. Pinkston said Rivera's gift is the way he sees the needs of every child he coaches, not only the stars but boys and girls who struggle or withdraw.

Already, Rivera stories are legendary around the league. There was the time he learned a few players on one of his teams had stolen some change from the desk of a teacher at their school. He took the children aside, brought them to the teacher, and had them apologize and return the money.

It came back to four principles he tries to uphold, as a coach: Show up, listen, have fun and be responsible.

Those rules, he told the children, do not end on a soccer field.

During a game one afternoon, a young player with anger problems clenched his fists and seemed ready to explode. A volunteer from SUNY Buffalo State ran out to intervene, but Rivera stopped him. The child, accustomed to the frustration of upset adults, saw it happen. He asked Rivera why he told the volunteer to wait.

"Because in life," Rivera said, gesturing at the city around them, "there won't always be someone to pull you back."

For that little boy, Rivera said, survival itself might depend on finding such restraint within himself. 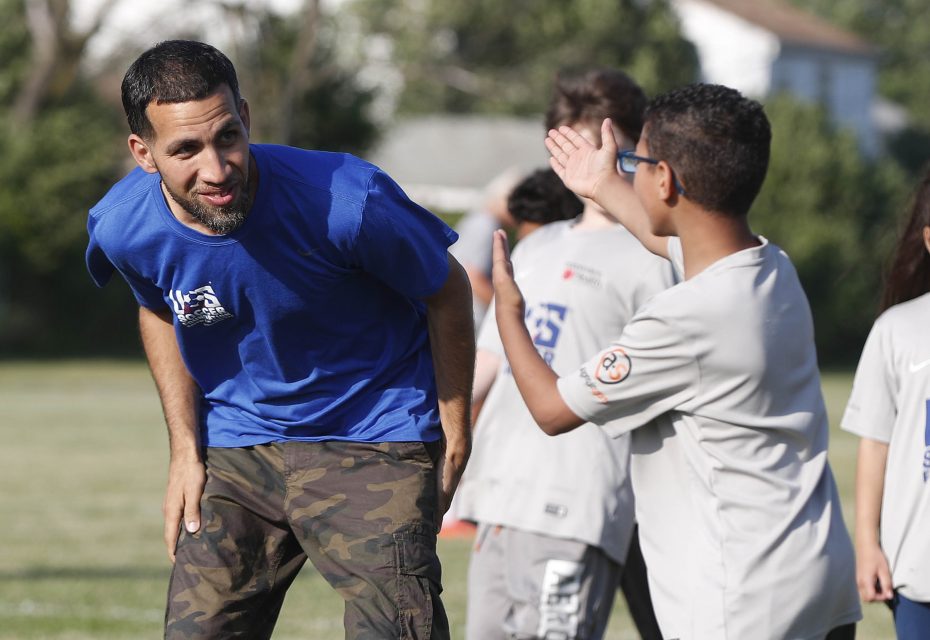 Through an AmeriCorps internship called "Operation Coach," overseen by Up2Us under the Algonquin umbrella, Rivera is now serving as site manager for the program. The eventual goal, Calvert said, is hiring him as a full-time recruitment, training and retention specialist.

All of it is astounding to Rivera. A few years ago, he saw himself as alone in trying to work through what he witnessed in Iraq. At JFK Park, a larger truth turned that despair upside-down: Hundreds of children find deep value in the way he sees the world.

He will be walking through Walmart or down an aisle at Tops, and he will sometimes hear the shouts of children before he even turns to see a face.

He is grateful. Before he realized it himself, they saw him for who he is.