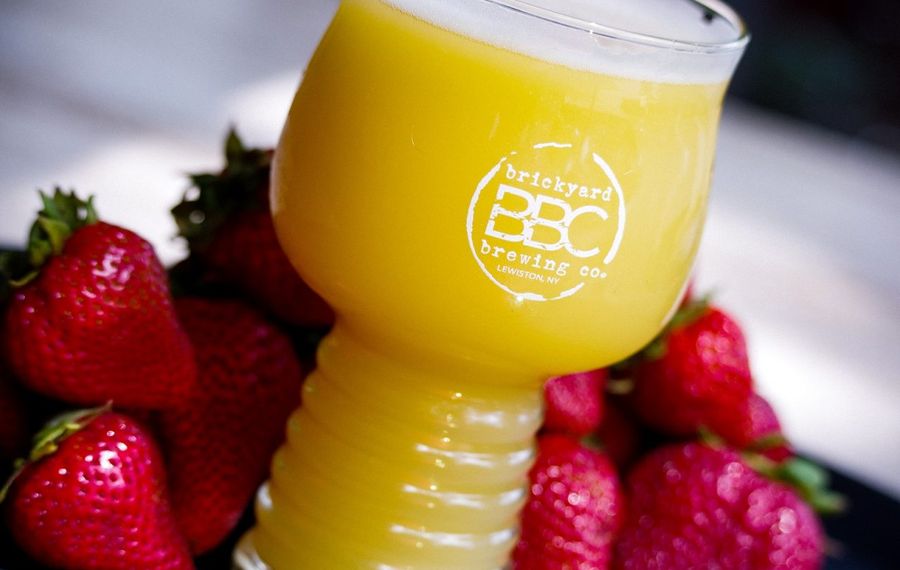 Brickyard Brewing Company (436 Center St., Lewiston) will release Millions of Strawberries, the latest in its “Millions of” line of beers, on July 6. The series is inspired by gelato and has featured beers such as Millions of Mangoes and Millions of Peaches in the past.

The latest version includes more than 120 pounds of Singer Farms strawberries, Madagascar vanilla beans and milk sugar for a creamy body and sweetness to balance hoppy character from Galaxy and Belma hops. Call 754-7227.

Tickets for this year’s Ballpark Brew Bash are now on sale. The festival is from 6 to 9 p.m. Sept. 21, a Friday (the event has usually been on a Saturday in the past), with VIP starting at 5:30 p.m.

This promotion is while supplies last; call your local Consumer’s Beverages with any inquiries.

[Related: Smiles from the 2017 Ballpark Brew Bash at Coca-Cola Field]

Famed vendor 'Conehead' gets his own beer at Buffalo Bisons games

The second beer, dubbed Haberstroh Mango Hefeweizen, is a traditional German wheat beer brewed with fresh mango, which adds to the light banana flavor given off by the German yeast. Call 608-6155.

The second beer is a raspberry wheat, a 5 percent ABV wheat beer made with Becker Farms’ homegrown tart raspberries, yielding a refreshing summer beer with a light sweetness. Call 772-2211.

Resurgence Brewing Company will host its next Kegs & Eggs event on July 29. This iteration will be a Staff Brew-Off, where all staff, administrators, brewers, sales team members and production crew workers will pair off and brew their own beers.

The beers will then be pitted head-to-head to see which is crowned the ultimate champion. Customers are invited to come try the crazy concoctions the Resurgence crew comes up with. Call 381-9868.

Pressure Drop has released its newest canned beer, Citra Screamer. The California golden ale clocks in at 4.9 percent ABV and is available in four packs of 16-ounce cans for $11.99. They are available at the Barrel Factory (65 Vandalia St.), and keep an eye out at local bottle shops as well. Call 541-1454.

Thin Man Brewery (492 Elmwood Ave.) will release several beers on July 7. The first two are a collaboration with Lough Gill and Industrial Arts, both brewed in Ireland. No Track Suits is a salted caramel imperial stout, and the other, Sligose, is a gose brewed with local oysters and sea salt.

Both beers will be available on draft as well as in cans to take home. The third beer is a new saison called Happy Little Accidents. Crisp and refreshing, the 6.5 percent beer was dry-hopped with Brewer’s Gold and Mittlefruh hops. Call 923-4100.