The stage was set for an epic Erie County Derby, the designation for the rivalry between National Premier Soccer League sides FC Buffalo and the Erie Commodores.

More than 700 fans rallied on a steamy night at All-High Stadium, anxious to see if the local amateur team could seize control of a playoff spot with just one game to play. There was no better opponent for this tilt than Erie, bitterly loathed - hence the FC Buffalo's supporters' hashtag #HateErie - almost as far back as the club's 2010 founding.

There was just one problem: FC Buffalo never came to play.

The Commodores thoroughly dismantled the Wolves in virtually every facet en route to a 4-0 win on Friday night, eliminating FC Buffalo from playoff contention in the process.

"The biggest key was we didn't come out with enough energy today," explained Wolves head coach Frank Butcher. "We let [Erie] get in on us, we failed to track back, and they outworked us from the start - we woke up for a bit, but at that point it was too late."

While neither Butcher nor fullback Austin Stout had answers immediately after the match, the consensus was largely that soccer can be a cruel game sometimes.

"From the beginning, we knew this was going to be an absolute battle, and I'll tip my hat to them - they took it to us today," a subdued Stout said. "It's just about competing; we might have been a step slow today for whatever reason. That's soccer sometimes, that's the way it goes."

The four-goal margin of defeat was FC Buffalo's biggest since the club's website recorded results (2014). Although a July 7 visit to cellar-dweller Greater Binghamton FC remains on the Wolves' league schedule, a win would take them to 20 points, one shy of Cleveland SC's present amount with two games remaining and three back of Erie, which also has two matches left.

[Watch: WNY Media aired the Erie-FC Buffalo game on its Facebook page, as it did for all home games]

*1-0, Erie, 12': Dominating possession from the onset, Erie struck first on a pretty goal. On the right wing, Kwame Opoku - who plays his college ball for St. Bonaventure - delivered a low pass to the edge of the 18-yard box to striker Jack Simpson, who laid the ball back to well-positioned Fernando Martinez with his first touch after a smart checking run.

Without a defender in his face, Martinez cranked a shot with his left foot to the opposite post; Jeremy Figler got a hand to the ball but not enough to keep it out. 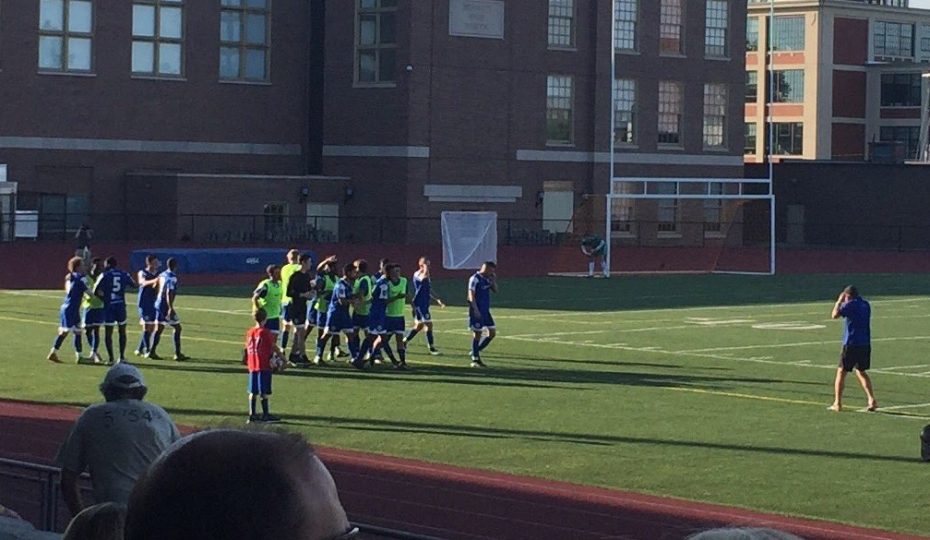 *2-0, Erie, 22': The Commodores doubled their lead 10 minutes later on a similar play. Opoku, who made a strong case for man of the match with two assists and an astounding number of tackles won, picked out the slippery Simpson in the box again.

This time, facing perpendicular to goal, Simpson passed the ball square to an unmarked Cam Philpot, who poked his first touch past Figler from 10 yards out. The marker gave Philpot, who enters his senior season for NCAA Division I USC Upstate, four goals in two games against the Wolves.

*3-0, Erie, 73': After brilliant build-up created the Commodores' first two goals, the third was a product of good fortune and hustle. As you can see in Nick Wojton's clip below, FC Buffalo center back Robert Williamson is a bit lazy in his pass back to Figler, and Simpson capitalizes by beating the goalkeeper to the ball and poking past him. This was the nail in the coffin.

*4-0, Erie, 77': FC Buffalo's Figler can feel hard done by the fourth goal, as hustle from Erie midfielder Craig Quinn freed him for a service from the right wing just before Chris Walter's tackle connected.

Substitute Jacob Alatorre careened toward the back post to receive the bending cross; the Cal State Bakersfield man's left-footed volley was denied acrobatically by a lunging Figler, but Alatorre followed his chance by nodding in the rebound from a narrow angle.

From the get-go, FC Buffalo seemed to lack a plan and a sense of urgency, with Erie sitting deep defensively to deal with long balls toward the Wolves' strikers but still possessing well with an extra man in the midfield. Butcher's team looked far different than the one that so confidently broke down the Rochester Lancers a week prior.

The home side had no answer for Simpson, a college teammate of FC Buffalo's Lewis White and Euan Bauld at Canadian collegiate national champion Cape Breton University, as the clever Kiwi thrived as a non-traditional lone striker. Martinez, largely invisible in the teams' first meeting, kept popping up with the ball at his feet in dangerous spaces.

While FC Buffalo midfielder Jake Cooper has been steady all season and Sammy Wasson has shown moments - even full matches - of brilliance, both were over-matched physically on Friday, with the latter replaced at halftime.

After a bright summer in 2017 with the Wolves, Southern Methodist-bound forward Akean Shackleford took a step back in both production and work off the ball after his second All-American recognition at Indian Hills Community College. Despite an inspiring backstory of achievement against great odds, Shackleford will have much to prove in his first season at the highest level of college play.

Earning his fourth yellow card of the season last weekend, FC Buffalo center back Bauld was suspended for Friday's match for card accumulation. Both Butcher and, to a lesser extent Stout, emphasized the Scot's absence.

"The tough part was being without Euan," Butcher said. "It's hard to play without your center backs, right? A guy who played every minute back there, so you start switching people into spots they're not necessarily used to."

Chris Walter deputized at center back and wasn't a liability, but Bauld's aerial ability and intelligent positioning - as well as his threat offensively from set pieces - were noticeably absent.

"[Bauld's] done a great job for us all year - it's a really difficult time to lose a guy who's played every minute; he's been a leader and kept us organized in the back," Stout added. "But obviously Chris has a ton of experience, filled in the role and did a heck of a job, so it's tough to say how much that really matters, but obviously we missed Euan."

Bayley Winkel, an FC Buffalo fan favorite who's among the club's more dynamic attackers, returned to action Friday after missing several games to a nagging ankle injury. The match did not go well, with Winkel providing little influence in his 54 minutes.

"[Bayley] hasn't been right all season - he tried to push through and fight through because that's who he is, but your mind can only outwork your body so much, and he tried to give it a go but it wasn't there for him the full season, basically," Butcher explained.

Easily missed over the course of the Wolves' seven-game unbeaten streak and two-game, late-season collapse was the steady contributions of Duquesne's Austin Stout, usually a winger who filled in at outside back for much of the campaign, giving FC Buffalo a two-way presence at a position of virtually no depth.

While it certainly ensured consistent minutes for Stout, the positional sacrifice was meaningful.

"Early in the season [the move] became something we needed, and with Lewis [White] going down with an injury," Stout said, "so I had to fill in a bit more. Whatever's required to help this team win, that's what I'll do."

"I feel like when we played the first time we had the better squad, and we had more guys available this time except for Euan. I tried to deflect the pressure a bit, so we said, 'Guys, if we play like we're capable of, we're going to come out with a win.'

"We just didn't have it today. I thought we prepared well, looking back, I'm not sure what we did wrong, but it just didn't work out for us today." - Frank Butcher, FC Buffalo head coach

Tickets for Fan Appreciation Day run for $7 presale here, $8 at the gate, with an autograph session with coaches and players available after the match.