Flora Miller Sliwa wanted to be heard, and she wasn't alone Saturday.

With a crowd estimated at 1,500 to 2,500 people marching alongside her, the Amherst woman walked down Delaware Avenue in Buffalo to demonstrate her anger over President Trump's immigration policies.

"People in power need to see how people in this country feel," Sliwa said. "It's a message the government needs to hear."

It was a message of vocal opposition to Trump's policy of separating immigrant children from their families, a message delivered in more than 750 cities across the country Saturday.

Filling all four corners of Delaware Avenue and Chippewa Street, where the offices of Immigration and Customs Enforcement are located, local protesters chanted, "No ban. No wall. Buffalo is for all."

"I'm not liking the direction we're heading in," said Debra McMahon of Hamburg. "I'm actually embarrassed to be a US. citizen because of how we treat our neighbors."

The demonstration, part of a national campaign, came a week after Trump retreated on his "zero tolerance" policy and signed an executive order he says will end the separation of families.

Organizers said the turnout far exceeded their expectations and pointed to the public uproar over Trump's policy of breaking up undocumented families.

Throughout the crowd, protesters, some of them immigrants, held signs that said, "Children are not criminals," and "It's 11 o'clock. Do you know where the children are?" 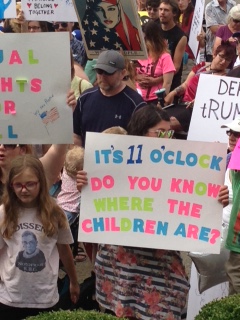 "There's a lot of energy because most people don't think taking children from their families is right," said Brian Brown-Cashdollar of the Western New York Council on Occupational Safety and Health, one of the groups involved in the protest.

Jordaan Houston and Karis Perry came from Rochester to take part in the demonstration and couldn't help but notice the turnout.

"We always think of ourselves as polarized," said Houston. "But when you see turnouts like this, you realize we all have a lot in common."

Eva Hassett, executive director of the International Institute of Buffalo, watched the crowd from the corner of Delaware and Chippewa and saw it as further proof that Buffalonians are welcoming and caring.

She also thinks the support for immigrants here stems from the community's long history as a destination for immigrants, dating back to the days when the Irish, Germans and Poles first arrived.

The demonstration in Buffalo, which included a march down Delaware Avenue that stretched more than three blocks, was part of the "Families Belong Together" campaign of protests throughout the country.