Michael Ginnitti found himself in the middle of a Bills Mafia social media storm one day in January.

Ginnitti is the co-founder and editor of Spotrac.com, the go-to website for sports contract information.

He was engaging in a Twitter exchange on the value of Pittsburgh star Le'Veon Bell when he tossed out the idea that Bills back LeSean McCoy isn't among the "value" players at the running back position.

"His $8.9 million cap hit is $2 million more than any other running back," Ginnitti tweeted.

It turns out McCoy followed Spotrac on Twitter, and he playfully responded: "Come on let me keep my lil coins sir."

About 14,000 fans retweeted McCoy's reaction, plenty of whom were Bills Mafia sticking up for Shady and taking umbrage at Ginnitti.

Come on let me keep my lil coins sir https://t.co/MCuJMlYzFe

"I wasn't saying they should cut him or trade him; I was just saying the way his money is weighted right now, he's a little bit heavy," Ginnitti said. "He's making more than maybe he should be for his age at this point in his career on a team that is building itself into a passing team."

Ginnitti could only dream of being the subject of a viral moment 11 years ago.

The Angola native and University at Buffalo graduate was an inconspicuous web developer in Orchard Park who started Spotrac in 2007 as a side hustle, a gig he dreamed up because he realized there was not one comprehensive site where fans could get full salary information on NFL player contracts.

When Ginnitti started, he was thrilled to see Spotrac mentioned on a message board. He was getting about 100 visitors to his site in a month.

These days, Spotrac gets almost 30 million hits a year and is widely viewed by fans and media as the most comprehensive source for salary data on the major pro sports.

On March 12, the soft start of the NFL's free-agency signing period, Spotrac had its biggest day ever – 1.7 million hits, Ginnitti said.

Ginnitti and his partner Scott Allen are living an entrepreneur's dream, making a living doing what they love to do. 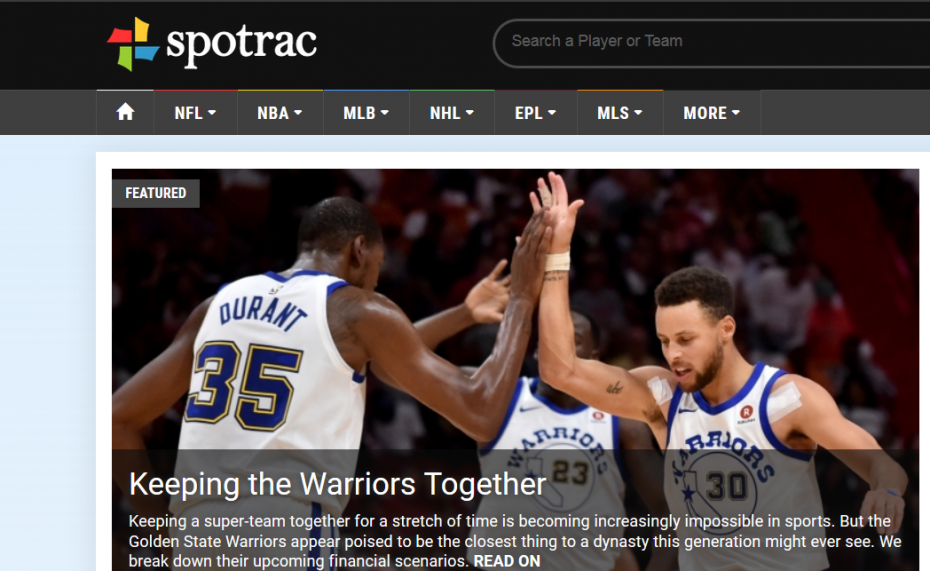 Spotrac is not a success just because it lists the information.

It is a user-friendly site that breaks down financial data a myriad of interesting ways. It includes all four major sports, although the NFL information is the key to its success.

"Whenever you have an NFL audience, things sort of work out," Ginnitti said. "That's going to be 75 percent of your traffic no matter what you do."

Want to know the top-paid NFL players in guaranteed money?

The players who have lost the most money in fines and suspensions this year:

The best value rosters in 2017 based on cap spending and production:

Ginnitti has bolstered his page views over the years by adding more and more data analysis. A big one is market values for all players, which is mostly accessed for upcoming free agents.

One of the first market value assessments Ginnitti did was when Bills defensive tackle Marcell Dareus was angling for the contract extension in the summer of 2015 that wound up being worth a total value of $96 million.

"I was like $1,000 off," Ginnitti said. "It was a nice one to start with, and it was maybe the worst one in Bills history. And it wasn't the money that was the problem; it was the structure."

Ginnitti considers it "a miracle they were able to get rid of him. The Bills did an A-plus job getting out from under that deal."

A current Bills example: Receiver Kelvin Benjamin is entering the final year of a deal that will pay him $8.4 million this year.

Ginnitti's partner, Allen, wrote an algorithm that analyzes player data and statistics and picks comparable players – for every player in the league.

"We can do this in real time," Ginnitti said. "So as games come in, player valuations automatically update based on performances every game."

However, Ginnitti said, he evaluates the comparisons and makes adjustments to the players being compared when necessary.

The biggest salary-structure problem Ginnitti sees for teams across all sports?

"Loving your players too much," he says. "That was a Sabres problem for a decade. They loved that core and the core wasn't getting them anywhere.

The antithesis, of course, is the New England Patriots. 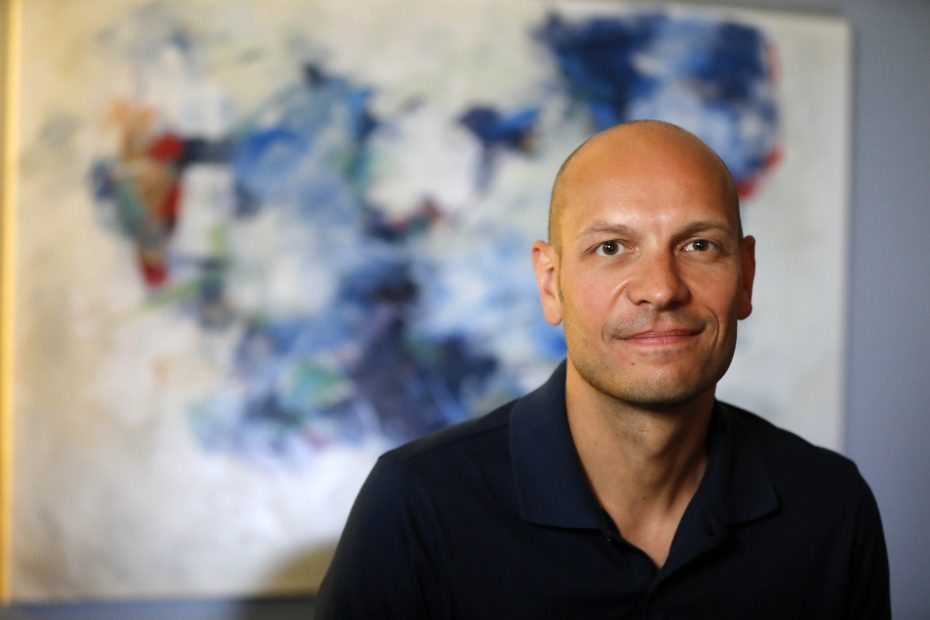 "Datawise, the NFL is the most complex sport," said Spotrac founder Michael Ginnitti. "The structure of the cap, the non-guaranteed contracts, all of it – it's two cups of coffee every day for me." (Mark Mulville/Buffalo News)

"They're phenomenal," he says. "Everything is short-term. Everyone is getting well paid; they're just not getting elite pay. That's the way to go. Pay nobody in the top 10, pay everybody in the top 15. Pay three guys instead of one. They've got six running backs instead of LeSean McCoy. Everybody's at $3 million to $4 million. Everybody's happy. Nobody's diva-happy. It's really smart."

Ginnitti, 38, was five years out of the University at Buffalo when he decided to start the website.

"It was the thing we all talked about at the bar," he said. "It was one of those metrics where I looked into it, and it existed in little pockets of the internet. It was deep in archived articles, things like that. Reporters weren't doing it as much 10, 15 years ago."

Developing relationships with agents and scouring media reports allowed him to build his contract database. He and Allen "smashed words together" to come up with the name – Spotrac – "the spot for sports contracts."

"The boom came when the NFL's 2011 lockout happened and the new CBA was signed," Ginnitti said. "People freaked out about what was going to happen. The new wage scale kicked in. People were talking contracts more than they ever have. We took advantage of that."

By the end of the 2011 season, Ginnitti said his traffic was close to 10,000 a month. In 2013 he quit his day job with a web-development company downtown. He still does web-development work for Western New York companies on the side, but he says Spotrac became a self-sustaining business for he and Allen in 2015.

Spotrac has NFL competition from the website Over the Cap, but that site does not handle the other major sports.

"What I like in Spotrac is he puts historical stuff in there," said Hall-of-Fame voter and ESPN analyst John Clayton. "It goes back before 2002. They also do good analytics-type predictions on what guys can get. They put comparables in there, and their comparables are good."

Ginnitti said about 75 percent of his revenue comes from advertisements with the rest from subscriptions, which cost $30 a year. Much of the salary data is free to access. Subscriptions provide past contract information, comparison data and advanced tools and metrics.

The site is invaluable for media, but the bulk of the followers are fans. It's especially popular with fantasy sports fans.

"For dynasty leagues and more advanced power-user fantasy players, they want to know who's got expiring contracts; that was a big draw for them," Ginnitti said.

Ginnitti said that while teams don't supply information, he has done some valuation work for teams.

"Some have said, internally this is what we think our player is worth and we're just getting into negotiations; we just want your take," he said.

"Our audience is interesting," Ginnitti said. "A couple of things I didn't see coming. Real estate people follow me in free-agent periods because they want to know who's coming to town. If Mario Williams is coming to town, I want to be the first guy in the door to get him a house in Hamburg. Financial investors and financial managers follow. There's even a following of women who want to know who's single and who's making what."

Ginnitti spends part of every day keeping up with the roster moves in every sport. The data is ever-changing.

McCoy, for instance, no longer has the biggest running-back cap hit.

Pittsburgh's Bell, playing under the franchise tag, has a hit of $14.5 million this year. San Francisco's Jerick McKinnon, signed to a four-year, $30 million contract in March, has a $10.5 million hit.

"Datawise, the NFL is the most complex sport," Ginnitti said. "The structure of the cap, the non-guaranteed contracts, all of it – it's two cups of coffee every day for me."