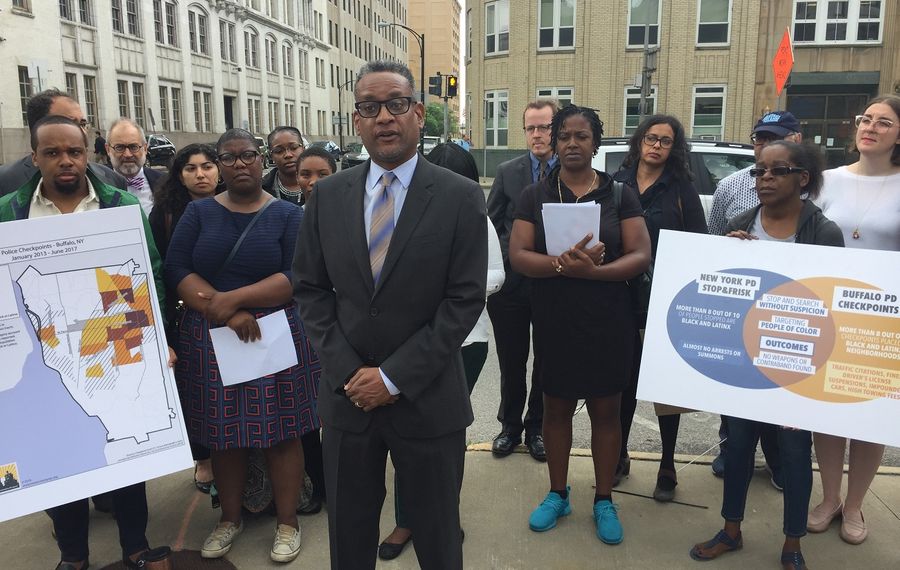 The Buffalo Police Department discriminated against people of color through traffic enforcement practices, including checkpoints that targeted neighborhoods where the majority of residents are black or Latino, according to allegations contained in a federal civil rights lawsuit filed Thursday.

The lawsuit against the City of Buffalo was filed by the Center for Constitutional Rights, the National Center for Law and Economic Justice and the Western New York Law Center. The plaintiffs are the local organization Black Love Resists in the Rust along with four individuals who say they have been harmed by the police department's actions.

In the suit, based on data obtained from the police department, the groups assert that more than 85 percent of traffic checkpoints took place in neighborhoods made up predominantly of black or Latino residents.

Almost 40 percent of traffic checkpoints were conducted in three of the city's 77 census tracts, each of which have a population of black or Latino residents that exceeds 86 percent, according to the lawsuit.

The lawsuit also alleges the city used the checkpoints as a revenue-generation strategy "to harvest revenue from poor, Black and Latino residents."

"We are here today because black and Latino people in Buffalo are tired," said Vincent Warren, executive director of the Center for Constitutional Rights, the New York City-based group that filed a civil rights lawsuit over the New York City Police Department's "stop and frisk" practices. "What are they tired of? They're tired of the Buffalo Police Department's checkpoints that have been cordoning off black and brown neighborhoods here in Buffalo and extracting money by charging people with all sorts of tickets."

In October, two of the groups behind this lawsuit said they were suing the Buffalo Police Department over access to data on the checkpoints. Because of that suit, they were able to obtain the data on which the new lawsuit is based, said Claudia Wilner, senior attorney for the National Center for Law and Economic Justice.

The plaintiffs and the attorneys handling the case held a news conference to announce the lawsuit Thursday morning across the street from Buffalo Police headquarters. The individual plaintiffs are Buffalo residents Dorethea Franklin, Taniqua Simmons, De'Jon Hall and a fourth plaintiff identified in court papers as Jane Doe.

Taniqua Simmons, one of the plaintiffs #Buffalo pic.twitter.com/gMx4iOxXg8

A spokesman for the city and the police department could not immediately be reached for comment. In September, Franklin filed a separate civil rights lawsuit against the police department involving the traffic checkpoints. At that time, mayoral and police spokesman Michael J. DeGeorge said that "any allegation of discrimination is completely false."

The police department says it no longer undertakes the traffic checkpoints and announced in February it was disbanding its Strike Force unit, which conducted the checkpoints in areas the department determined were crime hot spots.

In addition to monetary damages, the plaintiffs also are asking for a judge to order the department to refrain from improper use of traffic checkpoints.

Complaint - Black Love Resists in the Rust v. City of Buffalo by AaronBesecker on Scribd