Buffalo Diocese Bishop Richard J. Malone put four more priests on leave due to complaints of sexual abuse, said allegations against three other priests were substantiated and exonerated a fourth priest who had been suspended in March.

A diocesan investigation determined that the allegations against the Rev. Dennis G. Riter, pastor of St. Elizabeth Ann Seton Church in Dunkirk, have not been substantiated. Riter has been returned to active ministry and likely will celebrate Masses in the parish this weekend.

Removed from active ministry this week were four retired priests who assist at area parishes: the Rev. Pascal D. Ipolito, the Rev. Daniel J. Palys, the Rev. Roy Herberger and the Rev. Robert A. Stolinski.

The four priests were put on administrative leave "for the purpose of investigation" and the leave "does not imply that any determination has been made as to the truth or falsity of the complaint," the diocese said in a news release.

Herberger in a letter this week vehemently denied the allegations against him.

The new complaints further intensified a growing scandal within the Buffalo Diocese, which has been rocked since late February by victim accounts of sexual abuse by clergy. 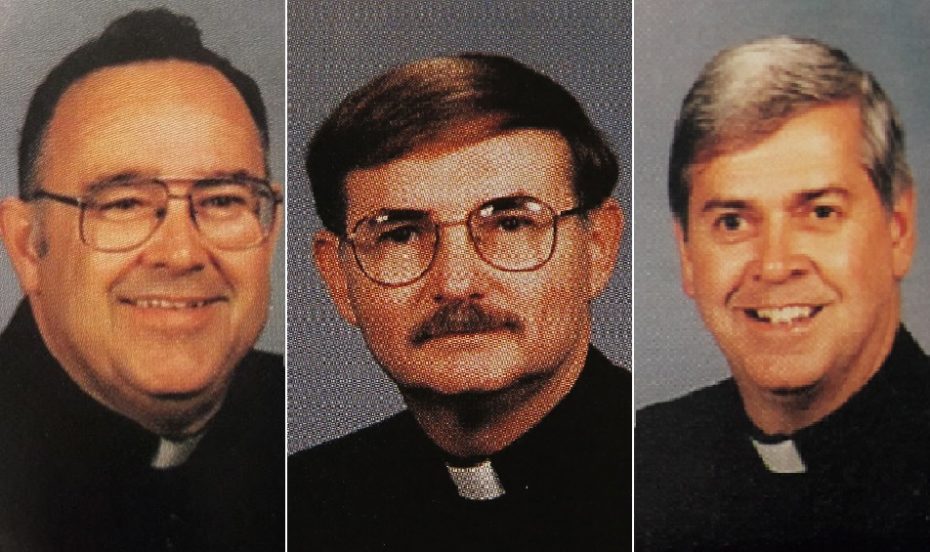 From left, the Rev. Samuel Venne, the Rev. Dennis Fronczak and the Rev. Arthur Smith. (Photos courtesy of the Diocese of Buffalo’s 1995 Priests’ Pictorial Directory)

Allegations of  sexual misconduct allegations against three other priests have been substantiated after an investigation, the diocese announced. Those priests are the Rev. Samuel J. Venne, the Rev. Arthur J. Smith and the Rev. Dennis A. Fronczak.

They will remain on administrative leave while the results of a diocesan investigation are reviewed by an office of the Vatican called the Congregation for the Doctrine of the Faith, which will make a final determination.

The diocese's announcement late Thursday afternoon followed a meeting a day earlier of the Diocesan Review Board. Scott F. Riordan, a former assistant district attorney hired by the diocese to investigate abuse claims, presented a report to the board on his probe into allegations against Riter, Venne and Smith.

Dennis C. Vacco, a former state attorney general and U.S. attorney who is now in private practice, investigated the allegations against Fronczak. Vacco's report was reviewed by the board at a previous meeting.

The board then made recommendations to Malone.

Malone has not made a further determination yet on the credibility of complaints against two other priests who were put on administrative leave more recently, the Rev. Fabian J. Maryanski and the Rev. Mark Wolski.

The diocese on Thursday notified parishes where Ipolito, Palys, Herberger and Stolinski had been celebrating Masses or otherwise assisting, as well as parishes where they previously served as full-time pastors.

In March, Malone launched a new program to offer monetary settlements to childhood victims of clergy sexual abuse. The deadline to apply to the program was June 1.

When asked in a recent interview whether he thought the program would lead to more allegations against priests, Malone responded: "I don't have any sense that that's about to happen. It could happen. If it does, we'll deal with it as well as we can. If there are people out there who have been abused by a cleric or another member of the church's ministry, we want them to come forth. We really do."