When Gelateria Luca, Elmwood Village's gelato maker, closed a couple of years ago, friends mourned its passing. "Why can't we have nice things?" one moaned, offering the traditional elegy for regretful restaurant-goers.

Late last year, though, Rin Thai Bistro opened in the space, with veteran Thai restaurateur Rin Suphankomut offering a pared-down menu of Thai standards along with a rotating list of specials, including Thai dishes seldom, if ever, spotted in the area.

The place is built around an open kitchen, making the wok action part of the décor. The roar of its blowtorch burners adds to the soundtrack, along with the clang of the cook's tools. The scents of toasted garlic and sweet soy caramel are soothing aromatherapy, especially on wintry nights.

The food? Pretty darn good. Top it off with a personable, detail-obsessed owner on the floor, eager to share new exotica with willing customers, and I'd say Elmwood made out on the trade. 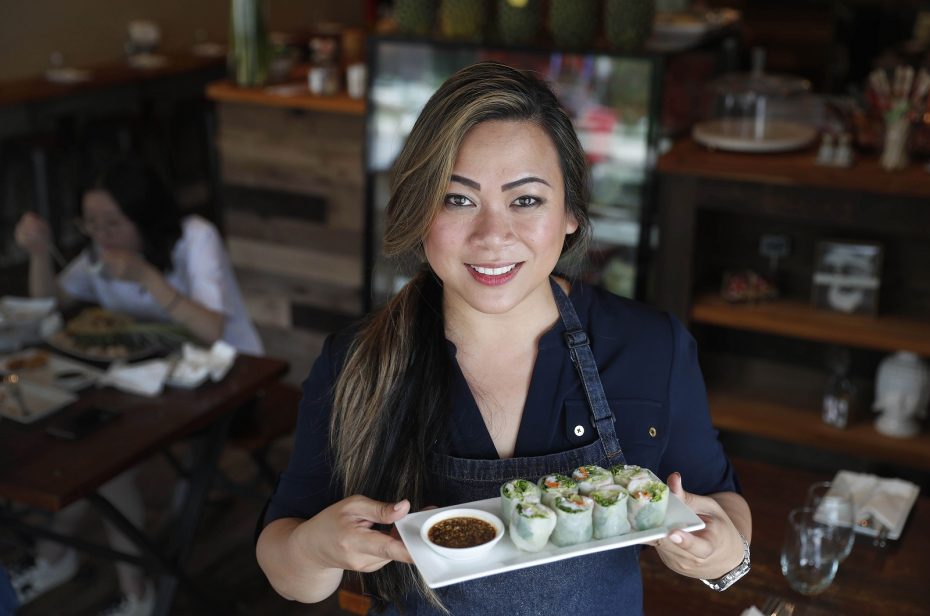 Suphankomut helped run King and I on Kensington Avenue until 2016. At her new place, she wanted to move from the standard area Thai format to more rustic dishes she had grown up on in Thailand. Bar seats face the kitchen and wood-lined walls and counters nod in the direction of a roadside snack shack. There are no menus, but a chalkboard lists available offerings.

You could fill an encyclopedia with Thai dishes that aren't represented around here, so it's refreshing to find a restaurateur willing to gamble on giving Buffalonians new choices. That said, Suphankomut isn’t starting out too far afield.

Consider moo ping kow neauw ($13), fat skewers of marinated pork, grilled and served with warm sticky rice and dipping sauce. It's just grilled meat, but it's beyond the usual chicken satay, and more enjoyable, too. The garlicky pork has some fat so it cooks up crispy-tender as the coconut marinade caramelizes. A chunk of meat with a bite of faintly sweet rice adds bulk and starch, like cheese with bread. Then there's the dip, a tamarind-based sauce with sour fruitiness that's a welcome break from the usual sweetened fish sauce.

When Suphankomut tells you it's one of Thailand's most popular street hawker offerings, it's easy to understand why. Her chicken satay ($8) is one of the better versions around, three well-seasoned tenders grilled judiciously so they remained tender, not halfway to jerky. They're served with a little cucumber-onion-peanut salad as well as the standard peanut-coconut sauce.

Fiery udon with chicken ($15) was a saucy stir-fry with scallions, carrots, red bell pepper and zucchini that was plenty flavorful but didn’t live up to the hype, barely leaving a singe. It would bother the chile-avoidant, but I wouldn't expect much more than a smolder for most diners. The chicken breast slices were chewy, as is usually the case. 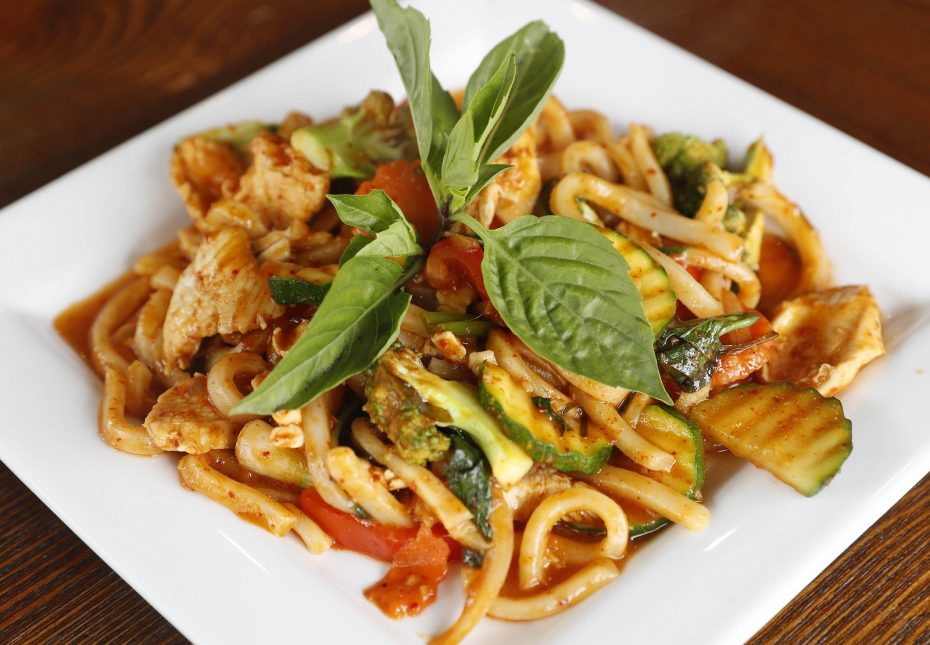 Chicken wings come coated in sticky-sweet Asian chile glaze or a dry dusting of garlic powder and white pepper. I much preferred the latter, their crispy characteristics emphasized by the breath of the wok, and the smoky character of white pepper.

Mango salad ($8) drew me in with perfectly ripe mango, tossed with red pepper, red onion and scallion in a lime dressing, then zapped me with a jolt of chile heat, and I enjoyed the ride. 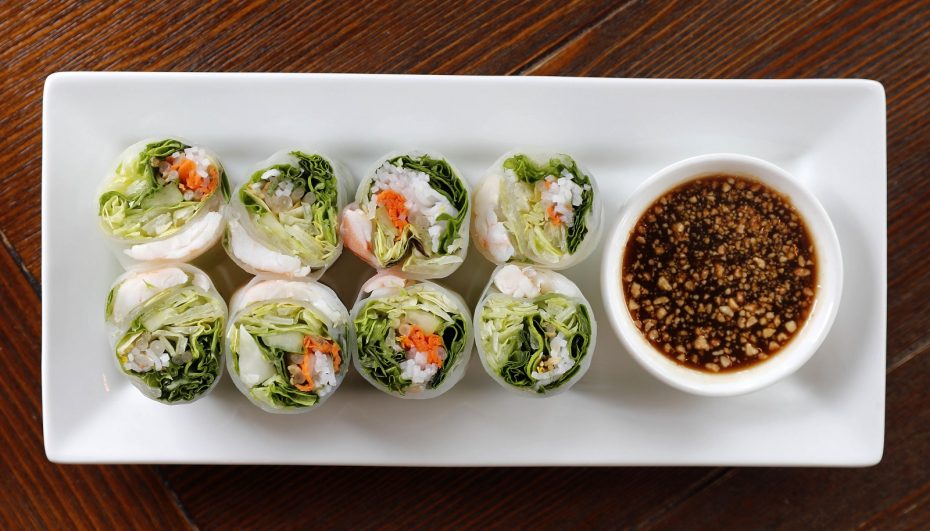 Pad Thai ($14 chicken, $17 shrimp), the ubiquitous Thai noodle dish, escaped cliché with a light sauce with vinegar and lime juice instead of the usual Kool-Aid-sweet versions, and fresh rice noodles, for a springier pasta experience. Scrambled egg and sliced chicken or shrimp complete the dish, with a topknot of fresh bean sprouts.

Pud gra pow pork ($14) was a lively mélange of ground pork, snap peas, onions and red bell pepper in a thin brown sauce suffused with the licorice-like fragrance of Thai basil. Pud see ew ($15 chicken, $18 shrimp), wide rice noodles and vegetables like broccoli and carrots stir-fried with sweet soy, could have used more time in the wok to develop its flavor.

Coconut milk soup with lime (tom kha) and hot and sour (tom yum) soups were both worthy. Tom kha is a balancing act between velvety rich coconut, acidic lime juice and aromatics like lime leaf and cilantro. This version let each speak, while hiding mushrooms and red onion in its depths. 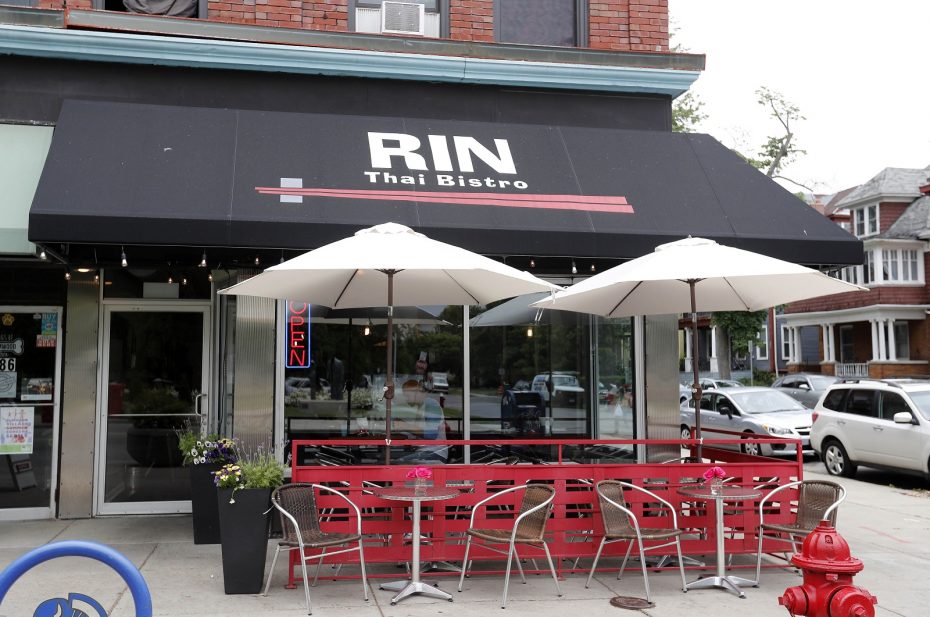 Tom yum's clear broth, suffused with lemongrass, ginger-like galangal and lime juice, had a rousing chile oil topnote that made its sourness even more racy, with tomatoes and scallions in support. Both can be augmented with chicken ($5) or shrimp ($7) if desired.

Pineapple fried rice ($17 chicken, $20 shrimp), was another solid version of a standard. Rice with a wisp of smoke was tossed with onions, peppers and cashews, egg and red onion, sweet chunks of fresh pineapple, and a sprinkle of dried shallots.

Rin Thai Bistro' smaller menu offers bigger Thai flavors than competitors. Its prices are bigger, too. But if you value Thai thrills, especially in the heart of the Elmwood Village, Rin Thai gives you a chance to put your money where your mouth is.