Preservationists accused the plan of denigrating the Buffalo-born Bunshaft's work and robbing the 1962 addition of its architectural integrity. Monday's announcement of a new design was intended to remedy that by leaving the Bunshaft building largely intact.

But the new design by Shohei Shigematsu, of the international firm OMA, had a number of other things to accomplish:

• First and foremost was dramatically expanding exhibition space through the addition of one or more buildings, and improving the logistics for moving priceless art in and out of the 113-year-old space, which often requires use of a crane.

• Restoring 2 acres of green space and burying the parking lot was a priority. So, too, was creating a sense of transparency across the campus and transforming the Bunshaft sculpture garden into an airy, communal expanse as a gathering spot and walk-through to Olmsted's Delaware Park.

• Another part of the plan for the nation's sixth oldest art museum: Reestablishing the 1905 E.B. Green building's long-ago-demolished west staircase.

• Finally, it all had to be done in an artistically and aesthetically pleasing way, as subjective as that can be.

"My overall feeling is that this is a much better direction," said Michael Tunkey, an architect and principal of the Grand Island-based firm Cannon Design.

"I think the No. 1 thing it does is it resolves the site very well by creating more of a quad or campus, as opposed to the previous scheme that was really about a building on top of a building," Tunkey said. "From an art perspective and community perspective, I also think it works very well because it allows the three major buildings on the site to have separate functions that work together as a whole, the way you would expect a great campus to work."

One disadvantage: The former design would have created a more dense campus that simplified circulation and required less walking to see the great works of art, Tunkey said. But doing so would have come at "a huge expense," he said, that canceled out its benefits.

Art collector and educator Gerald Mead also thinks the new design is right on the mark.

"I was there at the presentation, and the continual thought that came to my head was, that they got it right," Mead said.

"I think what was needed was a third standalone building," he said. "I was particularly impressed by the way they likened the complex of all three buildings to an academic campus. The third building creates a signature 21st century architectural work."

Mead said he's glad the courtyard space, as in the earlier plan, will continue to be a public space and conduit between the Olmsted park and Elmwood Avenue. He's also relieved that the height and location of the new building won't affect the classic view from Hoyt Lake toward the Albright-Knox.

Bridge to the future

The plan calls for a translucent building on the northwest side of the museum grounds, with a wraparound promenade on the second level and three floors for viewing. The 6,000-square-foot open-air sculpture garden in the 1962 building would be covered and opened to the public to serve as an "indoor public square," with an entrance added on the east side of the building.

A new concept for the Albright-Knox Art Gallery's expansion features a ziggurat-shaped building on the northwest side of the campus.

A curvy transparent bridge would connect the new north building to the neoclassical 1905 building. The west staircase would also be recreated at that building.

Altogether, there will be 48,000 square feet of state-of-the-art exhibition space in the new building and through renovating existing buildings – which will double the amount of prime viewing space.

An education wing with classrooms and work spaces is planned in the Bunshaft building.

Details to be determined over the next seven months, during the next design phase, will be critical, Director Janne Sirén said.

"With each phase the design becomes more articulated and the changes more nuanced," he said.

Buffalo preservation architect Barbara Campagna sees benefits in the new design, but she prefers to reserve judgment until the plan is further along.

"It appears to be much better than what they started out with," said Campagna, who opposed the earlier design for its impact on the Bunshaft building.

Campagna likes the location of the new building and the creation of a campus that looks toward Elmwood Avenue. But she thinks more work needs to be done to address the relationship between the 1905 and 1962 buildings.

Campagna is also not keen on the renderings she's seen for the proposed north building.

"The design of the new building is so cartoonish it's hard to even comment on it," Campagna said. "I just hope it winds up being the right design."

Her biggest complaint? A lack of transparency by the Buffalo Fine Arts Academy, noting there wasn't a single public meeting to discuss the current design before the board unanimously approved it Monday.

"They just presented this as a fait accompli," Campagna said.

Art consultant Joanna Gillespie liked the first design, but she likes this one, too. She was particularly struck by the museum's accessibility.

"It seems to convey an openness and a kind of access that's encouraging, especially for an institution that is often criticized for exclusivity or loftiness," Gillespie said. "The scenic bridge seems a little corny, but I appreciate what the architect is trying to do and am willing to trust his vision on that because I think he's pretty brilliant."

Gillespie is glad to see the courtyard would still be used as a public space and is intrigued by the new building.

"I think having this giant ziggurat on the north end of the campus is a much more bold statement," Gillespie said. "That makes the project more exciting."

Gwen Howard, chairwoman of the Buffalo Preservation Board, and Stephanie Crockatt, executive director of the Buffalo Olmsted Parks Conservancy, both expressed support for the new plan.

The expansion – which the gallery refers to as "AK360" – is consistent with the Albright-Knox's 10-year strategic plan, "Connecting Art, Ideas and People," which came out two years ago. AK360 refers to the goals of integrating the campus with the Olmsted park and creating "a more inclusive museum that's physically and philosophically accessible to all members of our community."

Board President Alice Jacobs said it was vital for the expansion to be fully aligned with the gallery's strategic plan and its goal of accessibility.

"We want a beautiful building and an architectural icon for Buffalo, and we want to respect the past, but ultimately it's about how we achieve our vision for the future," Jacobs said.

Sirén said the expansion seeks to break down the geographic wall that exists between the museum and the park, and to make the campus more inviting. One-third of the space will be usable without buying an admission ticket, from the courtyard and the green plaza to entrance into the Bunshaft building, he said.

"This kind of gesture is something that evokes a period in our past when that kind of accessibility barrier didn't exist," Sirén said. "We are embracing that part of the legacy in our vision for the future."

This marks the third expansion for the museum, with each having occurred roughly 60 years apart. After an expansion design was unveiled in June to an enthusiastic reception at the Buffalo Niagara Convention Center, criticism over the Bunshaft building led back to the drawing board.

Sirén said the new proposal is better for it.

"What we did was look at those salient key features of the initial proposal and ask the question: How can we achieve those objectives at the same time as we salute the legacy of historic architecture?" Sirén said.

"We have a stronger architectural proposal than we did a year ago. I mean that sincerely," he said. "Architecture is an iterative process. The way you arrive at a good solution is through experimentation. Sometimes that can seem tumultuous, but that brainstorming is a fundamentally important part in an architectural planning process."

Sirén said it was important that the education wing, cross-park access and the public courtyard are preserved.

"My one concern would be that it's more ambitious," Sirén said of the new design. "It has more independent components, and therefore as we work to align the architectural program with the project budget, I'm very curious how  that will unfold."

A key feature of the changes to come will be the ability to move art safely in and out of the campus through the north building. The proposed bridge, with industry standard 12-foot-by-12-foot dimensions for transporting art, would connect into the 1905 building.

"We won't have to crane things in anymore," he said. 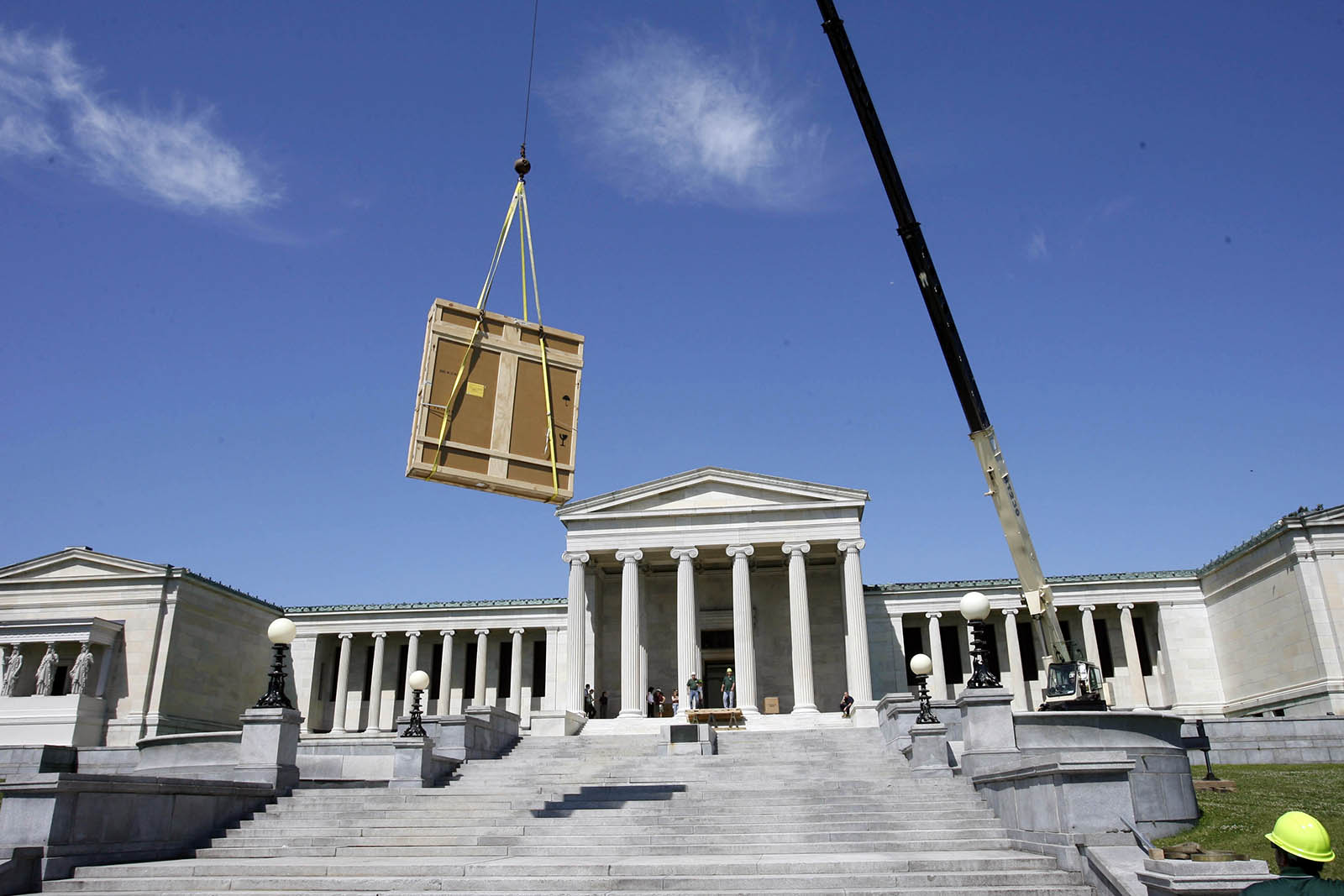 Workers use a crane to lift large crates into the back entrance of the Albright-Knox in 2009. (Derek Gee/News file photo)

The other essential change will be the ability to drastically increase the number of artworks on view.

Sirén said there will always be a selection of Albright-Knox's most beloved masterpieces on view, whether they're by Clyfford Still, Marisol or Jackson Pollock. But the number of works on display in the gallery when there's a major exhibition will now increase from the current 75 to 125 to several hundred.

There will also be more opportunities to do shows on mid-career artists and larger, special exhibitions, Sirén said.

The expansion cost, along with a boost to the gallery's operating endowment, has been pegged at $155 million.

About one-third of the money is projected to come from Jeffrey E. Gundlach, a Western New York native and Los Angeles-based bond trader who has committed $52.5 million, including community matching grants still to be reached.

Gundlach's name will adorn the building when it is scheduled to open in 2021 as the Buffalo Albright-Knox-Gundlach Art Museum.

Gundlach, in a statement, said he "could not be more enthusiastic" about the design. "With sensitivity, beauty and practicality, OMA's design creates a unified campus literally bridging great eras of the City of Buffalo," he said.

As the planning process moves forward, so, too, does fundraising.

Sirén said he hopes more individuals and families beyond the 195 who have given so far will step forward and contribute to the transformation coming to Buffalo's most celebrated cultural institution.