A longtime area concert promoter and a veteran restaurateur are pooling their passions and talents together as co-owners of a new downtown music club and event space.

Chris Ring of After Dark Entertainment and former owner of the Waiting Room music venue, and Dale Segal, formerly of O Restaurant and Encore, will open Rec Room at 79 W. Chippewa St. The building most recently housed the Lodge bar and restaurant.

The club will have its grand opening in mid-September when the regular schedule will include concerts early in the week and bar activity on Friday (with Live Band Karaoke) and Saturday (Club Night with DJs). Music fans can get a sneak peek in August, when the club opens on two nights for concerts by the metalcore band For The Fallen Dreams on Aug. 8 and Mixtape Reunion on Aug. 24.

Though the musical lineup will have similarities to the Waiting Room, Rec Room's intimate 300-person capacity will be the right size for performances by up-and-coming groups, niche bands and reunion tours. Ring said to expect an expanded variety of genres including EDM, pop and rock, with special events like a night of comedy and Q&A with wrestler Jake the Snake Roberts on Sept. 14. Like the Waiting Room, the majority of concerts will continue to be all-ages. “It’s important to do shows for the kids,” Ring said, adding the weekday concerts will run from about 6 to 10:30 p.m. so the younger crowd is out of the club before the late-night scene starts.

The 6,000-square-foot venue will have a bar on each of its two floors. Bands and other performances will be downstairs on what Ring calls one of the club’s top draws: the nontraditional placement of the stage in the front of the club, as found in cities like Nashville and Austin. Adding to the unique atmosphere is the placement of the stage in front of large garage doors, which can be opened to Chippewa Street.

“We’ll raise the doors and get the foot traffic from hotels and other businesses. We’ll have something different to offer them,” Ring said.

In keeping with the club’s name, the second floor will house plenty of recreational activities including video games and shuffleboard. Televisions will broadcast sporting events and the downstairs concerts for those who want to see the band, but get away from the crush by the stage.

Though it won’t have a full-service restaurant, “snacking bar food” like tacos, nachos and sliders will be available. The new owners plan to utilize the club’s full kitchen with “pop-up shop” food service by inviting friends who have businesses in the Northtowns and Southtowns to come in and cook on a rotating basis. “We’d like to showcase our friends and turn people on to some places they might not know. We may have some food trucks come in, too,” Ring said. “We’ll keep the lineup fresh. Customers won’t know what food we’ll have until they get there.”

With concerts early in the week – touring bands usually play Buffalo between larger weekend gigs in nearby Toronto and New York City – Ring said he hopes that will mean more business for neighboring bars and restaurants from people wanting to eat or drink before the show.

“We want to have deals with restaurants and bars and the hotels to offer coupons and specials. We’re hoping to bring lots of traffic to Chippewa,” he said.

The collaboration between Ring and Segal, who are old friends, seemed natural to them once they started talking. “Dale has had tremendous success in the bar and restaurant business over the years. He has always thrown great events and is one of the best in the business at making sure his customers have an amazing experience which is really important to me. Partnering with him on this project was a no-brainer,” Ring said.

A long-term plan for the Rec Room is to host outdoor street festivals and concerts with stages at each end of Chippewa Street, which would be closed to traffic during the event. 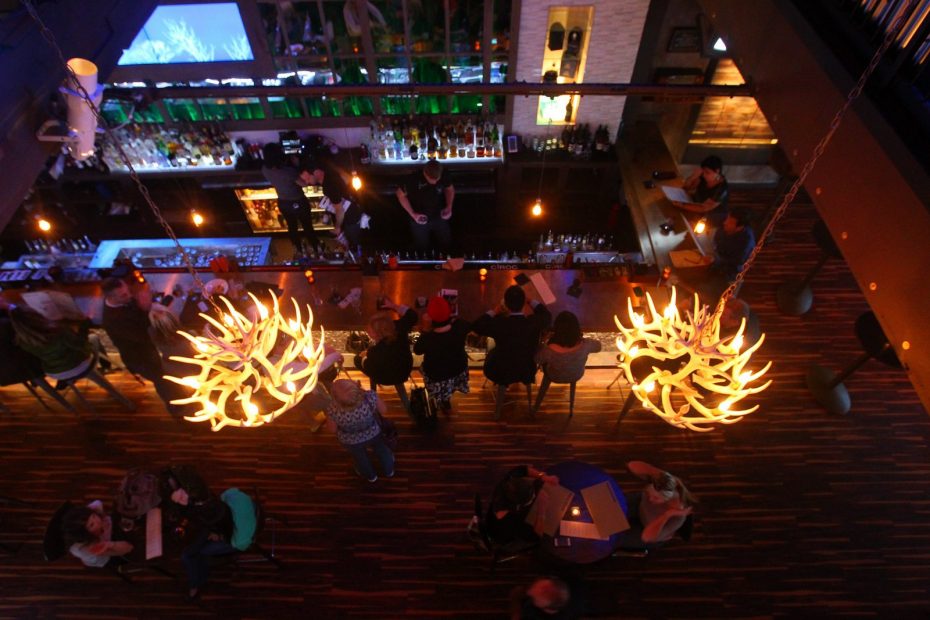 This is the view from the second floor of the former Lodge. The venue will be open in September as the music club Rec Room. (John Hickey/News file photo)

Here is the initial slate of concerts that have been announced. Ticket information is still to come on some shows. Tickets can be bought at afterdarkpresents.com, charge by phone at 893-2900 and at the After Dark offices (630 Elmwood Ave.). Visit RecRoomBuffalo.com.

Here is the initial concert schedule:

Aug. 8: For The Fallen Dreams with Sworn In, Prison, Bodysnatcher and Bungler. Tickets are $15 advance, $17 at the door and are on sale now.

Sept. 14: A night of comedy and Q&A with the legendary Jake The Snake Roberts