U.S. Consul General Juan A. Alsace will tell you Istanbul, Barcelona and some other cities he’s lived in are some of Earth’s most amazing places.

After all, the Buffalo native is a diplomat.

When it came time for Alsace to choose where he’d settle down after retiring from a 32-year career in foreign service this month, he chose to stay in the Great Lakes.

He and his wife, Nancy, an adult nurse practitioner, were shopping for a home in Milwaukee this week.

“We have family and many friends there,” Alsace said.

Alsace is a Marquette University graduate. It’s also where he met Nancy.

Along those Lake Michigan shores is where Alsace said he can best continue advancing water issues in the Great Lakes.

“I hope to become a Waterkeeper,” Alsace said. 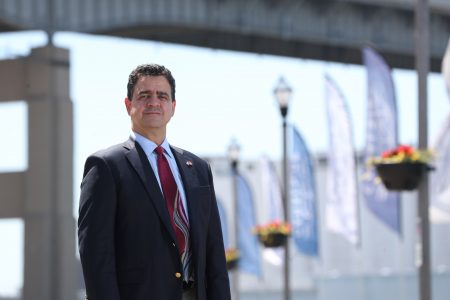 Alsace, who was in Buffalo last week, said his passion for water issues sprang from his childhood roots in Buffalo on and around Lake Erie.

“My family and I, for example, would go over to Crystal Beach back when it had its small amusement park,” Alsace said. “And growing up in the West Side, it was common to picnic in Front Park.”

The son of immigrants from the Dominican Republic, Alsace was educated in Buffalo Public Schools on the West Side and in North Buffalo and attended Mount Carmel Preparatory School in Niagara Falls, Ont.

Alsace's passions percolated again in 2003 when he was a student at the National War College.

“I wrote a paper on how the U.S. government developed its interagency approach to dealing with water issues, both internally and abroad,” Alsace said. “It intrigued me then and now, as a diplomat, because history shows the importance of peoples and nations cooperating on water, a resource vital to all of us."

Serving in Toronto provided a unique opportunity for Alsace to substantively engage on water issues.

Great Lakes protection was Alsace’s favored cause in an embassy charged with forging and building U.S. and Canadian relationships.

And, with 30 million U.S. and Canadian residents living around the Great Lakes, Alsace said it's not surprising much of binational efforts between the two nations would be concentrated here.

"The lakes have contributed to – and continue to play – a critical role in the economic well-being of our two nations through the transport of goods, fisheries and tourism," Alsace said. "The lakes are job creators, so keeping the waters clean and healthy makes economic sense as well."

Alsace said he's confident that work brokered through the U.S. Consulate in Toronto will be carried forward following his departure.