Buffalo Police warned about the dangers of the swift-moving Niagara River after two men drowned Monday afternoon in the waters off Broderick Park, Buffalo Police said.

A witness said they were trying to salvage a piece of driftwood.

Police Capt. Jeff Rinaldo said that one of the men was 46 years old and the other was 29. Their names were not immediately released.

Buffalo Police's Underwater Recovery Team responded to a call at 4:37 p.m. of two people in the water at the foot of West Ferry Street. About an hour later, police pulled two bodies from the river near the Broderick Park concession stand.

The incident took place near where Buffalo Police Lt. Craig Lehner went into the water and disappeared during a training exercise last October. His body was recovered five days later.

“As we saw last year, unfortunately, in the tragedy, even experienced divers can die in these waters," Rinaldo said at a news conference at the scene. "This is not something to be taken lightly, and although something is sitting on top of the water and it looks nice and calm, it is not calm water. There’s different currents, especially when you get into the eddies. There is something in these waters that will pull you toward the water and then suck you out into the river, as well as pull you down. It’s not safe under any type of circumstances.”

Rinaldo added that the area is posted with signs warning of swift water and saying that swimming is not allowed.

An eyewitness told The Buffalo News that the two men were attempting to collect a piece of driftwood lodged in an eddy near a point where people can easily enter the water.

Christine Williams, of the City of Tonawanda, who was walking in the area with her mother, Margie Benevento, of North Tonawanda, and her children, Beckam, 10; and Emberlin, 7, said: "There was a man standing on the opposite side of the gate and my daughter said, ‘What is he doing?’ The man said he was going for a swim. Then he proceeded to say he collects driftwood and makes furniture out of it. It sounds like he did this often.

"That’s when another man approached him, wearing just Adidas pants, no shirt and no shoes. They must have known each other in some capacity because he said, ‘I’ll jump in and get it for you.’ He put a rope around his wrist so the (other) man could jump in.

“From the second he jumped in, it was obvious he was a really bad swimmer. He was smacking the water quickly and he was fatigued very fast. He swam only about 4 or 5 feet and came back to the rock so he could catch his breath.

"He swam out, he still had the rope around his wrist. He was about 5 feet from the driftwood. The guy holding on to the rope just let it go, assuming he could go out and bring it back.”

“People kept telling the guy (on shore) that he needed to go in to save the guy who was going after the driftwood. He had one boot on, so he took off the boot and set his hat and his cellphone down and the second he got to (the man already in the water), the guy pushed him down.

“It was just back and forth, bobbing heads, one up, one down. Another man got on other side of the fence with big long stick. I was holding onto him so he didn’t fall in, too. (One of the men) was a foot away from grabbing the stick, but he just couldn’t get it. That was it at that point. Everyone was starting to call 911 at the point, screaming 'Oh, my God, Oh, my God." I was hyperventilating. When you see someone who was just in front of you just sink ... ” 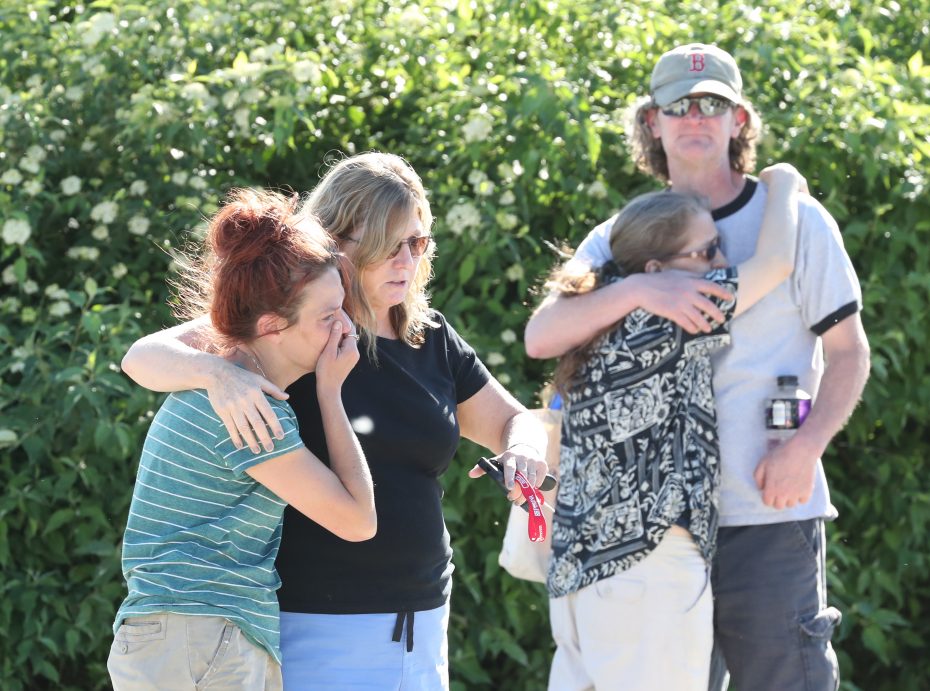 People who knew one of the drowning victims grieve at Broderick Park. (James P. McCoy/Buffalo News)

Several people in Broderick Park said Monday that a metal ladder, which provides access to the water, should be taken off a railing along the breakwall at the southern end of the park.

"That’s the one thing I want to complain (about)," said Pedro Albizu, a West Side resident who noted that he visits the park every day. "They remove that, nobody go in there.”

"They really need to remove that," added Maritza Feliciano, of Buffalo, who said that her 7-year-old brother drowned in the river there in 1993.

Dan Woods, of Ransomville, who fishes from the breakwall twice a week, said that life preservers should be installed, like the ones at the Power Authority in Niagara Falls, which he also visits.

"They have real nice life preservers, in case," he said, "and the rope is connected to the railing, and you can just throw it into the river and whoever is out there can catch it. The rope is probably about 50 feet (long).”

Buffalo's Underwater Recovery Team: What does it do?