We’ll be going past hot and heading into oppressively hot, at least for some people, starting Saturday.

The upper-air pattern will be setting up a mountainous ridge of high pressure close to Western New York, under which the atmosphere will bake. Sinking dry air aloft will compress and heat further on the way down, capping most chances for a few showers or thunderstorms from Saturday into July 4.

All the while, under this atmospheric cap, a southwest flow will still be able to transport humidity from the Gulf at the surface, raising our dew points and lowering evaporative cooling through perspiration.

It’s been a number of years since Western New York has experienced this kind of an extended heat wave. I’m aware there are many hearty souls who look forward to heat and humidity after the kind of winter and April we had.

However, this will be exceptional as a hot spell, and many are not acclimated to the length and intensity of this coming heat wave.

Here is what the upper air pattern will look like on Saturday as depicted by an ensemble of many runs of the European model: 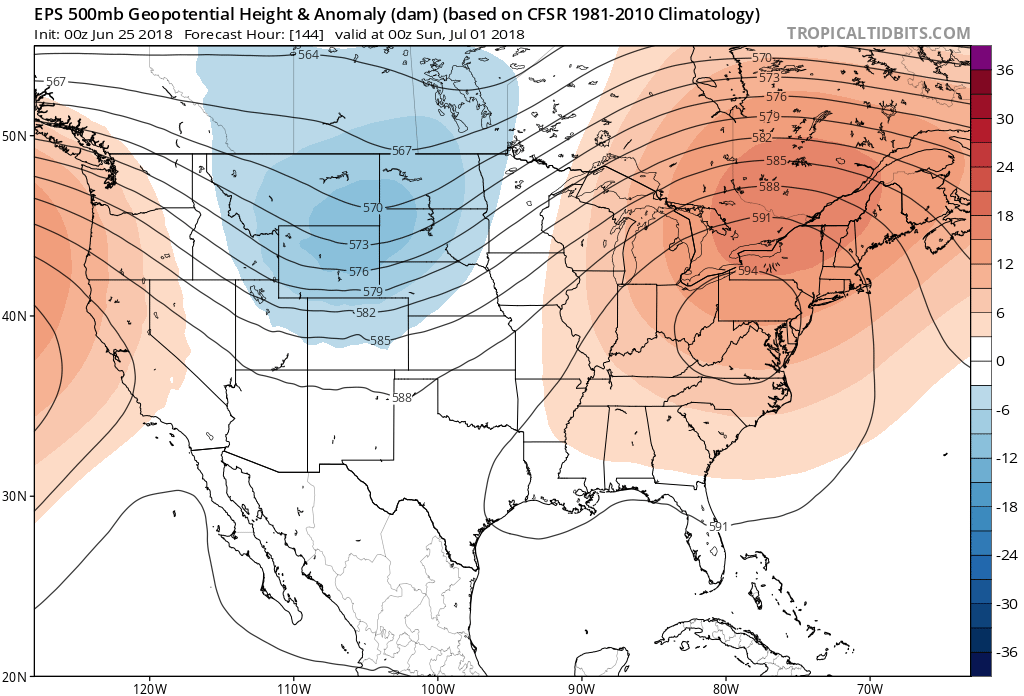 That even LOOKS hot, doesn’t it? And here’s a depiction for the Fourth of July: 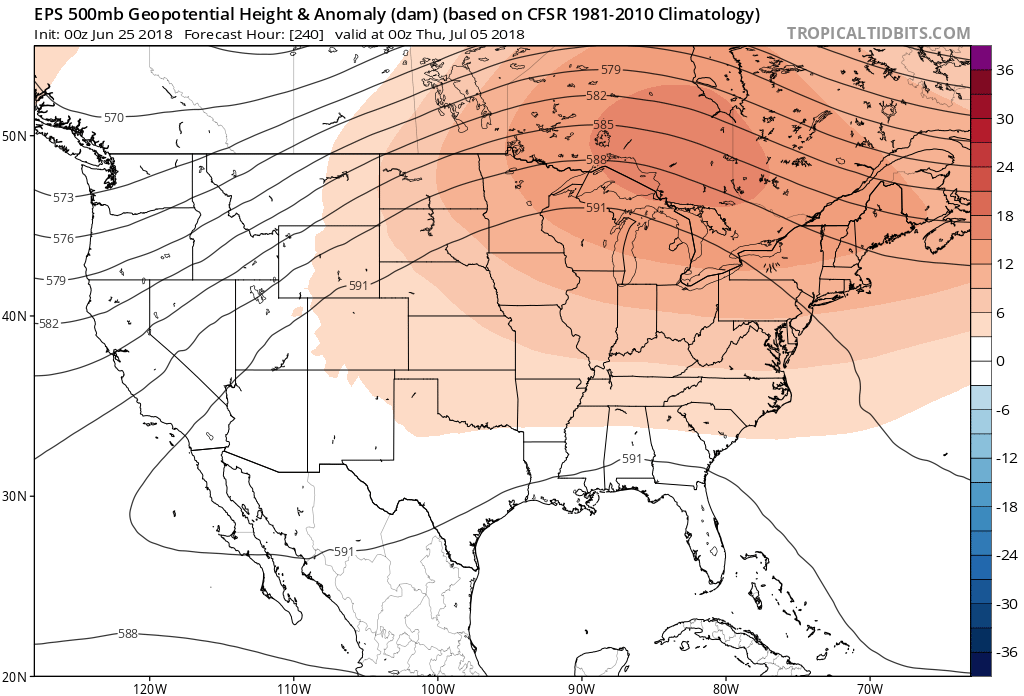 That’s not exactly looking cooler. So we are talking about, at minimum, five consecutive days of a hot ridge baking a large region, including us. During these five days, Western New York will generally find itself with a southwest flow at the surface coming around in a return flow behind a surface ridge to our south.

The southwest flow will at least help to produce something of a modest lake breeze in the metro area. Since the lake is going to be in the upper 60s, that will keep downtown and the waterfront several degrees cooler and make things more bearable on Lake Erie beaches. A southwest flow over northern Niagara, Orleans and sometimes northern Genesee Counties is a land flow, making those locations the hottest spots in Western New York. High temps will reach the mid- to upper 90s in places like Youngstown, Wilson, Newfane, Barker, Olcott and Albion. The hills will be a little cooler to the south, but the valleys may bake into the mid-90s as well.

Despite the humidity, soil will become parched again at the surface under this heat. There is a slight chance an isolated thundershower may pop on a couple of these days along the edge of the Lake Erie breeze, but it will be generally rain-free across most of the region. A hot ridge directly aloft is a hostile environment for upward convective currents to pop storms.

With conditions such as these, the heat index will exceed 100 degrees in many locations away from the lake breeze during the day. And, with these conditions it leads the forecasters at the National Weather Service HQ to predict high temps such as those shown at right.

Now, I doubt Canalside and the Lake Erie beaches are going to reach that 95 shown for Buffalo. But the majority of the interior as aforementioned will be in that range most days, give or take a few degrees. We might “only” top off in the upper 80s on the Fourth. It’s really too early to say anything that specific this far in advance except that it will be a hot and humid for the Fourth of July. Taken by itself, that might sound classic and appropriate. But let’s remember that’s going to be fifth straight hot and humid day.

For those not fortunate enough to have air conditioning, the warm nights add to longer-term stress on the body. Here is the projected morning low temp Monday.

Those at greatest risk to serious repercussions from this excessive heat include infants, many elderly people, and those with chronic lung or heart disease. I would also expect the state Department of Environmental Conservation to issue air quality alerts for elevated ozone on several of these days. All the usual precautions apply, some of which seem all-too-obvious. I cover these as well the signs and treatment for the stages of heat illness, which can become very serious, in this recent article:

Don Paul: When the heat is on, the danger is real

Finally, under prolonged heat like this, NYSEG and National Grid are going to be dealing with occasionally big-time peak loads. If you have air conditioning and ceiling fans, this will be the time to run those fans so you can set your thermostat a few degrees higher.