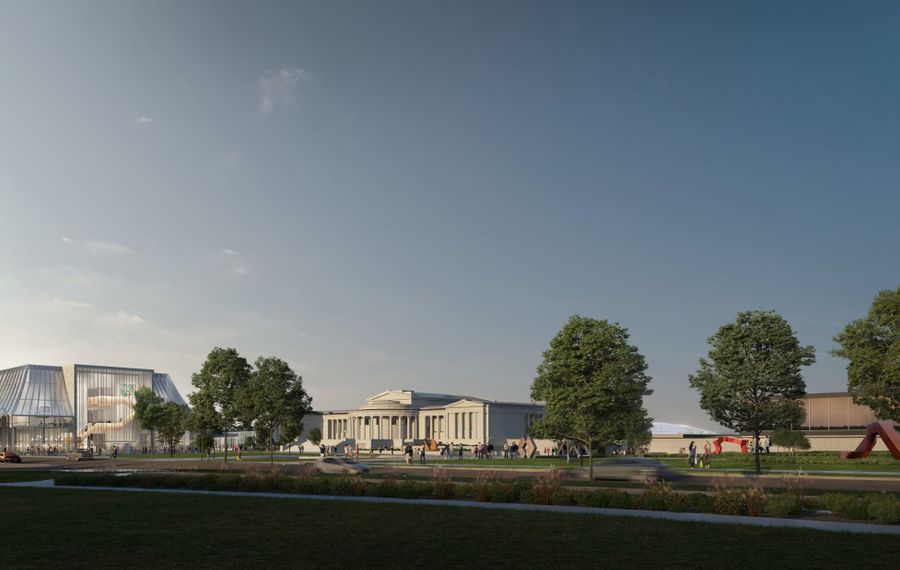 After spending months working with local, state and national preservationists, Albright-Knox Art Gallery officials on Monday announced a new design for its expansion that would spare a beloved 1962 building by Buffalo-born architect Gordon Bunshaft.

A dramatically different new direction for the gallery's long-planned expansion was approved unanimously Monday night by the Buffalo Fine Arts Academy, the board that oversees the gallery.

In stark contrast to a more compact design released last summer, the plan, designed by Shohei Shigematsu of the international architecture firm OMA, features a new building on the northwest side of the Albright-Knox campus along Iroquois Drive.

Sheathed in what Shigematsu called a "translucent skin," the transparent ziggurat of a building will allow pedestrians to see inside of its galleries and flexible event spaces. It also will contain a public atrium and café.

A winding, transparent "scenic bridge" will connect the new north building to E.B. Green's neoclassical 1905 building, as well as serving as a corridor for transporting art between the two spaces.

The newly released plan also calls for the open-air courtyard in the gallery's 1962 building to be covered and to serve as an "indoor town square," with an added entrance on the east side of the building providing access for those who either want to linger or simply pass through.

As in the past plan, the expansion project will include burying the gallery's current parking lot and creating a sprawling lawn on the west side of the E.B. Green building, as well as recreating that building's long-ago demolished west staircase.

Also preserved from that plan is the amount of total exhibition space the gallery will boast when the project is complete: 50,000 square feet, which Albright-Knox Director Janne Sirén said will "triple or quadruple" the number of artworks the gallery can display.

"You see a tip of an iceberg, and there are a lot of complexities and contradictions underneath that tip," Sirén said at Monday's presentation, hinting at the intense, behind-the-scenes process of working with local, state-level and national preservationists to re-engineer the gallery's expansion plans. "But this is one of those special moments for us."

The announcement follows months of silence from gallery officials, during which the Albright-Knox worked with Shigematsu, preservation consultants and others to develop an alternative to the controversial concept it released last summer.

That concept, which proposed radically modifying the entry hall and galleries of Bunshaft's sleek, modernist 1962 building into an airy indoor expanse and burying the gallery's parking lot, was criticized by preservationists and architectural historians concerned about Bunshaft's legacy.

This plan seems to have put those concerns to rest.

"We have the support – support's probably the right word – of preservation, both state and local," said Buffalo developer Michael Joseph, chairman of the AK360 project committee. 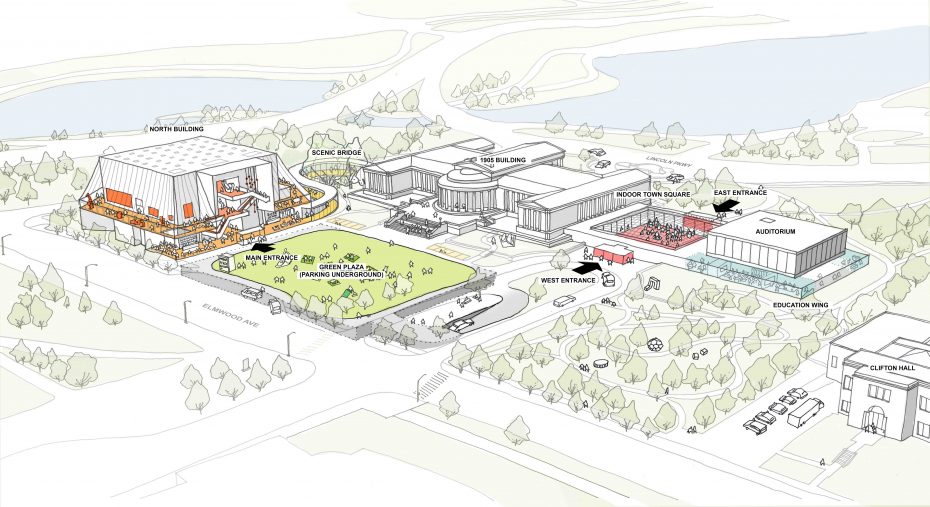 A schematic for the proposed expansion of the Albright-Knox Art Gallery shows a new northwest building, a new entry path and buried parking.

Gallery staff and employees of Preservation Studios declined repeated requests to speak about the process of addressing preservationists' concerns. So did one other local preservation expert, who signed a nondisclosure agreement with the gallery after being interviewed for a consulting job there.

But in November, the gallery announced in a statement that it was exploring an alternative solution – building an expansion on the north and northwest side of the gallery – "to determine whether this could meet the museum’s needs, while also minimizing impacts on the Albright-Knox’s historic buildings."

That plan, in turn, produced more critics — demonstrating the nearly impossible challenge the Albright-Knox and its architects face: How to produce an expansion that serves both history and the future, and that honors both the accomplishments of a great midcentury architect and the pressing practical needs of a contemporary gallery?

"If the administration and the architects have to take a bow to the preservationists, then they abrogate their responsibility to the institution, to the Albright-Knox, to the City of Buffalo and to the profession," the Buffalo-born architect Richard Gluckman told The News in November.

During Monday's presentation, Sirén said that the gallery has raised $125 million in pledges. Of those, 195 came from private individuals and families, four came from corporations, 15 came from foundations and the rest from public sources.

The gallery's long-planned expansion project, including a boost to its operating endowment, is slated to cost a total of $155 million. A third of that figure comes from the Los Angeles-based philanthropist and bond trader Jeffrey Gundlach, whose name will adorn the building when it opens in 2021 as the Buffalo Albright-Knox-Gundlach Art Museum.

"Who knows, maybe we'll get some money from abroad," said Sirén, possibly hinting at a potential funding source waiting in the wings.

"Of course, buildings are wonderful," Sirén said during his presentation. "But we're not in the business of building buildings just for the purpose of building. We do them because we are an institution that is in and of our community."