Fans of modernist buildings that look like a pumpkin on stilts won't be happy about this: Lackawanna wants to tear down the infamous addition to its City Hall.

Mayor Geoffrey Szymanski wants to demolish the City Hall annex, retrofit the original structure in the rear where police and court offices are housed and build a new seat of government on nearby vacant land where a Catholic church once stood.

Szymanski said an engineering firm is drawing up detailed designs for the $6.5 million project, which can't move forward until the Steel City finds the money to pay for it.

Lackawanna officials have talked for years about replacing the 50-year-old, orange-paneled structure, saying it is expensive to operate and badly in need of repair. Szymanski feels passionately that Lackawanna deserves a more attractive City Hall and is betting he can get the project underway before he leaves office at the end of next year.

"We'll be bringing that down and I'll be handing out orange panels to my enemies, for Christmas," Szymanski said in an interview.

The new incarnation of Lackawanna City Hall was constructed in 1968 and 1969 based on a design by Donald W. Love Architects and Associates. A Buffalo Evening News article from 1973 states "the building drew criticism when its cost soared from an original estimate of $850,000 to a completed cost of $1.4 million," or $9.5 million in 2017 adjusted for inflation.

"I think it's an abomination," said Joe Jerge, a former member of the Common Council and owner of Mulberry Italian Ristorante in the city. "We should probably bring charges against whoever designed it with that color."

City leaders have said they don't know why their modernist City Hall was built with orange paneling.

One theory is that it reflects one of the two colors, orange and green, used in at least one version of the Bethlehem Steel logo. Another, suggested partly in jest by Jerge, is that it allowed the orange dust that spewed from the steel plant to blend into the building's exterior. 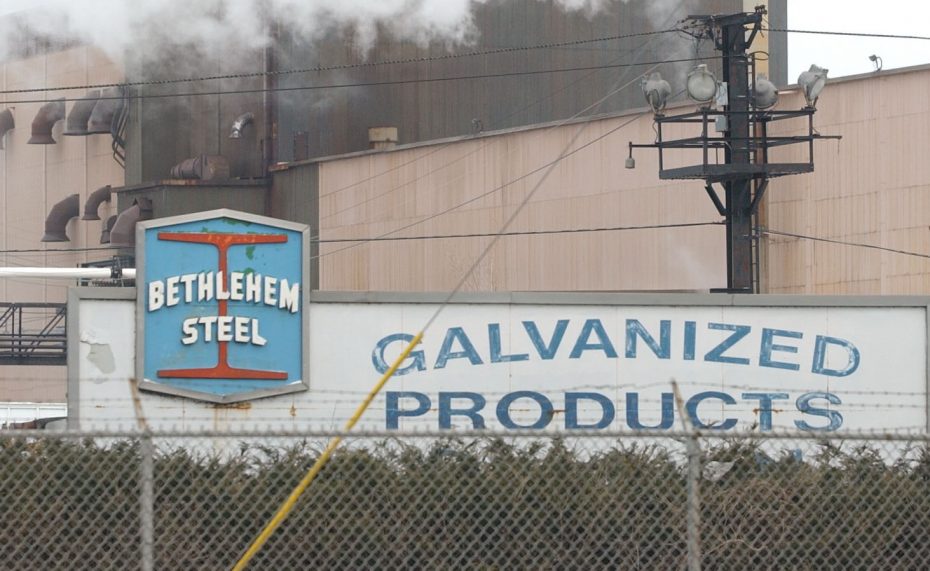 Could the color of Lackawanna's City Hall have been inspired by the Bethlehem Steel logo? (Sharon Cantillon/Buffalo News file photo)

"Maybe they did it to disguise the soot," said Jerge, who remembers his mother's daily ritual of cleaning it from their windows.

Anthony DeSantis, the city's commissioner of public works, at a 2015 meeting called City Hall "a money pit," saying the deteriorating structure needed at least $200,000 in repairs to the front steps and other areas. He said the building is too large for the city's needs and the metal pillars that hold up the structure had never been tested for their integrity.

Szymanski said there are no gas connections into City Hall, so the building's heating and cooling systems run off costlier electricity. He also complained about the 2-inch thick walls that don't provide good insulation or protection from the elements. Szymanski recalled going in once on Christmas Eve to caulk around some of the window frames.

"That building is the ugliest building on planet Earth, and it's diagonal from the most beautiful building on Earth," said Szymanski, referring to Our Lady of Victory Basilica.

Not everyone thinks the City Hall annex is beyond redemption. Christiana Limniatis, director of preservation services for Preservation Buffalo Niagara, said reusing existing buildings and infrastructure is preferred because it usually makes the most financial sense and it always is the most sustainable option.

Limniatis said it's easy to value a grand Art Deco or neo-Gothic building, but she said modernist buildings deserve the same appreciation and protection.

"These are irrevocable decisions and they should be made with reverence and with all available information and not just quickly because 'I don't like orange,' or whatever," she said.

Szymanski is confident the city can find the means to tear down its City Hall and build a replacement.

The city would construct a new building at the site of the former St. Barbara's Catholic Church, 551 Ridge Road, which was torn down by the diocese in 2011 and later acquired by the city.

That property is west of the existing City Hall, on the south side of Ridge Road directly across from the Lackawanna Public Library.

Clark Patterson Lee is drawing up a design for the new structure, Szymanski said. He estimated the new building would cost about $6 million, although he's awaiting the final plans.

The city would spend another $500,000 or so to tear down the City Hall addition and to retrofit the old City Hall that sits behind it, fixing up the façade and making it accessible to the disabled, the mayor said. The city's Police Department and its court operations would remain there.

Szymanski said he'd like to see the space in front of the old City Hall turned into additional parking for the city's downtown business district once the demolition is completed.

At this point, officials' passion for the project exceeds the available money.

"There is no time frame because it's all based on funding," the mayor said.

Jerge said he thinks the city should seek all available sources of grants, including the state and federal governments, and it should start setting aside funding in the next few budgets.

The New Lincoln Elementary School may serve as a cautionary note. The structure, which opened in 1925, has haunted Lackawanna for 30 years since it closed its doors and the city struggled to find the money to take it down. The Common Council last month finally approved nearly $1.3 million to pay for its demolition, but the work was delayed again.

"This whole city's going to rejoice when that building comes down," he said.