The creators of two inflammatory online fake news items don’t identify local defense attorney Joseph Terranova by name in any of the pictures on the phony stories – but there he is.

One shows Terranova standing in court next to a frightened-looking teen. The headline: “17-YEAR-OLD TEENAGER SUES HIS PARENTS FOR BEING BORN WHITE.”

In another, on the “satiric” World News Daily Report website, Terranova and the same teen are seen in a video under a different, grammatically incorrect headline: “AMERICAN TEENAGE WHOM KILLED MUSLIM REFUGEE FOR RAPING HIS 7YEARS OLD SISTER SENTENCED 30 YEARS IN PRISON.”

The stories are made up. The pictures are not. But that hasn't stopped them from ricocheting around the internet and back to Terranova in Buffalo.

“I hear about it almost every day,” Terranova said of his online appearances. “I don’t think a week goes by that someone doesn’t say ‘Are you really representing that kid?’ ”

To be accurate, the answer is both no and yes.

The photos are real, and Terranova did represent “that kid” about five years ago, in a memorable and tragic case.

Terranova’s client was Springville teenager Dylan Schumaker, who was convicted of second-degree murder for the fatal beating of his girlfriend’s 23-month-old son. 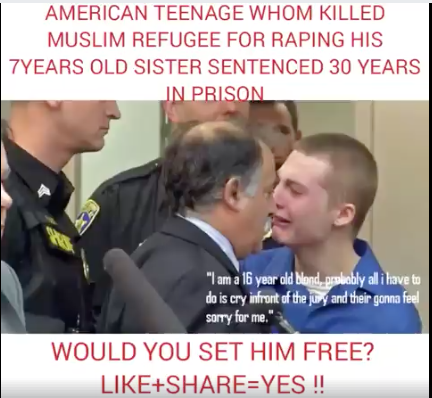 Schumaker was 16 years old in 2013 when he killed Austin Smith. The pictures used in the fake stories are from local television news coverage of his sentencing in State Supreme Court, when the distraught and tearful teen told the judge, “I never wanted to hurt Austin. I never wanted Austin to die.”

The judge, M. William Boller, wasn’t convinced. He called Schumaker “a manipulator and deceiver” and reminded him of the recording of a phone call he made from jail to his mother after his arrest. Those words helped catapult Schumaker into his first round of internet infamy.

“I’m a 16-year-old blond,” Schumaker was heard saying on the recording. “Probably all I have to do is cry in front of the jury, and they’re going to feel sorry for me.”

Schumaker, sobbing and red-eyed, was sentenced to the maximum punishment of 25 years to life; an Appellate Court later rolled back the sentence to 18 years to life.

In September, Schumaker's picture emerged on the fake story about a teen upset about the problems caused by his “white privilege.” Five months later, Terranova and Schumaker were back, this time on a video looking for sympathy for a teenager who killed the Muslim refugee who raped his little sister.

The story was debunked by the fact-checking website Snopes, which called the video "blatant fake news" and noted that it used "stolen and reappropriated images" from unrelated court cases.

Terranova says the whole thing has him mystified — partly because he doesn’t use much social media himself.

It all adds to what already was an odd news year for Terranova, a respected lawyer long known for handling some of the area’s most notorious cases, including defending the City Grill shooter. He was the subject of a genuine news story in March when he was attacked in the Holding Center by a client who had been convicted in a brutal domestic violence case.

Terranova, 63, was consulting with Mark Dublino to discuss Dublino’s upcoming sentencing for attacking two people with a sledgehammer and another with a shovel during a jealous rampage in Williamsville. Apparently unhappy with his representation, Dublino hit Terranova in the face before deputies could get into the small room where the two were meeting.

Dublino is charged with assault in that case, which returns to State Supreme Court in July. For these proceedings, Terranova won’t be standing next to the defendant. He will be a witness.