The timing is both coincidence and absolutely perfect.

In the same month that an American president accused a Canadian prime minister of dishonesty, with a trade war rumbling along a traditionally cordial border, the Niagara Parks Commission decided Friday to approve a new memorial in the Toronto Power Park at Niagara Falls, Ont., not far from the brink of the Horseshoe Falls.

The goal, renewed for a centennial remembrance, is explaining how a rusty, disintegrating metal shell, jutting from the Niagara River rapids, is a lasting monument to courage.

On Aug. 6, 1918, two men from Buffalo were trapped overnight amid the rapids, after an 80-foot scow used for dredging broke loose while they were on the job, according to Paul Gromosiak, a Niagara historian.

The two workers, who seemed doomed as the river pulled them toward the falls, survived through fast thinking, good fortune and a mind-bending act of heroism.

They were beneficiaries of the courage of William "Red" Hill Sr., a river legend and a guy recovering at the time from being gassed and wounded in World War I, a Canadian who put his own life at risk to save two American workers, trapped on the old scow.

This summer makes the 100th anniversary of the rescue. In Ontario, officials say they were planning a celebration well before the burst of international tension between top governmental leaders.

Even so, if you need a reminder of the enduring aspects of the long and warm border kinship between everyday people, here it is.

"It's a great story about international cooperation and bravery that has a happy ending," said James Hill, senior manager of heritage for the parks commission and no relation to Red Hill, or his family.

Michael Clarkson, an author and historian, said the sheer nerve of the event takes on undying status, even within the high-risk lore of Niagara.

"My God," he said. "It might be the most amazing rescue at the river, ever."

James Hill said the tale remains central to his childhood memories. When he was a little boy, visiting the falls, the story he always asked his mother to tell "wasn't about the daredevils or even the wall of water."

He wanted to know about the lonely scow, braced against the rapids while two weary men prepared themselves for death. Emergency workers feared it might break free at any second and go over the falls. 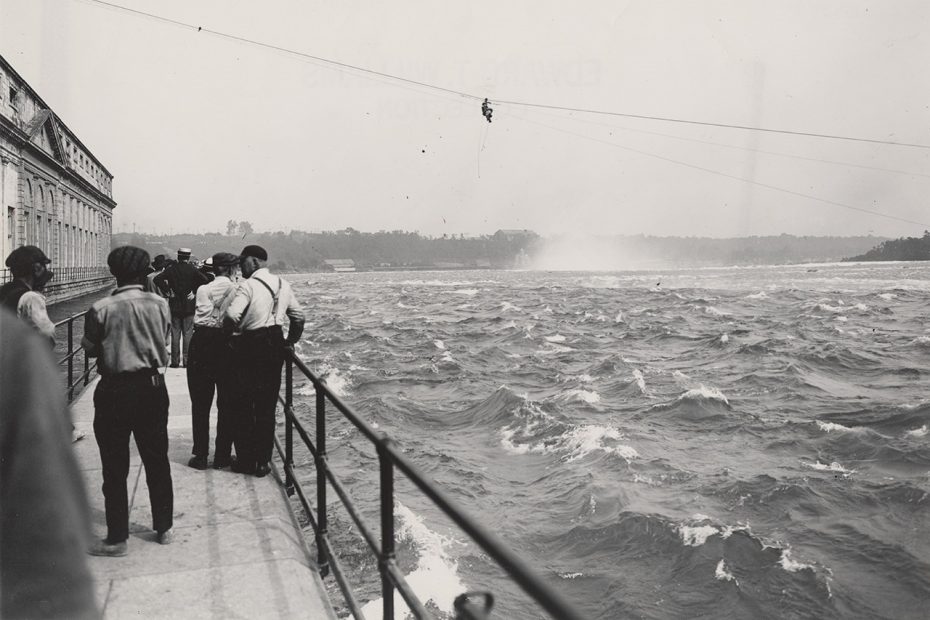 One of the men stranded on a scow is pulled to safety in August 1918, just above Niagara Falls. (Courtesy Niagara Falls Public Library Local History Room)

The drama has been recounted many times over the years, often with conflicting details. Still, based on newspaper accounts of the time and interviews with historians, this is the story:

Gustave F. Lofberg, 51, and a man who identified himself as James H. Harris were on the scow, dredging near the site of what Gromosiak said is now the Niagara Scenic Parkway on the U.S. side, when a tug boat went aground and a steel cable snapped from the strain of the river.

The scow, cut loose from the cable, was swept by the current toward the Canadian side, where hundreds of stunned spectators believed its passengers were "doomed to certain death," as the Niagara Falls Gazette put it the next day.

Indeed, Lofberg later told reporters that Harris called to him, "Look, we're going over the falls …. We're lost!" Lofberg, a Swedish immigrant who had worked on the Great Lakes since he was a teenager, said he responded, "We had only got to die once," words that he apparently intended to be reassuring.

The Gazette reported the two men "worked like mad" to open "airtight compartments at the bottom of the vessel," which allowed in water and helped the scow to ground itself on a stone ledge. There are different accounts about whether the anchor from the scow was of any help. What is absolutely clear is that their lives were in the balance.

They were alone in the rapids, in a vessel with little protection from the churning water, at a distance estimated at maybe 800 yards from the falls. Harris and Lofberg told reporters afterward that they were both thinking of ways they might survive if the scow broke loose and they were hurled over the brink.

For dozens of rescuers, long before the advent of helicopters, the question became: How to get the men to safety?

The answer demanded fast and intense cooperation from both sides of the river. Clarkson wrote of how the U.S. Coast Guard in Youngstown sent a crew racing to the scene with a lifeline cannon. He described how the line was anchored by a streetcar railing, how a command post was set up on the roof of a stone power station, how 100 men were involved in pulling on the line once the cannon managed to send it out to the scow.

Lofberg and Harris scrambled to set up a makeshift winch, and did their best to bind the line so tightly it could bear their weight.  That hardly meant they were home free. They still had to attach guy lines that could serve as a pulley. It was agonizing work, accomplished inch by inch, with the rescuers using notes or cardboard signs to help the stranded men figure out each step.

Above the river, Clarkson wrote, those guy lines soon grew hopelessly tangled. Finally, Hill – deeply respected in the region for his river knowledge – volunteered to try and work them free. Clarkson recalled how Hill's wife and children came to watch as he went out in the breeches buoy beneath the glare of spotlights; splashed by the river, fighting for balance, unsure of whether the line would even hold him up, he did his best to find a way to make it work. 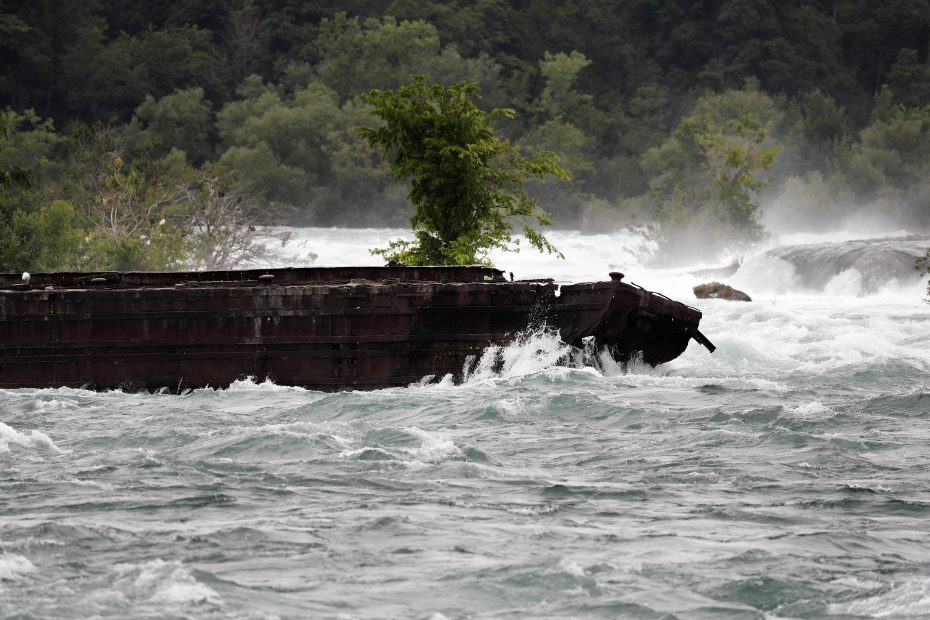 The Niagara River works relentlessly against a rusting scow, stranded near the Horseshoe Falls for 100 years, as of August. (Mark Mulville/Buffalo News)

Frustrated by the current and the darkness, Hill returned to shore. He grabbed some fitful rest, Clarkson wrote, as did the soaked and anxious men on the scow, who "slept at death's brink," as The Gazette put it.

The next morning, with daylight, Hill again, in every sense, put himself on the line. He eventually managed to figure out the tangle, then gestured to the rescuers to pull him back to shore, finally allowing the breeches buoy to reach the scow. The Gazette reported that Lofberg insisted his friend should be the first one pulled to safety. On the way, Harris dangled so low he was "submerged several times," the paper said. Only when he was safe did Lofberg agree to leave the scow, as the big crowd roared.

The two men shared their tale with reporters at the old Cataract House, a Niagara Falls hotel. Within a day, The Gazette reported, they were back to work on the river for the Great Lakes Dredge and Dock Co., maybe a mile from the falls.

As for their lives after being rescued from the scow? Megan Smolenyak – a nationally prominent researcher and genealogist – could find no lasting record of a James Harris based on the age, Niagara Street address or other information about his life in Buffalo reported by newspapers at the time, including his statement that he had five children. For whatever reason, Smolenyak wonders if he chose to use a pseudonym.

Lofberg, for his part, moved to California. According to family records, he was a bachelor who died in 1946. Smolenyak discovered that Lofberg had a nephew, also called Gus Lofberg, who gave his life heroically in the Solomon Islands during World War II and has a destroyer named in his honor.

The search led to several relatives, including a great-great-niece, Kimberly Sparks of Arkansas, who said she has spent years studying family history as a means of understanding her own life. She knew a few pieces of the tale about the scow, but she was thrilled to learn her relative displayed such composure, how he insisted that he be the last man brought to shore.

"That makes us feel really close," Sparks said, "to these people we never knew." 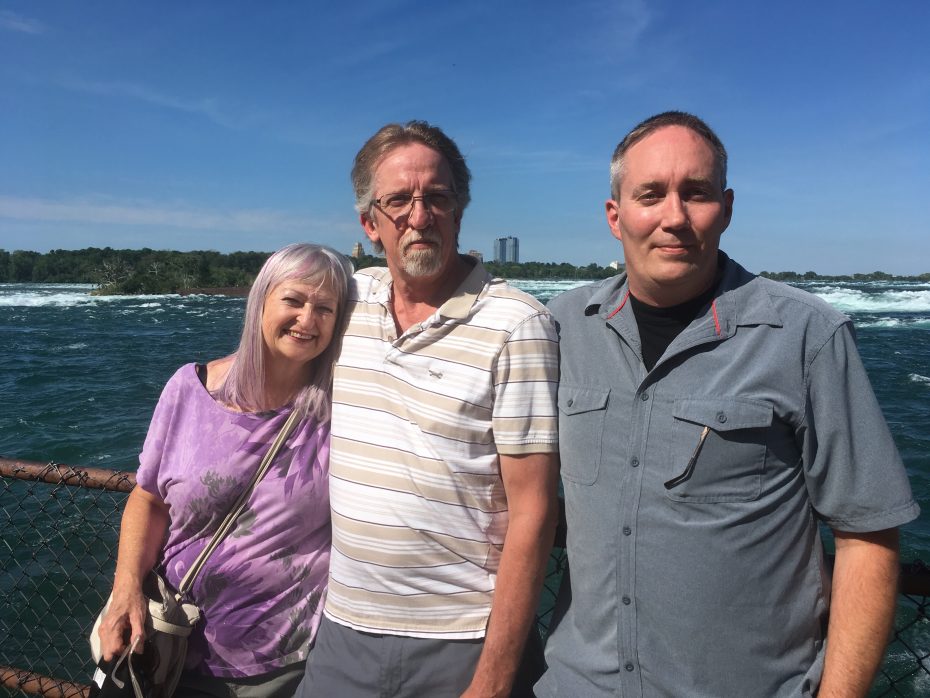 Melissa Hill-Powell Keep and Dan Hill, two grandchildren of William "Red" Hill Sr., and Kip Finn, a great-grandson are seen in Niagara Falls. The rusting scow on which two men were stranded in 1918 can be seen behind them. (Sean Kirst/Buffalo News)

The scow, after the rescue, remained where it was. The river was too dangerous to attempt a salvage. While many predicted it might break loose in a few months, it never did. It stayed put, a lonely focal point of Niagara folklore, even as it began to fall apart, tiny piece by tiny piece, over the years.

Today, such Niagara historians as Gromosiak and Sherman Zavitz agree that the scow may finally, and truly, be closing in on some kind of ending.

"There isn't much left," James Hill said. Last week, he met two of Red Hill Sr.'s grandchildren – Dan Hill and Melissa Hill-Powell Keep – near the scow, where they were joined by Kip Finn, one of Red Sr.'s great-grandsons.

While Red Hill Sr. died in 1942, his grandchildren grew up hearing the story from their parents, accounts offered in a matter-of-fact way at kitchen tables. Yet the scow, after a century's worth of being hammered by the current, has essentially worn down into a rusty L-shaped wall. Sooner or later, it will collapse from its own weight, and the river will finally claim the last vestige of the rescue.

"That's too bad," said Dan Hill, "because people should know." 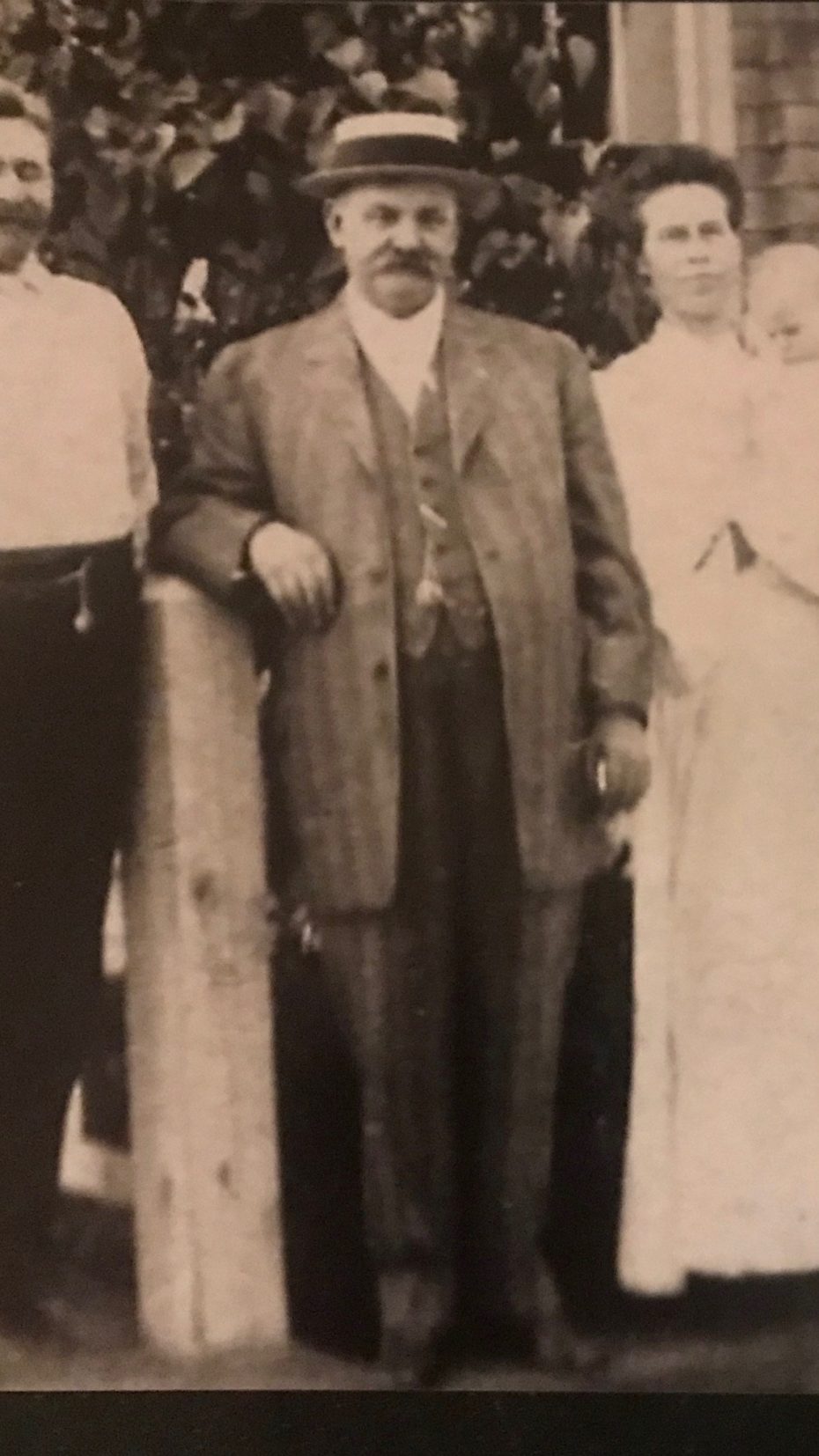 The parks commission hopes to offer a lasting answer to Hill's concern. By the time the centennial of the rescue arrives on Aug. 6, James Hill said new interpretative panels at the site will display images of how the two men were saved. There will also be a new and more elaborate plaque honoring Lofberg, Harris, their rescuers and specifically Red Hill Sr., whose name is absent from the small existing memorial.

In a city that bars life-risking feats at the falls, the Hill family remains famous for challenging the river. Red Sr.'s grandchildren suspect that his absence over the years from any civic plaque, despite his many medals for lifesaving, was due to municipal concern about his willingness to shoot the rapids and other daredevil feats linked to the family.

The bottom line is that the guy was bigger than life, always ready to put himself at risk for others, and his grandchildren wonder why no monument along the river carries his name.

"It's time," said James Hill, on behalf of the parks commission. "It's so important to acknowledge his bravery."

He also had a gentle reflection on the political storm between the nations, the kind of friction that James Hill said "always comes and goes." He spoke of the rescue as symbolic of "these border communities where we have so much in common, these communities that share so many families and friends."

That kinship, when it mattered, saved two men from the brink.