For the past 25 years or so, when the weather began to grow cool, Robert M. Mack began to prepare for Christmas.

As Santa to thousands of wide-eyed children, including visitors to Menne Nursery for the past 12 years, he had to inhabit the jolly elf's heart, not just his boots.

He grew his white beard and spruced up his bright red suit. He checked the blush that would rosy up his cheeks. He learned the names of the popular toys so he could tell kids not to expect them, while relieved parents grinned. He laid in a stock of candy canes.

And most important, he bought and stuck stamps on donation envelopes for the Alzheimer's Association, so those who appreciated his warm, welcoming Santa could support research into the deadly disease that claimed his beloved wife 10 years ago.

"He thought about Santa a lot," said his youngest daughter, Kathryn Schultz. "That was his whole thing, and it was year-round."

Mr. Mack died June 20 in his Buffalo home after a decline of several weeks. He was 91.

He was born in Utica, the second-oldest son of the late John Mack and Hazel (Moran) Mack Bauder and the brother of Cindy Loeschner and the now-deceased John Mack, Patricia Johnson, and Lois Conte.

Mr. Mack left school at age 17 to enlist in the Navy, serving as a medical corpsman. He shipped out on the maiden voyage of the aircraft carrier USS Randoph in the Pacific Theatre, his family said. After being discharged in 1946, he moved to Buffalo, where his mother's brother lived.

Family legend says that Mr. Mack's uncle recommended he stop by an East Side soda shop to meet a "real cute girl" there. "That, of course, was my mother," said Schultz.

He and RoseMarie Baumler married on Sept. 16, 1950, in Our Lady of Lourdes Church. They had three sons and two daughters and Mr. Mack held several jobs, said Schultz. He started working for the Aluminum Co. of America, did soil testing at the future site of the University at Buffalo North Campus, and for many years did payroll and bookkeeping for Frontier Trucking. He also worked for Bison Truck Parts before retiring in the 1980s, his daughter said.

Then his second life, as Santa, started.

Schultz said the family isn't sure exactly how or why Robert M. Mack first became Santa. "Maybe he tried to grow a beard and somebody told him he looked like Santa," with his twinkly blue eyes and white hair, she said. "Or maybe somebody asked him to be a Santa for a party."

"We didn't really know about it until later," she said of the family's Secret Santa. "But it snowballed from there."

He started with private parties and appearances at Tops Markets, where his other daughter worked at the time.

"My father was probably the skinniest Santa you ever met," weighing about 155 pounds at 5-foot-9, Schultz said. "He wasn't a roly-poly guy."

But what he lacked in girth he made up for in mirth. "He would joke with the children," she said. "He'd tell them goofy stories and tease them. My father loved to have fun."

He soon ditched his fake beard for a real one, trimming it close after the holidays. He improved his original George and Co. costume as time went on, buying real boots to replace the shoe covers and having a son add furry trim.

And it wasn't a job. It was a mission.

"He never accepted money for being Santa, ever," said Schultz. 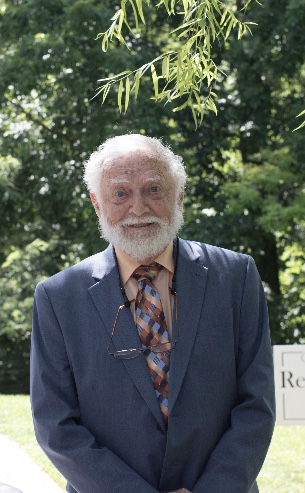 He remained jolly despite heartbreak at home. His wife was diagnosed with severe dementia around 2003 and died on June 1, 2008, said Schultz. But her diagnosis gave Santa a cause — he asked anyone who booked him for permission to hand out donation envelopes for the local Alzheimer's Association.

Mr. Mack's efforts, which included leading a team for several years in the annual Walk to End Alzheimer's, raised tens of thousands of dollars, said Lynn Westcott, director of development for the Western New York Chapter of the Alzheimer's Association.

"We referred to him as Santa Mack," she said. "He was such a wonderful supporter of the chapter."

In addition to his fundraising efforts, she said, "He stopped by the chapter's holiday party every couple of years dressed up as Santa, which we enjoyed."

"He was a really nice guy, and people just loved him," Westcott said.

"He was the sweetest guy," said Kathy Sokolowski, co-owner of the current business, Menne Garden Artistry in North Tonawanda. "People would come year after year to see him. He had such a different way of connecting with the kids and joking around with them, and even the little ones  weren't afraid of him."

For many years, he also played Santa at the Christmas party at Amherst Alliance Church, Schultz said.

In addition to raising money, Mr. Mack enjoyed the Santa interactions, his family said. "He loved little kids at that fun age when they still believe," Schultz said. If the child requested a trendy, expensive toy, he'd discourage that, she said, often to the relief of the child's parents. "He'd say, 'Santa is sick of making those, and that was a dumb design I made, anyway!'"

He got as much from being Santa as he gave, said his daughter: "I really think this kept him alive."

Mr. Mack was also a gardener who had Christmas in July as the theme for the University at Buffalo area Capen Garden Walk each July, said his son Robert Jr. When youngsters asked him why he wasn't at the North Pole, said his son, "He would tell them he was thawing out and that he gave the elves time off in July."

Mr. Mack was a bowler and an avid Buffalo Bills fan who had season tickets when the team played at the Rockpile. He was also a member of the Holy Name Society at St. Amelia’s Roman Catholic Church in Tonawanda.

He developed his lifelong love of golf when he caddied as a boy in Utica in return for a nickel or a soft drink, his daughter said. "He wasn't a terribly great golfer," Schultz said. "My mother used to joke, 'You've been playing it for so long, you think you'd be better,'" but he was proud that he once got a hole in one. He was a longtime member of St. Joseph's University parish golf league, in which he played until last year.

Mr. Mack was devoted to his chihuahua, Annie. While he was hospitalized briefly in May, every time Schultz visited, he would suggest that she smuggle Annie in for a visit. "He'd say, 'Do you have a purse that's big enough?'" she said, laughing.

Mr. Mack returned home from the hospital and then declined quickly. In his final days, he was cared for by his family, with help from Hospice Buffalo, his daughter said.

Besides Schultz and his son, Robert Jr., he is survived by his children James, John, Susan Maier, and Christopher; 11 grandchildren and 10 great-grandchildren; and many nieces and nephews.

A Mass of Christian Burial will be offered at 9:30 a.m. Monday in St. Rose of Lima Catholic Church, Parkside and Parker avenues.