DALLAS — Rasmus Dahlin, wearing his blue Buffalo Sabres jersey and cap from the night before, sat with his family in the lower bowl of the American Airlines Center. It was Saturday morning; he was waiting for Day 2 of the NHL Draft to begin.

Dahlin was relaxed, leaning over to talk to his older brother and younger sister, and laughing often. It was a stark contrast to the previous evening, when he sat stiff and solemnly, awaiting the opening of the draft, when the Sabres made the 18-year-old Swedish defenseman the first overall pick. That inevitable moment led to an immediate, interminable series of duties: interviews, photoshoots, grip-and-grins, sponsor autographs, more interviews, more photos, more everything — until he left the arena, got to his hotel, and went to bed.

Now, the next morning, he had a simple duty. The Sabres were about to open the second round of the draft, making the 32nd overall selection. Dahlin was stationed at the bottom of the steps leading to the arena floor, ready to greet whomever was called. It was his turn to welcome another new guy to the Buffalo Sabres.

Moments later, the name was revealed by a voice blaring through speakers: “The Buffalo Sabres select, from the USA Hockey National Team Development Program, Mattias Samuelsson.” 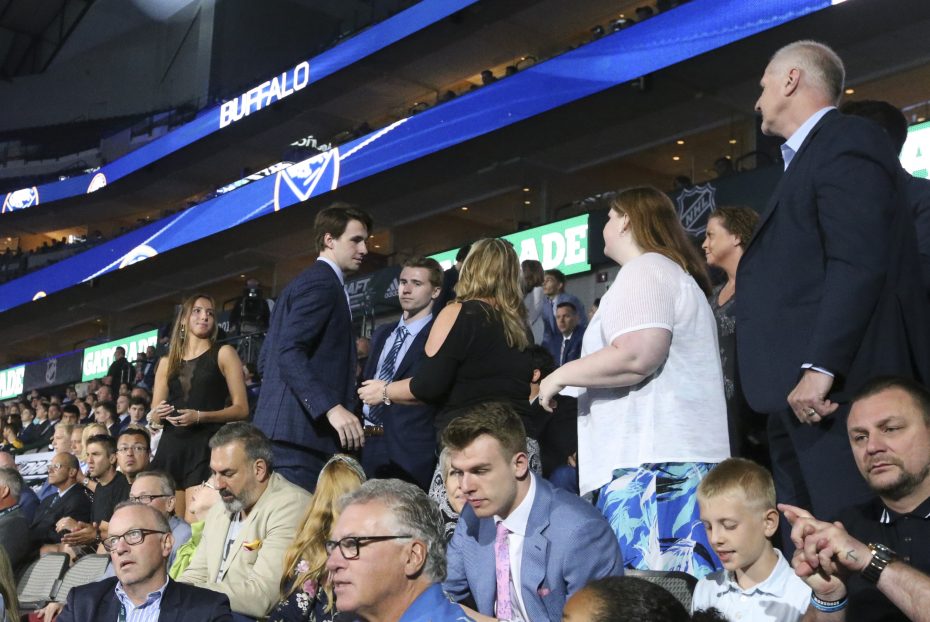 Mattias Samuelsson stands up as he is named the Buffalo Sabres' second-round pick in the NHL Draft. (James P. McCoy/Buffalo News)

Cheers erupted at the top of the aisle where Dahlin was waiting. Samuelsson, whose tall frame was fitted into a dark blue suit, doled out some hugs and handshakes as he descended the steps. At the bottom, he slapped his hand into Dahlin’s, then took off his coat and pulled on his own Sabres jersey with his draft year – 18 – numbered on the back.

The Sabres’ general manager walked straight up to Samuelsson. “I’m Jason Botterill,” he said, clasping the 18-year-old’s hand. “Welcome to the organization. Glad to have you on board.” Team owners Terry and Kim Pegula greeted him next, and then Samuelsson worked his way around the table, meeting the scouts and assistant general managers whose evaluations led to his choosing.

When the hellos were done, Samuelsson was whisked backstage and brought into the interview room. He sat at a “pod” – a miniature stage, with a small table and a green-themed NHL Draft backdrop – where reporters gathered scrum-style to ask him questions.

Did he have reason to expect the Sabres would choose him? (Perhaps. “My meeting with them at the Combine went well.”)

How are you feeling right now? (Exactly how you think. “I’m literally shaking. I’m so happy.”)

He answered questions that you always ask a guy drafted high in the second round — namely, was he disappointed his slipped past the first round? “Obviously, everyone wants to be first round and everything,” Samuelsson said. “It was a little upsetting, but coming into this, I knew I was going to be called pretty quick here.”

He addressed his fellow defenseman Dahlin: “Rasmus, obviously, is pretty much a generational player and basically the organization’s go-to guy on the blue line for probably many years to come. Just being in the same draft year as him, and getting to come up with him, it’s going to be pretty special...”

Shortly after, the questions turned to his bloodline. Samuelsson’s father, Kjell, played 14 NHL seasons as a defenseman for the New York Rangers, Philadelphia Flyers, Pittsburgh Penguins and Tampa Bay Lightning. He retired in 1999 and now works in player development for the Flyers.

“He’s always there, and he always knows what to say,” Mattias Samuelsson said. “He knows what gets me rattled, he knows what calms me down. He’s always been there for me. It’s nice to have someone like that on your side.”

In many ways, it is nice. But is also begs a question that wasn’t asked, at least not directly: Does having an NHL pedigree cast a long shadow?

Ten spots behind Samuelsson, the Carolina Hurricanes selected Jack Drury, whose father Ted played for six NHL clubs, and whose uncle Chris won a Stanley Cup with Colorado and is a former Sabres captain. During his post-selection interviews, Drury, an affable teen who is Harvard-bound this fall, spoke openly about wanting to “create my own great path in the NHL.”

“It certainly helps getting to learn from them,” Drury said. “But for me personally, I want to create something of my own. I don’t want to just be known as Ted Drury’s son or Chris Drury’s nephew. I want to be known as Jack Drury.”

Drury recalled a moment when he was playing for the Chicago Mission, a top amateur program, when he was around 12 years old. His team had several players whose fathers were former professionals. At a tournament, he overheard a couple of dads from opposing teams grumbling about it. “They were like, ‘Yeah, they’ve just got a bunch of pros’ sons. Their team isn’t actually that good. They just look good because they have pros’ sons,’” Drury said. “For a couple years, that kind of pushed me.”

When Drury reached junior hockey with the Waterloo Black Hawks, that dynamic changed and his frustration faded. “Then, it becomes a business,” he said. “It doesn’t matter who you’re related to. You have to earn it every single day.”

Which is even truer in the National Hockey League, where production rises above all. But the family connections do mean something to scouts. At the conclusion of the draft, Sabres assistant general manager Randy Sexton was asked about the value of Samuelsson growing up around big-league hockey.

"It's very difficult to play in our league,” Sexton said. “I've always believed that players who grow up in a hockey family, have a family member who've played and gone through the difficult path it takes to play and stay in the NHL, really do have a competitive advantage over some of the other players.”

During Mattias Samuelsson’s press conference, his soon-to-be college coach was listening in. Samuelsson will be a freshman this fall at Western Michigan, where he will be a teammate to his brother Lukas and coached by Andy Murray. Before he came to Western Michigan in 2011, Murray spent 20 years as a coach in the NHL, including a late-'80s stint with the Philadelphia Flyers when Kjell Samuelsson was a player.

As Murray listened to Mattias field questions, it reminded him of Kjell and the rest of the Samuelsson family. “He thanked the right people, and he has an honest perspective of what we needs to do,” said Murray, speaking by phone Saturday afternoon. “It’s the way he carries himself. He’s mature for an 18-year-old. That comes, I think, from the upbringing. If you asked people about Kjell Samuelsson as a player or as a person, the first thing you would hear would be the word ‘solid.’ He’s just a solid guy, and that’s what we see in Mattias, and it’s the same with his brother, Lukas, and his mother as well.”

Both Murray and the younger Samuelsson addressed the inevitable comparisons between Mattias, who is a 6-foot-4 defenseman, and Kjell, who is 6-foot-6.

“He was a pretty big defenseman,” Mattias said of his father. “He’s definitely taught me to stick up for myself and how to use my body, not to be down, don’t be afraid, play your style of game and use my size to my advantage.”

Speaking separately, Murray said, “He plays a lot like his dad. He’s got the wingspan. He’s got the reach. He plays physical.” Mattias plays a more offensive game than his father, did, Murray added, which is largely “because the nature of today’s game demands that of defensemen.”

Mike Harrington: Botterill doing things his way, bizarre as it may seem
Relaxed Dahlin welcomes Samuelsson, who quietly takes it in
Sabres stay quiet on trade front – for now
How many picks do the Sabres have in 2019 NHL Draft?
Pancho Billa brings his #PanchoPower to the NHL Draft, too

All of which is great for Western Michigan and Sabres prospect-watchers. But the chances of Sameulsson demonstrating those skills in the regular season at the NHL level in the next year or two are fairly slim. He’ll likely need at least a couple of seasons to develop, which is another reason Sexton likes his appreciation for big-league hockey.

Taking it all in

In Dallas, however, Samuelsson still needed that official invitation to pursue the NHL. Or put another way, he needed to get drafted. And as much as he knew he would get chosen, and even hoped it would be in the first round, Samuelsson was tense. Mattias was texting Murray about his nerves. Murray recalled his response: “I said, ‘There are a lot of young hockey players in the world right now who would like to be nervous, just like you, but they’re not.’ I think he recognizes the privilege that it is.”

Once he was chosen, Samuelsson seemed to take it in. After the handshakes on the draft floor, the media interviews, and the series of photos and signings, he reunited briefly with Dahlin in the arena hallway.

Dahlin was still relaxed and well-rested; when someone asked how he slept, he answered with a broad smile and a thumbs-up, “Best night ever!”

Samuelsson, though, was quieter, and showed little expression. He had just been drafted, and he was still processing that reality. “I think it’s still sinking in for me,” he said. “Just the whole experience of getting your name called, all this behind-the-scenes stuff. It’s a little overwhelming.”

Dahlin could relate. “I actually don’t remember everything” from the night before, he admitted. But, he added, “It was a fun time.”

It likely will be for Samuelsson, too. Once he fully realizes the time is here.