Like many of their northern Niagara County neighbors, Christine Bronson and her husband Robert Verheyn watched with a sense of foreboding last year as the high water of Lake Ontario began swallowing their property in Somerset.

They also knew they had to do something about it.

"We knew it wasn't maintenance-free, living on the lake," Bronson said.

So with a promise from the state that money they spent to protect their property would be reimbursed, Bronson and Verheyn spent $17,000 to have 330 tons of rock installed as a wall on 75 feet of lake frontage and waited for the check from New York to arrive.

They're still waiting. So are hundreds of their Niagara County lakefront neighbors. 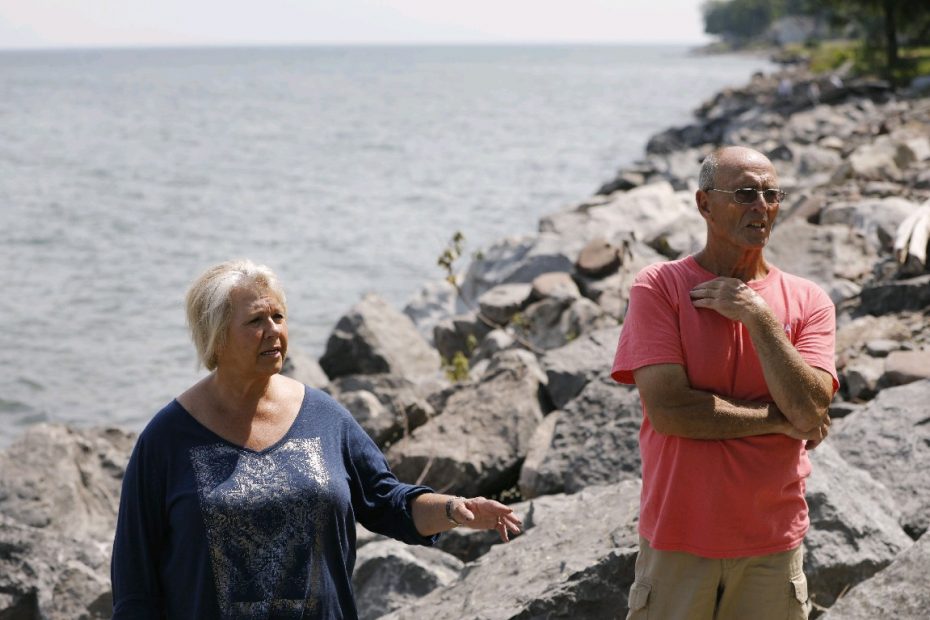 Christine Bronson and her husband Robert Verheyn hesitated before deciding to spend $17,000 on a wall of rock to protect their lakefront property, but decided there was no alternative.
"How could we do it? How could we not do it?" Bronson asked. (Derek Gee/Buffalo News)

Gov. Andrew M. Cuomo promised $95 million in aid to residents, businesses and governments that lost land to flooding and erosion caused by high water. But Niagara County residents who have taken steps to protect their properties have been told that they may be waiting a year or more for their reimbursements. And it's not necessarily first-come, first-served; emergencies come first, especially for property owners who can't afford to pay for work themselves.

About 500 Niagara County property owners are in the state database, but so far only about 80 of them of them have been paid, receiving a total of $1.85 million. Those figures came from Kathleen L. Steinman, who is in charge of processing the reimbursement requests. She said last week that all the payments might not be processed until mid-2019, or later.

By the time the relief project is complete, Steinman estimated, about $12 million in state funds will be paid to lakefront residents in Niagara County.

Steinman is the executive director of Niagara Falls Neighborhood Housing Services, a not-for-profit agency with five employees, whose primary purpose is managing rental properties for low-income Falls residents or helping them fix up existing housing.

But since Neighborhood Housing Services already had a relationship with New York State Homes and Community Renewal, the state agency assigned to handle the Lake Ontario effort, Steinman got the job of processing these reimbursements. Similar nonprofit agencies were chosen to administer the program in other regions.

“New York State is fully committed to helping homeowners recover from last year’s Lake Ontario flooding, and all eligible homeowner applications will receive funding as we build back stronger and smarter," said Charni Sochet, spokeswoman for New York State Homes and Community Renewal. "In the aftermath of the flooding, applications of homeowners facing imminent life and safety issues were prioritized, and oversight measures to protect homeowners from price gouging were implemented. Homeowners can expect that as we move through the more complex life and safety cases, the delivery of funds will happen faster.”

Lakeshore residents are calling and emailing Steinman every day to find out why they haven't been paid yet.

"It's taking up our whole life," she said. "I don't think anyone realized how time-consuming it would be and how cumbersome it would be."

She said rules for the program specify that the priority goes to emergencies, defined as those whose homes or septic tanks are in imminent danger of falling into the lake. If there's 50 feet or less of land between such a structure and the water, that's an emergency.

And those property owners who have the resources to pay a contractor have to wait behind those who don't have that kind of cash.

Steinman said the state asked the poorer property owners to obtain two quotes from contractors and send in the details. The state would hire the low bidder and pay that contractor directly, through Neighborhood Housing Services.

Those are the top priority jobs. Everyone else has to wait in line.

"This is not a very quick program. It's not an easy program," Steinman said. "The reimbursements have happened from the very top of the list on down, but everybody wants to be paid now."

The state won't spend more than $50,000 on any single property, and any cost above that is the property owner's responsibility.

Steinman said the rules dictate that docks, boat launches, stone steps or other high-end items do not qualify. She said the state intends to pay only for protection that's deemed "adequate."

"If a homeowner wants to do something more than adequate, the homeowner has to pay the difference," Steinman said.

Residents who already have invested big money in hiring a company to build protective structures such as walls of rock will just have to sit tight.

Ben Faery of Wilson is waiting for about $60,000 to pay for 1,000 tons of rock to protect 320 feet of frontage. He forwarded an April 3 email exchange with Steinman to The Buffalo News in which he described his predicament as "urgent." He said he used his own money to hire a contractor as a result and worried that reimbursement would not be coming "anytime soon."

Steinman response said, in part: "When we are in between emergencies, we are paying folks from the very top of the list down which is based on when an application was received. The higher the number on our system the later the application was received. To date we have paid very few people. Your application sits at 300 of approximately 500 people. While I understand your hardship, we are unable to assist you until such time we reach you on our list."

Many property owners are in the same boat as Faery. Some spent savings, used home equity lines of credit, or took out other loans to pay for protection from high lake waters, assuming the state would soon make them financially whole.

"I feel for people who took it out of savings or are strapped," Steinman told The News. "Everybody with a legitimate claim will be satisfied. It will happen. Just be patient."

Bronson showed a reporter a list of her neighbors' costs, ranging as high as $38,000.

"We have 13 people on our block, and they're all waiting for their money," Bronson said. "There are people paying home equity interest. You would be in tough shape if you knew you needed a new roof or siding."

The high costs made Bronson and Verheyn hesitate, but the 15-year lakeshore residents decided there was no alternative.

Meanwhile, despite optimistic forecasts and statements from agencies about dropping lake water levels, some residents say the lake is still doing damage.

"My flagpole went down and I probably lost another 10 feet of land this spring," Meg Thompson of Wilson said. "They say the water's down, but (the land) has all been compromised."

Thompson said she expects to spend about $50,000 on 100 feet of stone wall. Bruce Williams of Somerset said he applied early for the state funding, but spent $17,000 of his own money on a rock wall.

"We had to do this to protect the land where our homes sit," Bronson said. "At least I can sleep at night now."