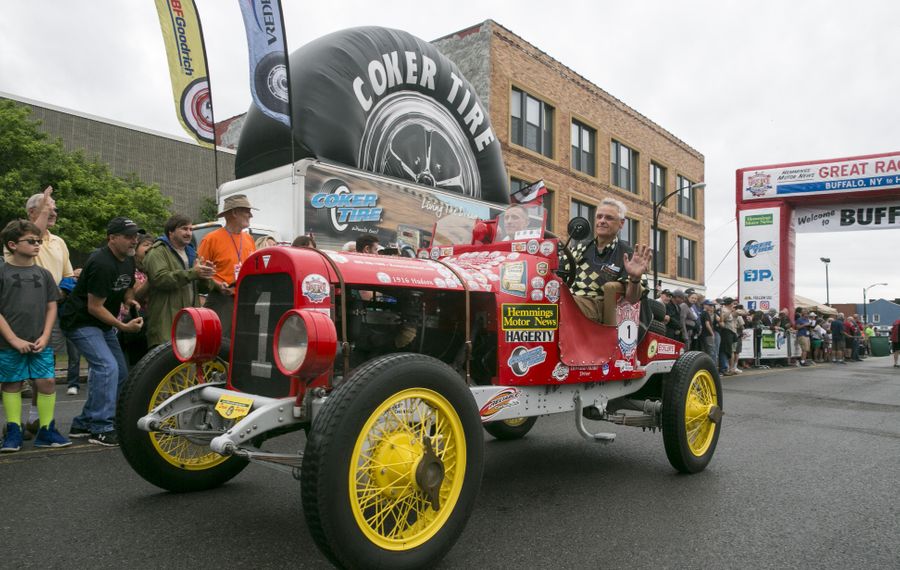 Craig Rubright's "all-American car" has a Ford body, a Chevrolet 283 V-8 engine taken from a 1957 Corvette and a Coppertone orange color that came from Chrysler paint.

But the aesthetics of the car weren't the greatest of Rubright's concerns on Saturday as he parked it at the Buffalo Transportation Pierce-Arrow Museum.

He was focused on arriving in good condition 2,300 miles away in Nova Scotia, Canada, in the next nine days.

Rubright was one of dozens of drivers who took off from Buffalo on Saturday for the 35th annual Hemmings Motor News Great Race.

The race offers more than $150,000 in prizes to participants who perform well in qualifying categories. Participants must follow a number of rules that test their car's driving ability. They are given a daily route navigation map only 30 minutes prior to takeoff. Any technical errors are docked from participant scores.

Tim and Marlene Mangan are a married duo who participate in the race together. The two brought their 1965 Ford Fairlane from Bend, Ore., in a trailer they drove overnight. Tim Mangan says that he doesn't obsess over race technicalities because "to finish is to win."

Lower scores equal better performance in this race, so drivers must exhibit "precise driving," as Tim Mangan would say, to have successful results. With secret checkpoints, the race is nothing short of friendly competition.

Tim Mangan, who has raced for the last three years, enjoys making friends at the race and says "it's like a big family."

This is the first year Buffalo has hosted the start of the race, which closed Seneca Street between Michigan Avenue and Chicago Street on Saturday.

9-day, 2,300-mile Great Race sets off from Buffalo this weekend

Rubright has participated in the race for the last six years. For five of those years, he drove his 1937 Ford, which he said encompasses everything American cars do.  The car has withstood five races, placing second in the rookie class its first year and fourth in the sportsman class the last four years.

Some racers are equipped with a pit crew that follows along the nine-day journey, but because the cars are vintage, many of them don't make it to the finish line.

Rich McKone from Peoria, Ill., has a two-door 1936 Ford Deluxe Sedan that has broken down only three times midrace in the last 24 years.

The race, for McKone, is a test of "mathematical skill." McKone said he develops mathematical formulas to predict his race outcome. These efforts have helped him achieve three consecutive perfect scores.

Ted Stahl and his family own a car museum in Chesterfield, Mich. For the last eight years, the Stahls have attended the race and lugged six show cars to participate. Stahl says the purpose of the race, for him, is "not about winning."

"It's about finishing," Stahl said.

Although he says that the race is "extremely challenging" and hard on his cars, Stahl described the event as "a blast and a half."

Deborah Jonson, of Buffalo, was one of the spectators who gathered to watch the rainy start of the race Saturday morning.

Although she'd never been to the Pierce-Arrow Museum, Johnson said she was anxious to see what was in store for the race and was glad to be "taking advantage of the fun resources we have in Buffalo."