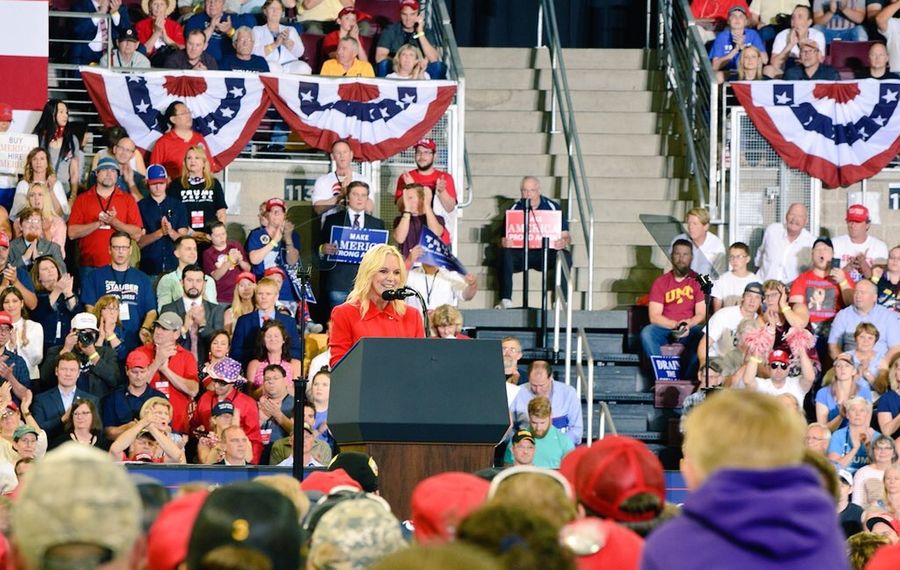 In Buffalo, Karin Housley is best known as the wife of the Sabres' head coach.

But now the rest of the country knows her as the U.S. Senate candidate who got a shoutout from President Trump one night and a gentle mocking from Jimmy Fallon the next.

During his rally in Duluth, Minn. Wednesday, Trump called a group of congressman onstage, and wanted Housley to join him too. “State Senator Karin Housley — Karin, come up on here,” Trump said. "Get 'em up here."

The "'em" – short for them – referred to Housley and Minnesota Lt. Gov. Fischbach, whom Trump also acknowledged. When he saw Housley was seated too far away, he pointed to her and said, “Stay there. Too much of a deal.”

He also wished Housley well in her race for a U.S. Senate seat.

The thoroughly modern marriage of Phil and Karin Housley

That shoutout, Housley told The Buffalo News later that evening, signified that the campaign for the Senate seat formerly held by Democrat Al Franken is "really on the map" now. So did an invitation she received five days earlier. The Trump team asked Housley to be an opening speaker for the president in Duluth, and she used her four minutes onstage to romance the Trump crowd.

“The president of the United States is in Duluth,” Housley said, raising her hands to pump the crowd.

Housley, who is the wife of Sabres coach Phil Housley and spends part of her time in Buffalo, continued to conduct the crowd.

“My name is Karin Housley,” she said, “and I’m running for the United States Senate seat once held by the disgraced Al Franken.”

On cue, the crowd booed.

Housley is a Republican state senator who is running for the U.S. Senate seat formerly held by Franken, the Democratic comedian-turned-senator who resigned in January in the midst of misconduct accusations. Minnesota Gov. Mark Dayton, who is a Democrat, named Tina Smith, then the lieutenant governor, as Franken’s replacement. Housley is the Republican frontrunner to take on Smith in November. To win that race, Housley told the News by phone driving home from the Duluth arena, “I have to get every single Trump voter to come and vote — and vote for me.”

And so she spoke their language. In her four-minute speech, Housley gave her opponent a nickname – “let’s call her ‘Taxin’ Tina,’” she said – and tagged Smith as a never-Trumper.

“She’s a proud member of the resistance group that is calling for President Trump’s impeachment.” More boos. “This sitting senator refuses to accept the reality that Donald Trump is our president and that he is making America great again.”

It was such an honor to speak before thousands of excited Minnesotans at @POTUS @realDonaldTrump's rally yesterday in Duluth. Thanks for the incredible support. Join #TeamHousley at https://t.co/j2CduTbvDl #mnsen pic.twitter.com/VzpZtDep0k

Reflecting from her car after the speech, Housley said the invitation to speak, plus the presidential mention onstage, were positive signs for her campaign.

“We knew today if he gave me a shoutout, and when they asked me to speak before, we were like, ‘OK, we’re really on the map now,’ ” she said.

Housley spoke out earlier in the week against the Trump administration separating children from parents who crossed illegally at borders, which Trump ended hours before the rally with an executive order.

“When you believe in 80 percent of what he’s doing,” Housley said, “I’m still going to go support him.”

The Trump rally got plenty of media attention from news programs and comedy writers, including the writing staff at "The Tonight Show Starring Jimmy Fallon." One night later, in his monologue, Fallon said, "(Trump) tried to call a state senator up to the stage. Look at what Trump said when he realized where the guy was sitting." (The "guy" reference was presumably borne of confusion over Trump saying "Get 'em up here," which sounds like "Get him up here.")

The clip played and then Fallon mocked it. " 'Too much of a deal!' " he said. "It was like the world's most awkward episode of 'The Price is Right,' like, 'C'mon down! Actually — forget it. Stay where you are.'"

That night on Twitter, Karin Housley posted a video clip of Fallon, and tagged both the TV host and the president with a brief commentary: "This is what happens when you don’t sit on the aisle. Btw, I’m female, & running for the US Senate."

To that, she added a winking emoji.

This is what happens when you don’t sit on the aisle. Btw, I’m female, & running for the US Senate. 😉 @jimmyfallon @realDonaldTrump pic.twitter.com/UtoJvKEvwC