Mickey Osterreicher will be in his accustomed place for tonight's Peloton. Osterreicher, a longtime marshal for the event, will lead the second column in the 12-mile, two-by-two bicycle procession that officially begins this weekend's Ride for Roswell, a major fundraiser for the Roswell Park Comprehensive Cancer Center in Buffalo.

Every June, on a Friday evening, cancer patients and survivors go to the windows of Roswell or line the sidewalks to watch the Peloton begin.

A year ago, Osterreicher – a Buffalo-based First Amendment lawyer – was part of that crowd. He was only a couple of days past surgery for brain cancer, and less than two weeks past the revelation that he had cancer at all. His good friend and fellow lawyer, Steve Boyd, rode in his place.

At the time, Boyd said, "I really thought we were getting ready to say goodbye."

Tonight, Osterreicher will again climb onto his bicycle. He has already exceeded his fundraising goal by $2,000.

Sean Kirst: A tale of friendship that winds through the Ride for Roswell

Last June, we shared the story of Boyd and Osterreicher, 65, whose friendship goes back to the days when Boyd was a television reporter and Osterreicher was a cameraman for Eyewitness News, on Channel 7. They remained close even after they both went to law school and began new careers.

Boyd, a cancer survivor, knew Osterreicher was a good friend of Mitch Flynn, founder of the ride, and that Osterreicher had raised around $100,000 for Roswell during almost 20 years of taking part.

So Boyd stepped in to ride for Osterreicher a year ago, a way of making sure that fundraising continued. Osterreicher, who is married to Cathaleen Curtiss, The Buffalo News director of photography, showed up to watch the Peloton begin. 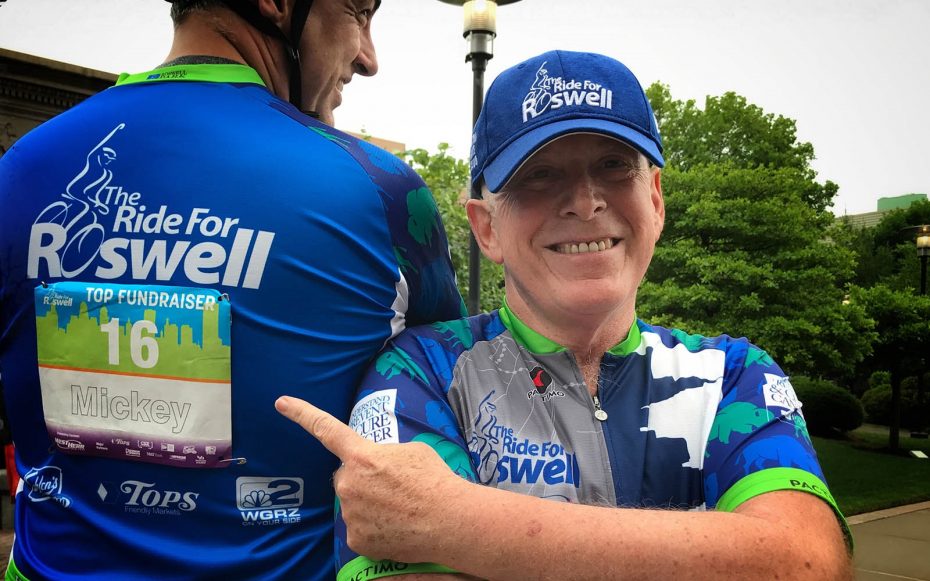 Mickey Osterreicher with Steve Boyd, a close friend who rode in Osterreicher's place while he recovered from surgery for brain cancer a year ago. (Cathaleen Curtiss/The Buffalo News)

Boyd remembers sitting with Osterreicher in the days after his friend learned about the cancer. While they both knew all the probabilities about the disease, Boyd said Osterreicher lives his life in this way:

There are the laws of physics, and there's Mickey.

Boyd said to him, "You can't listen to statistics. You'll have to Mickey this."

The advice suits Osterreicher, who chose to be aggressive. He went through a frightening and difficult setback when he had a massive reaction to immunotherapy treatments intended to attack his cancer. They did, but they also "attacked every muscle in my body," Osterreicher said.

The immunotherapy was followed by myocarditis, an inflammation of the heart muscle, and myasthenia gravis, a chronic autoimmune neuromuscular disease. The treatments to counteract those conditions began eating away at his muscle.

He lost 40 pounds. For a time, Osterreicher had trouble speaking. At the worst point, it was hard for him to climb a single step.

Osterreicher looked to his family and his work, at a time when he said First Amendment rights for journalists are more important than ever. That focus, that cause, became a conduit to healing. Gradually, Osterreicher rebuilt his strength.

Sean Kirst: Cancer survivor rides for Roswell – and for the doctor who saved him

Last year, he greeted his second grandchild, Ari. He has gone to more than 40 national conferences since his surgery.

And he set his sights on the Peloton, on this "labor of love" for Roswell, a hospital he describes as a civic resource whose sheer magnitude is easy to overlook.

Tonight, when the event begins, Osterreicher will be riding.

Looking back on the situation a year ago, Boyd said the achievement, in some ways, seems beyond belief.

Then again, Boyd knows Osterreicher as well as anyone. He intends to be cheering in the crowd tonight, at the start of another Ride for Roswell, as the guy leading column two goes out there to "Mickey it."