That's how much milk it takes to replenish the company's supply of raw material for making cheese. The milk keeps coming, and the South Buffalo plant keeps churning out mozzarella, ricotta, shredded cheese and industrial powders.

The plant for years was known as Sorrento Cheese (and to some, may always be). France-based Lactalis bought Sorrento in 1992 and retired the Sorrento brand name about five years ago in favor of Galbani, which has a global identity.

There's much more to Lactalis' complex than meets the eye from the outside on South Park Avenue, just north of the Buffalo and Erie County Botanical Gardens. For starters, 582 people work there, including 358 in the plant and 224 in its corporate offices. Buffalo serves as headquarters for Lactalis' U.S. operations, which keep growing through acquisitions.

The company has poured $30 million worth of investment into the Buffalo site since 2012 and has added 32 new jobs since 2014, said Thierry Clement, Lactalis American Group's CEO.

Lactalis buys $90 million worth of milk a year from 340 area dairy farmers. All of those milk trucks, arriving throughout the day, add up to 750 million pounds of milk processed annually at the plant.

The plant makes cheese almost every day of the year, and even on those days off, the milk trucks keep arriving.

"The cows don't stop, so either plants like us take it or the farmers have to dump it, and we don't want that" to happen, said William Senay, who has been the plant director for 37 years.

A sample from each milk delivery is tested in a Lactalis laboratory to ensure it meets health standards. Once a shipment is cleared, the milk is pumped into tanks on the property. About 2 million to 2.5 million pounds of raw milk are stored on site each day.

"And that's just about what we're turning on a daily basis," Senay said. 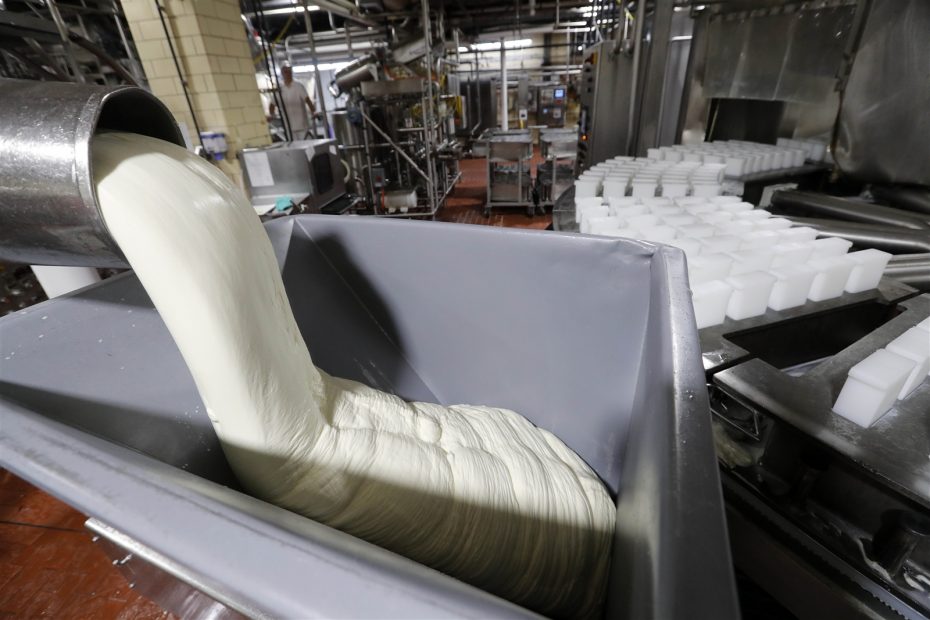 Mozzarella cheese is poured into a machine that will form it into its block shape. (Mark Mulville/Buffalo News)

The plant's interior is a vast network of vats, cookers and other machines, making different types of cheese. But all of the technology remains under the guiding hand of employees, about 12 percent of whom have worked at the plant for 30 or more years, Senay said.

In one section of the plant, pieces of mozzarella cheese float in brine for about 90 minutes, their last stop before being packaged under the Galbani name. The brine, kept at a temperature of 35 to 38 degrees, cools off the cheese, while the salt adds flavor and helps preserve the product.

Elsewhere in the plant, employees send chunks of cheese up a conveyor into a machine to create shredded cheese. The plant processes 10,000 to 12,000 pounds of shredded cheese products per hour, Senay said.

"The No. 1 use of the shredded cheese is for pizza, and we all know how pizza has grown not only across the U.S., but globally," he said. Its shredded cheese is used everywhere from high-end restaurants to local pizza shops to frozen-food manufacturers.

"You see a lot of frozen pizzas in the grocery store – you can bet a lot of the cheese is from here," Senay said.

Senay said Galbani is the U.S. market leader in ricotta cheese, used mainly in entrees like lasagna and stuffed shells. The Buffalo plant is Lactalis' only U.S. plant that makes ricotta cheese.

Clement, the CEO, said the Buffalo plant has proved productive over the years and that the Buffalo site benefits from Lactalis' growth around the country.

"We continue to invest, and we have a big ambition in this country," Clement said.