DALLAS — At 4:41 p.m., a family of five filed quietly down the steps of the American Airlines Center until they reached the front of the lower bowl. “These are your seats,” said a woman who worked for the National Hockey League. She pointed to a white-and-green fabric covering slipped snugly over an empty seat. The word emblazoned on it: DAHLIN.

Rasmus Dahlin, wearing a dark suit and skinny tie that would soon be obscured by a hockey jersey, entered first. Behind him was his 13-year-old sister, Ella, who sat next to her big brother and gazed upward through her glasses, taking in the green and white spotlights that bathed the National Hockey League Draft stage. Dahlin looked up, too, and for a brief moment, the siblings took in what was about to happen.

Soon after came the rest of the Dahlin family: Rasmus’ older brother Felix; his father, Martin, and mother, Asa. Of the many young men who were slated to be drafted on the Friday evening of June 22, Rasmus and the Dahlins were the first family to settle into their seats. That is apropos, because Dahlin – an 18-year-old Swedish defenseman – was unquestionably expected to be chosen first overall in the draft.

That opening pick belonged to the Buffalo Sabres, who draft-day table was only feet away on the arena floor. A photographer took a photo for the Dahlins and said to Rasmus, “Welcome to Buffalo.”

Dahlin has known he was Buffalo-bound since the Sabres won the first overall pick in the NHL draft lottery nearly two months ago. But, like Sabres officials, he has been careful not to call it a sure thing until it is a sure thing.

“We’ll know in an hour,” Dahlin responded. He also mentioned that falling asleep the night before felt like Christmas Eve: Excitement, nervousness, anticipation. His 20-year-old brother Felix, who shared a hotel room with Rasmus, said later, “He was focused. Kind of like he is before a game, I think. He was super excited. He just wanted to do this and experience everything.”

The experience was about to begin. 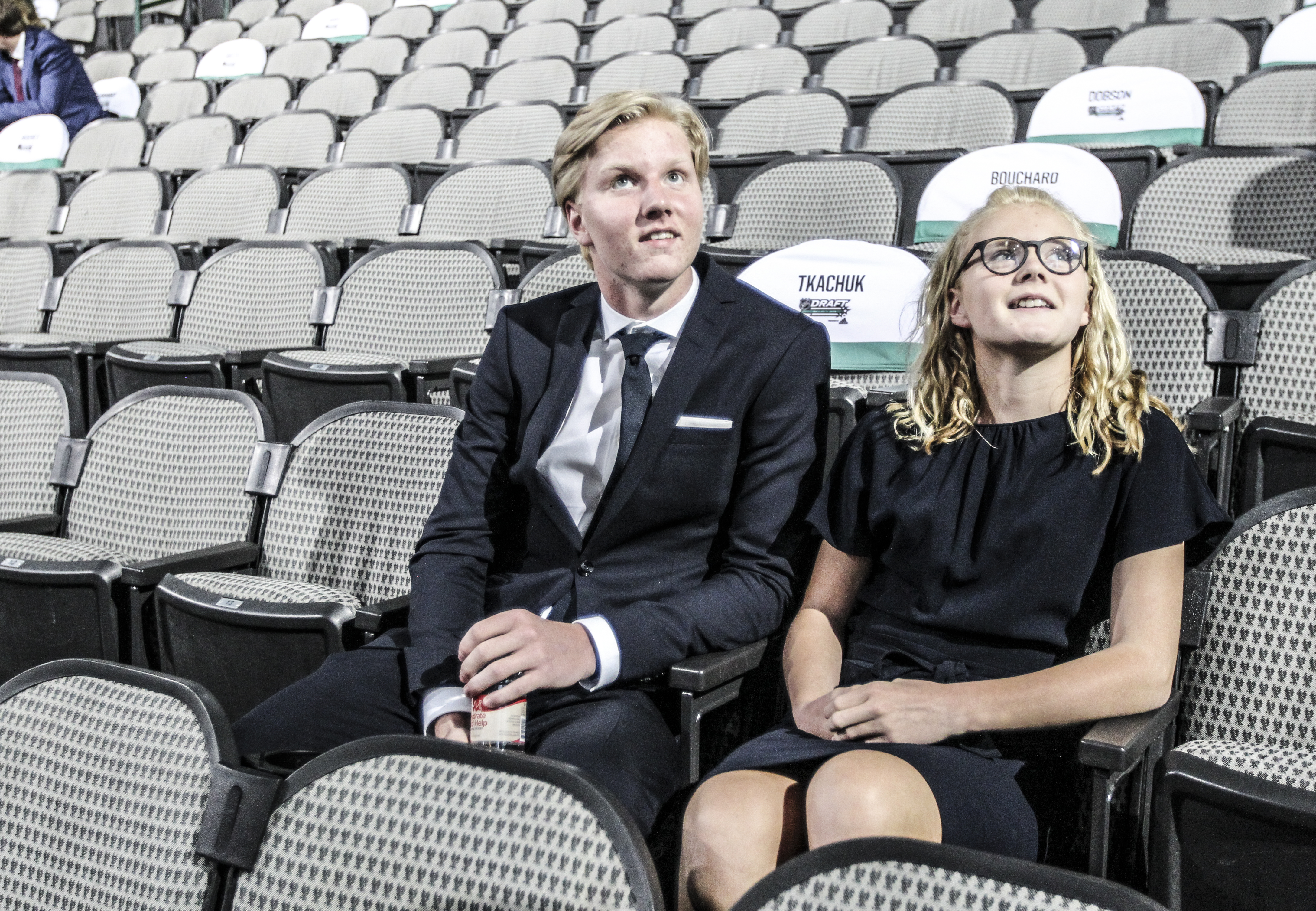 Moments before the Dahlins’ arrival, team co-owner and President Kim Pegula was escorted down the same steps and to her team’s spot near the stage. The Sabres’ table was buzzing already: General Manager Jason Botterill was talking to team owner Terry Pegula. Assistant general managers and scouts milled about, though at this point, the bulk of their work was done.

Rasmus Dahlin on his arrival in Buffalo: 'Finally I'm here'
Gallery: Rasmus Dahlin's big night
Mike Harrington: Sabres must capitalize on Dahlin's impact
Rasmus Dahlin after he was drafted: 'I love to call my new town Buffalo'
Finally a Sabre: In a frozen moment, Dahlin (and mom) are Buffalo-bound

The draft itself is the culmination of two months of planning and a season or more of scouting. The Sabres’ amateur scouting staff convened in early May – shortly after the end of the NHL regular season – and compared lists of prospects they felt should be on the team’s draft radar. From there, they came up with a master list that tiers the prospects from higher to lower priority. Dahlin, of course, was on top.

That list served as a guide for which players the team most wanted to meet with and interview during the NHL Combine, which took place in Buffalo in late May and early June. Beyond sport and physical evaluations by hockey and medical personnel, the Sabres’ communications staff also met with top prospects. Sabres officials, knowing that Dahlin was theirs for the taking, took the extra opportunity to get to know him. (Six other teams met with Dahlin as well, perhaps hoping they could snag the top choice in a trade.)

“Rasmus is very calm and comfortable in himself, which exudes that confidence when he’s doing all these interviews and meeting all these players,” said Chris Bandura, the Sabres’ vice president of media relations, who met multiple times with Dahlin. “He’s very mature for a young kid. You would never guess his age if you see how he acts and interacts with different people, anywhere from reporters to cameramen even to team representatives.”

Despite Dahlin’s remark that his future would be known “in an hour,” it was actually two hours before the Sabres were on the clock with the draft’s opening pick. The actual draft pick – for every round – is submitted electronically by Austin Dunne, the team’s amateur scouting coordinator, who mans a computer at the draft table.

When that happens, team officials announce the choice from the podium. In what was easily the least-dramatic moment of the evening, Botterill took the stage, surrounded by several Sabres officials, and said, “On behalf of our great fans in Western New York, the Buffalo Sabres are proud to select Frölunda defenseman Rasmus Dahlin.”

Least dramatic for everyone who isn’t named Dahlin, that is. “It wasn’t real until they were calling his name,” Rasmus’ mother Asa said later.

When Martin and Asa Dahlin heard their son’s name, the next few seconds stretched into a slow-motion flood of emotions. “Just freezing for a moment,” Asa said.

“All feelings were rushing through the body,” Martin added.

Those feelings were captured in what happened next: Rasmus stood, embraced his brother, then his sister, who was fighting tears. He hugged his father, and his mother, whose eyes glistened like her daughter.

From there, Dahlin descended a few steps, where the Sabres’ Bandura was waiting for him with a cap and jersey that already had his name on it. This is where, in a moment that can be overwhelming for a young athlete, Bandura’s time spent getting to know the prospects can pay off. “It’s always a good feeling for them to see a familiar face right away,” he said. “When their names are called, their minds are swirling.”

When Dahlin removed his suit coat and slipped into his blue Sabres jersey and cap, it kicked off an intense and highly choreographed two hours. First he went onstage, where he shook hands with NHL Commissioner Gary Bettman and Sabres officials. They posed for photos, and then Dahlin stepped to the side of the stage to do interviews with NHL rights holders. After that, he visited the Sabres draft table to say hello the scouts and administrators, then was escorted by Bandura and NHL officials to the media room, where he spoke in an English news conference, then a Swedish news conference, and then did several short one-on-one interviews.

“When can I see my family?” he asked after the gauntlet of interviews.

Dahlin’s next stop was the “Photo Tank” — a web of rooms where he posed for Getty Images, NHL Images, the Upper Deck sports cards company, and for NHL consumer products licensing. He also posed for a top three photo with the second and third picks and stopped in a room to sign several pucks and caps.

It wasn’t the first VIP congratulatory call or message. Earlier in the evening, the Canadian network Sportsnet showed a recorded message from Mats Sundin, who is the only other Swede to be drafted first overall. “Welcome to the National Hockey League,” said Sundin, who was drafted in 1989 by the Quebec Nordiques. “WE are No. 1!”

Dahlin was at a loss for words. “I’m overcome with emotion at seeing that,” he said.

Welcome to Buffalo @rasmusdahlin00! Can’t wait to watch you play, wings on me later this summer. #LetsGoBuffalo
Is #SabresMafia a thing? It is now.

He was overcome, too, when nearly two hours after his name was called, he finally got to see his family in the arena’s basement hallway. Felix got his brother first, slapping hands and wrapping both arms around him. Rasmus then leaned over to hug Ella, who gazed up at her brother like she had at the arena lights earlier in the evening.

Asa Dahlin wrapped her right arm tightly around her son’s neck, and his father Martin did the same, slapping and squeezing Rasmus’ shoulder.

Next week, Dahlin will be in Buffalo for the Sabres’ June 27-30 developmental camp. The family will be joining him, and Asa Dahlin is planning to move to Buffalo with her son. “He’s been living away for three years now,” said Asa, referring to Rasmus’ time playing hockey in Sweden, “so he’s used to that. But I think it’s important to have someone living there when he lives so far.”

Rasmus Dahlin, finally reunited with his family after getting chosen no. 1 in the #NHLDraft18 by the Buffalo Sabres pic.twitter.com/cub0dhaWpX

While their son was chugging through the grip-and-grin duties of a first-rounder, the rest of the Dahlin family had a bit of time to reflect on what that moment – that stretched-out, much-anticipated, emotionally soaked moment when his name was called – had been like.

“It’s amazing,” Martin said. “It’s so hard to put words on the feelings."

“It’s huge,” Martin repeated. “We know how much it means for Rasmus because this is his dream, always his dream. He’s always wanted to play NHL hockey, and hopefully he’ll get the chance soon. It’s fantastic. It’s a fantastic day.”

“I could tell that he was so happy when they called his name,” Felix said.

Asa added, “So excited to start his season.”