Helen Pilger finally got to use one of her Christmas presents this week, as morning grayness turned to sunshine during a two-hour tour of what some in Buffalo call the Millionaire Mile.

More than a dozen mansions and other landmarks – most built in the two decades after the U.S. financial panic of 1893 – flank Medina sandstone sidewalks on this stretch of Delaware Avenue.

Thousands of motorists whisk by these historic sites daily. Pilger and several others chose to experience them on foot as part of an Explore Buffalo tour.

"It was grand," said Pilger, 72, of Hamburg. "It's the first time in all my years I know what all those houses were. I enjoyed the beautiful weather – and walking is good."

This is what Pilger's daughters, Sheila Price and Rhonda Marie Pilger, had in mind last December when they bought their mother an annual Explorer Pass from the nonprofit group that leads more than 80 walking, biking, boat and bus tours across the region.

Pilger plans to spend lots more time stretching her legs in coming weeks, an endeavor that will be fun and easy to accomplish in a region that has become rife with outdoor summer fitness opportunities.

Others will dance, contort and sweat through group fitness classes in parks and along the waterfront, bike on streets and on trails that snake through dozens of communities, and run races that benefit worthy causes.

Almost everyone will walk more often – and that, too, is a worthy pursuit, said Philip L. Haberstro, executive director of the Wellness Institute of Greater Buffalo.

Haberstro counts Explore Buffalo as a key player in the Wellness Institute's annual walking challenge, which looks to surpass 100 million steps during organized walks in the region this year. The decades-old institute has encouraged the growth of the tour group since it was established in late 2013. It has seen increased participation while it's moved along, and it accounted for 39.6 million steps during last year's walking challenge.

"This is a hidden benefit they hadn't really thought about at first," Haberstro said. "They were so focused on the learning experience, but walking is the grand slam of physical activities." 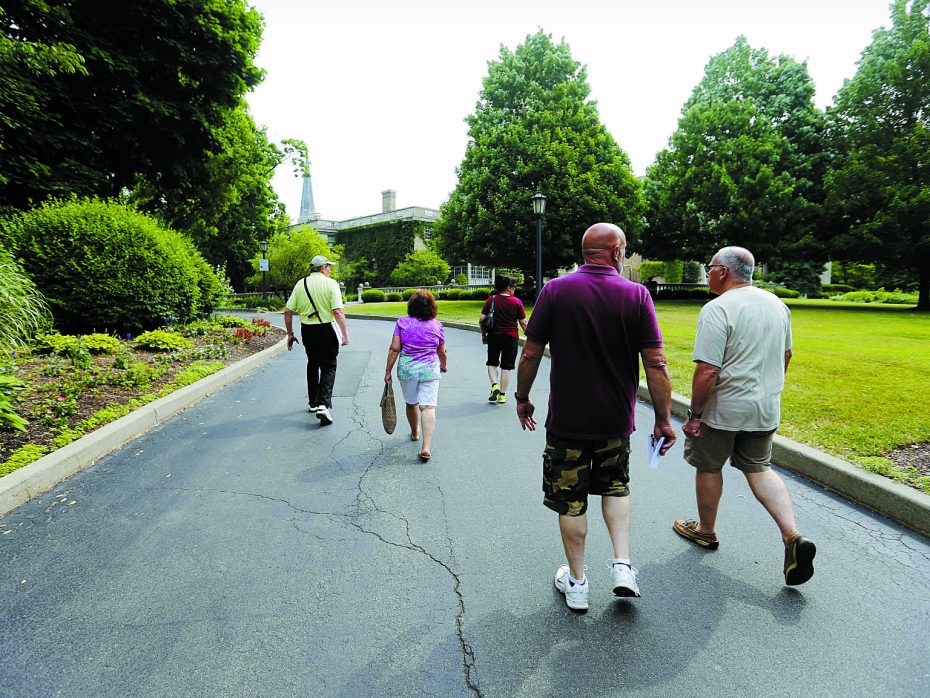 Walking 150 minutes a week at a moderate pace boosts health and generally lowers health care costs, Haberstro said. It brings social benefits. From an environmental perspective, it reduces the carbon footprint. It lowers stress while it spurs brainpower.

"There's also what you see when you walk, much more than when you're on a bike, but certainly more than in an automobile," he said.

Pilger, a retired mental health aide, experienced that on Monday with Price, her daughter, who lives in Brant and was on vacation from her job in the radiology department at Erie County Medical Center. Accompanying them on the tour were Amherst residents David Stier, who took the day off from his pricing analyst job at Avox Aeronautics Systems in Lancaster, and Jim Bardot, a retired educator.

Harry Meyer, a retired lawyer with Hodgson Russ and volunteer Explore Buffalo docent, put the others through the paces. He called the effort a "Talking Proud" look at Buffalo.

The group paused at 18 sites between North and Bryant streets during an almost a 1.5-mile walk.

Stops included the 16,000-square-foot Butler mansion, once occupied by the family that used to own The Buffalo News; the Clement House, a Tudor revival-style structure designed by architect E.B. Green and donated to the regional chapter of the American Red Cross in 1941; and the Williams-Pratt, Knox and Goodyear mansions.

The group slipped in to the front entrance at Westminster Presbyterian Church to glimpse a stained-glass window that depicts 128 Bible stories. They also learned about the star in the window of the former regional headquarters of Texaco, built at 742 Delaware after the Dexter Rumsey House was demolished; only the pineapple-shaped entry gate and wrought-iron fence remain from the earlier era.

Though sparsely attended Monday, the Delaware Avenue Mansions tour – given most weekdays in summer – is among the most popular of Explore Buffalo tours, said Brad Hahn, executive director.

"The majority are walking tours," Hahn said, "which we have in the City of Buffalo on the waterfront, downtown, in city neighborhoods from Black Rock to the First Ward, and everywhere in between. We also have tours outside the city and we've been making an effort to offer more."

A new weekly tour in Williamsville has been "very popular," Hahn said, and Explore Buffalo will start offering a tour in the village of Orchard Park in July. Tours also take place once or twice a month in Hamburg, East Aurora, Lancaster, Clarence Hollow and the City of Lockport.

Volunteer docents – who come from all backgrounds but have a shared love of landmarks, culture and history – develop the tours.

"Our people generally aren't shy. They want to tell Buffalo stories and they love to have an audience," Hahn said. 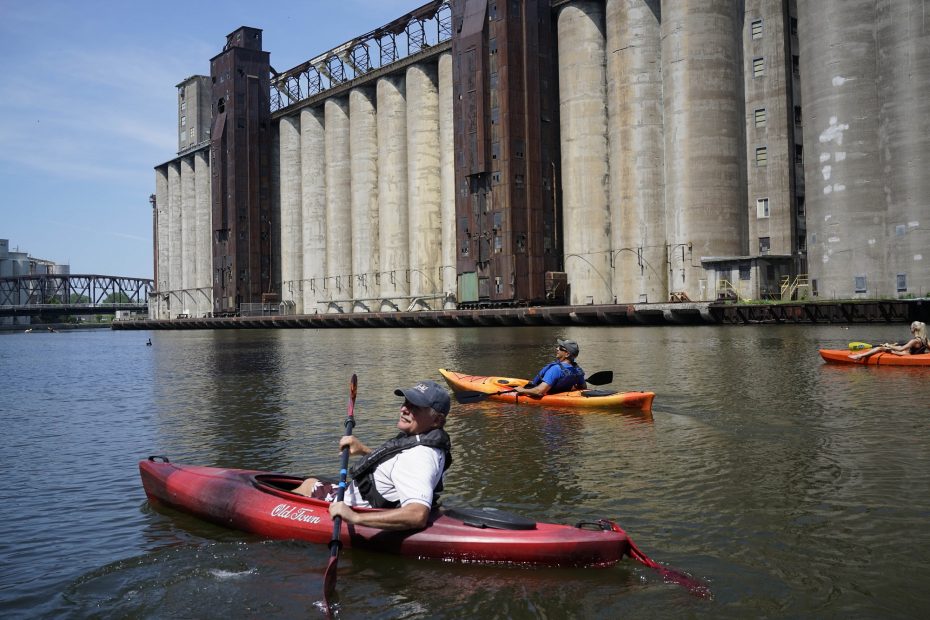 The most physically demanding tours in the lineup are the weekend kayak excursions on the Buffalo River, which provide a good upper body workout, and Silo City Vertical tours, which take people up and down 12 to 15 stories. "It's about 270 steps to the top," Hahn said.

Pilger aims to keep both her feet on the ground.

Her next planned excursion? A Friday evening Mob Tour in Allentown.

What: The nonprofit group launched in late 2013 to provide walking, biking, boating and bus tours, and other opportunities, to help Western New York residents and visitors discover the region’s great architecture, history, and neighborhoods.

Where: Tours, generally about two hours in length, take place most days and evenings in spots across Buffalo, as well as several villages, small cities and hamlets in Erie and Niagara counties.

Who: The backbone of the organization is its 215 volunteers, including 110 trained docents who lead tours. “We have a healthy number of retirees who volunteer with us but also have college students and people working in a wide variety of fields,” Executive Director Brad Hahn said. “What is common among them is they have a great passion, a great love, for Buffalo – and a desire to tell people about it.”

Expense: Cost for walking tours is generally $15 for adults and $5 for children and students. Kayaking (with a kayak rental included) costs $45; City of Light bus tour is $40.

Explorer Pass: Costs $50 for a full year; can take as many walking tours as you’d like at no additional cost and $5 discounts on other kinds of tours.